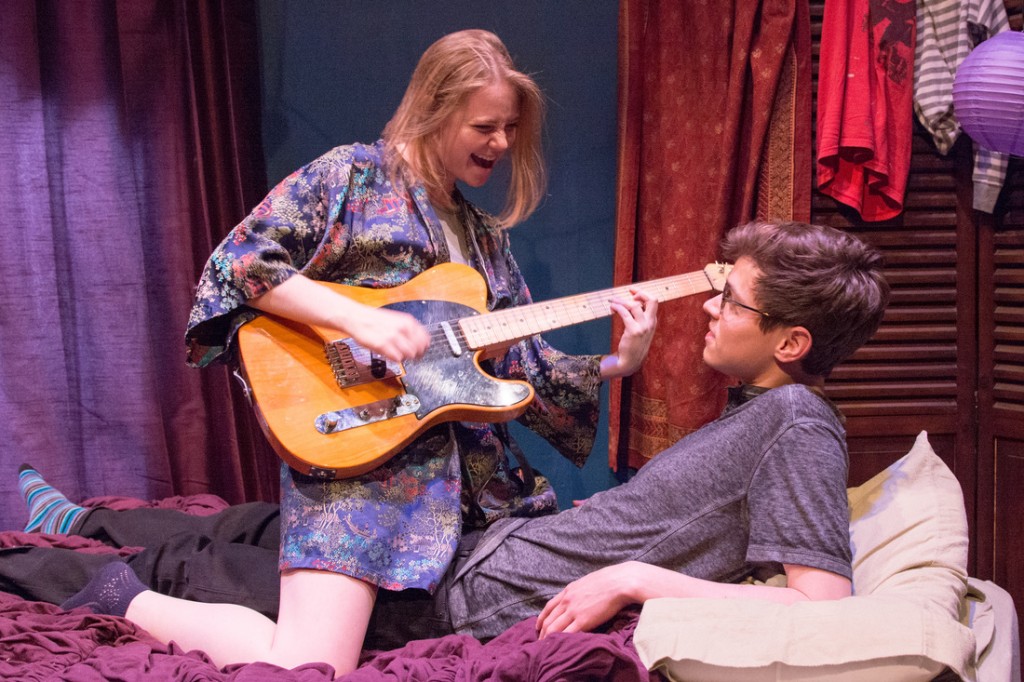 This same problem plagues InFusion Theatre Company’s “Another Kind of Love.” Performing in the Chopin Theatre’s main space, with its high ceilings and deep stage, the director and actors fail to bring a show that can fill it. Voices drift up into the rafters and stick there. Performances are flattened out till they become a kind of pizzicato monotone.

Written by playwright Crystal Skillman with original songs by “Passing Strange” co-writer Heidi Rodewald, the play follows the living room reunion of three ex-bandmate sisters: lead guitarist Kit (Annie Prichard), drummer Collin (Amber Kelly), and bassist Tanya (Courtney Jones). Their mother, Melanie Singer, was a famous rock star in her own right before committing suicide when the girls were young. (Set in Olympia Washington, the play leans into its Kurt Cobain parallels.) Their band, Dark Hearts, is reuniting to play a one-off benefit concert commemorating their mother’s death. Tanya, fifteen years sober, hasn’t picked up a bass in just as long, focusing instead on raising her daughter Max (Alison Hixon) who nonetheless fancies herself an aspiring rock goddess and worships her aunt Kit.

Skillman has created a fun family reckoning even if the musical aspects feel a bit like “Behind The Music” clichés. And the show could definitely use more of Rodewald’s dark, grungy anthems. But it’s director Mitch Golob who hides the performers behind a wide wooden deck—used for the concert finale—that puts them at too much of a distance. A lack of shape to the scenes and the individual character arcs, sacrificed for what seems like a punk-infused emphasis on speedy dialogue, only heightens this disconnect. The audience is left stranded at the back of the crowd, straining to hear the music. (Alex Huntsberger)