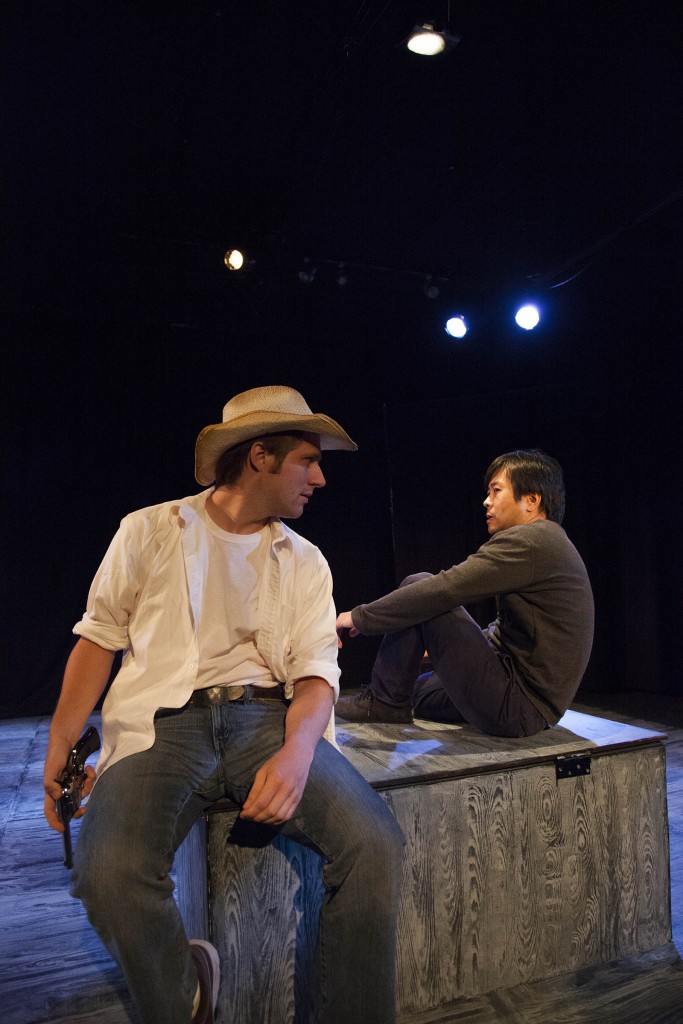 That title is a little misleading. Or it’s not so much misleading as it is entirely metaphorical. Michael Golamco’s “Cowboy Versus Samurai, ” being given its Chicago premiere here by A-Squared Theatre Workshop, doesn’t actually involve any scenes of cowboys battling it out with samurai. It is not a descendant of “Shanghai Noon.”

Instead, it is a pleasant, sometimes kind of milquetoast story about an Asian-American man, Travis (Cary Shoda), whose quiet small-town Wyoming life is disrupted when a beautiful Asian-American woman, Veronica (Aja Wiltshire) moves into town. This brings the total Asian-American population of said town up to three, the third one being Travis’ goofily militant “friend” Chester (Jin Kim). Travis is instantly smitten with Veronica but it turns out there’s a problem: she only dates white guys. So Travis then puts on his Cyrano de Bergerac pants and starts composing love letters for Veronica on behalf of his sweet, dumb cowboy friend Del (Chris Lysy).

Those letters are the play’s strongest moments. They are funny and dark and surreal and very touching. The rest of the show, directed by Marc Rita, never quite matches. The conflicts are everyday ones, matters of the heart and the head, but still the story’s pulse never rises above a steady, undulating beat. Happily, there is a generosity of spirit to both the script and the production that will leave you smiling. These are not bad people, they are just a little mixed-up, and spending time in their company is time pleasantly spent. (It’s the antithesis of Neil LaBute, which is always welcome.)

The production is a sparse one: a painted floor, a large box with a lid, black curtains, a few props. This sparseness combined with the absence of fervor in the performances means that sometimes the audience’s attention will wander. Mr. Rita has also tried to weave in some performance techniques from the Japanese Noh style of theater, but the effect doesn’t translate. Mostly it means one person staring blankly forward for an entire scene. It might work as a metaphor, but it doesn’t work as a play. (Alex Huntsberger)