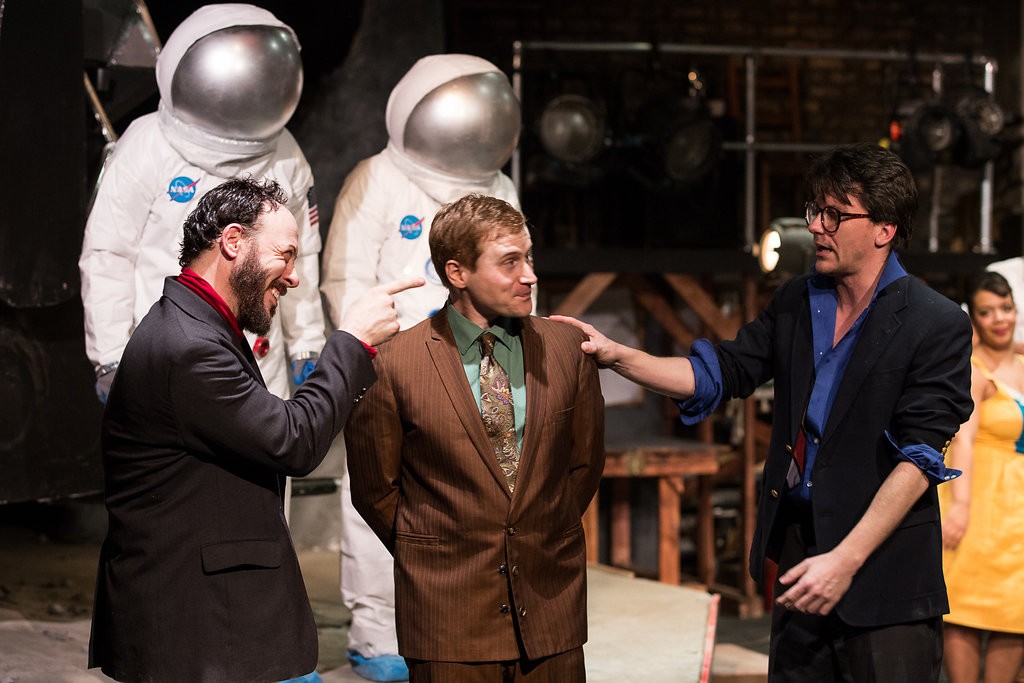 Why is it that conspiracy theories like, say, the one about the US government hiring director Stanley Kubrick to fake the moon landing, continue to endure? Is the belief in a vast conspiracy underlining all things really all that different from a belief in the innate, inalienable righteousness of one’s country? Could a man who lied to America about the moon landing then go on to lie about something bigger? Like maybe a war?

Patriotic paranoia is what rocket-fuels “Lunacy! (A Cryptohistorical Comedy)” from playwright Andrew Burden Swanson and Jackalope Theatre. Directed with gusto (occasionally too much gusto) by Gus Menary, the play is a jittery, paranoid farce. It’s about madmen doing the wrong things for what they think are the right reasons… and the inevitable fallout for those under their command.

The madcap centerpiece is a young Donald Rumsfeld (Scot West) who has been tasked by Nixon with filming the moon landing. With his NASA scientists on one side and Kubrick’s bewildered British production crew on the other, Rumsfeld tries to lead them to the shining city on the hill but is entirely lost in a cloud of his own BS. The psychotic zen koan manner of Swanson’s writing and West’s alpha-nerd delivery meld perfectly. He is ludicrously watchable.

However the entire evening is not one built with NASA-like precision. It is rickety for most of its run time and then completely burns up on re-entry. The performances—save for Malcolm Callan’s soulful Kubrick and Robert Koon’s level-headed Scottish cameraman, Ted—are overblown. There is mugging on top of mugging. Scenes often stop dead so that one character or another can have a weird comedic moment. This unwillingness to jettison anything continually hinders the comedic velocity.

However, the play could still work, landing miles off target, maybe, but still landing safely, if it weren’t for the final twenty minutes, when the play finally does jettison something: its curiosity. It forgoes paranoid intrigue in favor of classic farcical contrivance, getting louder and broader but duller too. Like Rumsfeld, the play never seems to consider the possibility that it could fail. Which is why it does. (Alex Huntsberger)