Gloria Estefan has made an international career out of singing and dancing, the very essence of what happens in a Broadway musical. As such, it might seem she would be a natural to play herself in “On Your Feet! The Story of Emilio & Gloria Estefan,” which is having its pre-Broadway world premiere performances in Chicago.

“I’m too old,” Estefan admits. “The span of time is me between seventeen and thirty-two, which is the age I was when I had my accident and broke my back and they said I would probably never walk again, let alone perform.

“And it’s kind of weird to play yourself. You know, it’s funny, my daughter is an amazing singer and she’s at Berklee College of Music and is just stepping out. Everybody is saying ‘Oh my God, she should play you,’ because she’s like my clone, this little girl. Ridiculous pipes, she plays every instrument, she’s an amazing drummer, so musical. Her reaction was, ‘Mom, I’d have to kiss Dad!’ She’s not in the play as a character because she didn’t exist at the time that we’re covering in the play. But it’s fantastic to me that she co-wrote an original tune that’s a pivotal scene in the play that is very emotional.”

Did Estefan grow up as a fan of Broadway shows? “Very much so,” she confesses. “I couldn’t afford to come to Broadway but when I was in high school, they would bring the shows to [Miami.] This was the seventies, so it was very revolutionary and sexually forward. I saw ‘Equus,’ ‘Jesus Christ Superstar,’ and ‘Hair,’ so the first naked bodies that I ever saw in my life were in Broadway productions. From the minute my kids could sit still, they came to shows and loved them. My son did a cameo in the movie ‘Newsies’ with Kenny Ortega back in the day. On my daughter’s thirteenth birthday, she wanted to bring five friends to New York and for four days, we saw every show we could possibly see, evenings and the two matinees. That’s all we did, was watch shows.”

Curiously, Estefan herself has never performed in a Broadway show. “I have been offered many, many times, to perform on the Broadway stage, but can I be honest with you? It’s a lot of work! I have great respect for Broadway performers because they’re the real deal. They get out there every night, they sing, they dance, they act, people don’t know how difficult that is. And that they do it every night eight times a week and every time it’s exciting, every time it’s fantastic, it’s really an amazing medium. Live musicians playing, it’s a very unique thing.”

During high school, Estefan was in the Glee Club and sang in the choir but never even considered trying out for a musical. “I would have been way too shy to actually be a performer in the front of the stage. It took me a good ten years in the band [Miami Sound Machine] even to get used to being the frontman… But music was my love. It was something that was so natural to me. Then I joined the band for fun and then eventually, I like to do things well, so it took me a while to say, ‘Okay, I’m in the front now, so I’ve got to get with the program and be the best I can be.’ But that’s not my nature and that’s part of the story. It’s really not my nature to be the center of attention.

“My Mom was a diva. In Cuba, she was the star of her school, she won a contest to be Shirley Temple’s double back when she was a kid, she performed all the time. To her, it was a natural thing, but I have more of my Dad’s temperament. I’m very laid back, I’m very low key. I love, love music and I sang since I could talk. But music was very much a private catharsis. Since we had a very tough life later on with my dad being ill and everything that went down, music was my escape.” 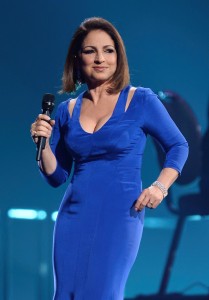 Shy daughter that becomes a star, controlling naturally performing mother that never did? Sounds a lot like “Gypsy.” “Well, you know what? In a way, it is! I’ve seen it with Patti LuPone, with Bernadette Peters, with Tyne Daly. Every time it is produced I see it and I was a huge fan of the movie. In many ways, I relate.” A key difference, however, is that Estefan’s mother was not initially a fan of her performing professionally. “My mother had a Ph.D. in education and if we had stayed in Cuba, anything in the entertainment industry—which was really more of a taboo there—would have been unacceptable to her. She wasn’t happy about it even here which, by the way, is part of the conflict of the story. She really gave Emilio a run for his money and it took a long time before she accepted him. The writer of the show told us, ‘You guys are a nightmare to write because you have no conflict.’ Until he met my mother! She’s a very pivotal and central figure in the story.”

As for Emilio Estefan, the leader of the Miami Sound Machine that Gloria has been married to for thirty-seven years, “he was my first, and only love,” she says unabashedly. “I didn’t think I would get married, I wasn’t interested in it at all. I was going to go to Paris and study international law in French. I had studied psychology and communications and my minor was French. Marriage was not on my radar because I had been taking care of my dad and the first time he was in the hospital and I had free time, the last thing I wanted to do was tie myself down. But I joined the band, Emilio was my boss, it all happened very naturally. We’re very different, which is great because we balance each other out. But when it comes to the real things in life that either break you up or keep you together, your priorities, your values, we rarely argue. We’re on the same page for business, we rarely disagree musically.

“We grew together, we didn’t grow apart. Every step of the way, we were each other’s cheerleaders. We had to battle the record companies, and people’s expectations, we did that together. And when he started producing other people, by the way, I was incredibly supportive. He even knocked me out of the number-one spot with one of his other artist’s productions! I said, ‘Dude, you’re still my manager!’ But I was also very proud of him. He also did that to lessen the pressure for me, so that my career wasn’t our only and central thing that we do in life. He also had so much to offer, so many incredible artists, and I’m very proud of him for that.”

Estefan also sees her story as a classic example of the American Dream. “This is truly the only country where you are not held back by who you are or where you’re born. The only thing that can hold you back is your own drive or how much work you decide to put into your dreams. I don’t think this could have happened anywhere else. This is one of the few countries in the world where each life is a blank slate that can be filled in by the person. It’s not perfect, no country is, but this is truly one of the few places where there are no limitations, only those you set on yourself.”