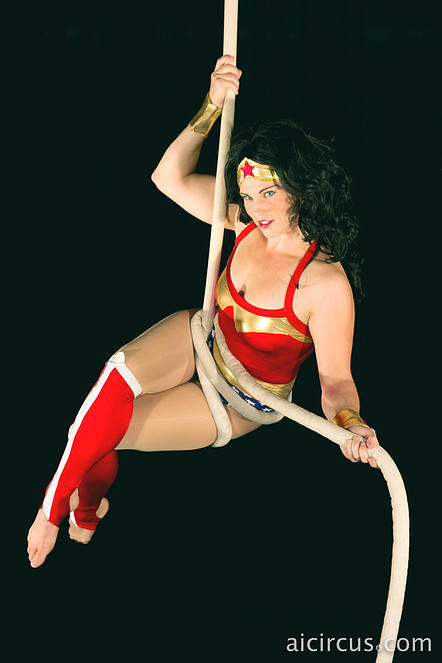 Science fiction, fantasy and comic books are lousy with circuses. From the Flying Graysons to the Circus of Crime to whatever creepy clown Stephen King last wrote about, nerds seem to love a good circus. With this in mind, it seems like a no-brainer that someone somewhere would conceive of a nerd circus where the worlds of fandom and the circus collide. Enter Acrobatica Infiniti Circus.

Acrobatica Infiniti is a community of circus performers dedicated to creating connection between circus performance and geek fandom. Threading the middle of that particular Venn Diagram could have led to an epic disaster of a show, but Acrobatica Infiniti’s “The Nerd Circus” on Friday night was anything but. The show, directed by Tana Karo, and performed for one night only at the Vittum Theater, was funny, thrilling and surprisingly touching.

The night began with an introduction by an MC in a Superman t-shirt. He entered without any of the bombast you would normally expect from a circus ringmaster. At first this choice seemed off-putting, underselling the pomp and circumstance of the show, but over the course of the evening, guiding the audience from one performer to the next, he won us over with his wit, humility, humor and, of course, a few juggling tricks.

Whether it was the Incredible Hulk juggling bowling balls, the Joker and Harley Quinn throwing knives at one another, or Princess Peach exiting Mario’s shadow to ascend a pole and claim a level-ending flag of her own, the performers offered something for every type of fan. Of particular note, one performer did an acrobatics act on a trapeze dressed as Dark Phoenix (the evil, power-mad incarnation of the X-Men’s Jean Grey) that brought the house down.

It would have been easy for Acrobatica Infiniti to simply do a circus show with a nerdy coat of paint. Dressing up a contortionist as Deadpool and having him… contort would be easy enough. But “The Nerd Circus” succeeded because they went beyond simply putting circus performers in cosplay—they allowed the properties upon which their acts were based to really seep into their performances, informing and inspiring each act, giving the sense that each acrobat, clown, and juggler’s devotion to their chosen character was anything but skin deep. This level of genuine commitment more than made up for the few flubs that occurred throughout the show.

Overall, it’s a shame that “The Nerd Circus” only went up for one night at the Vittum. Keep an eye out for Acrobatica Infiniti. They really seem to have tapped into something special with “The Nerd Circus.” (Sean Kelley)