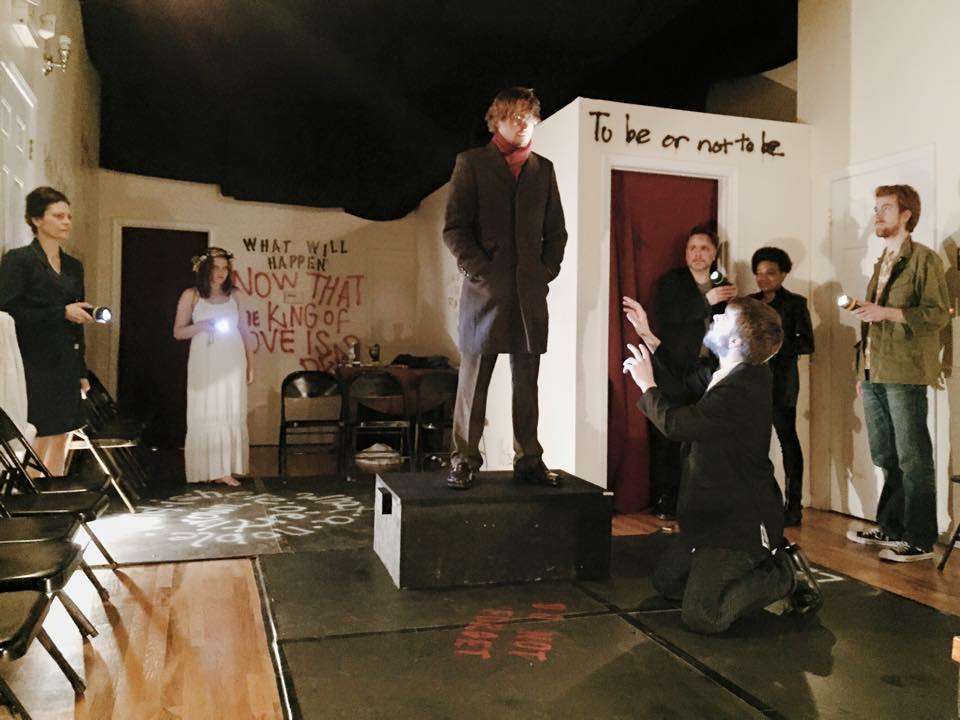 Polish critic Jan Kott likened Hamlet to the surly, punky James Dean, flaunting his alienation like a fashion accessory. Director Dennis McLernon pushes the action a decade later, setting it in a plain, almost prop-less space, garnished with 1960s anti-war graffiti and a growling, Jimi Hendrix-inspired soundscape, courtesy of guitarist Steven Lynn. It’s a potentially clever dramaturgical approach, but the radical sixties look and sound turn out to be mere decorative touches on a play that needs no tacked-on relevance.

The production opens not with the usual first ghostly sighting, but rather with the public celebrity wedding of slick Claudius (Rian Jairell), the new king of Denmark, and his trophy wife Gertrude (Denise Smolarek), the once and future queen. Together with their unctuous advisor Polonius (Joe Feliciano), the royal couple schmoozes with the peasants (played by the audience, ringed around the tiny stage). The matrimonial bliss is marred only by the sulky presence of young Hamlet, radiating some seriously bad vibes. The scene is set for a generational face-off, especially after the spectral Hamlet Senior visits from beyond to inform his son that he was murdered by none other than Claudius, his brother.

Joshua Butler is a natural Hamlet, conveying the prince’s combination of sensitivity and self-absorption, while Lindsay Bartlette Allen’s Ophelia is simultaneously sensual and naïve, a dutiful girl baffled and tormented by a tragic love. The magic collapses in the second half of this truncated adaptation, as Ophelia gives us a mad scene that’s too much hysteria and too little pathos, while the characters increasingly run and shout their way across the stage. What’s lacking is not only rhythm, but also a binding concept of theme and motivation.

For centuries, critics have argued over the inmost meaning of this play. But one message that comes through loud and clear is disgust with false appearances. As he nears his end, Hamlet finally begins to emerge from his protracted adolescence, coming to terms with his situation rather than dramatizing it. For all its admirable economy of means, this production moves toward spectacle rather than clarity, with too much acting out and too little solid storytelling and contained emotion. Gertrude nicely sums up what’s needed here: “More matter and less art.” (Hugh Iglarsh)