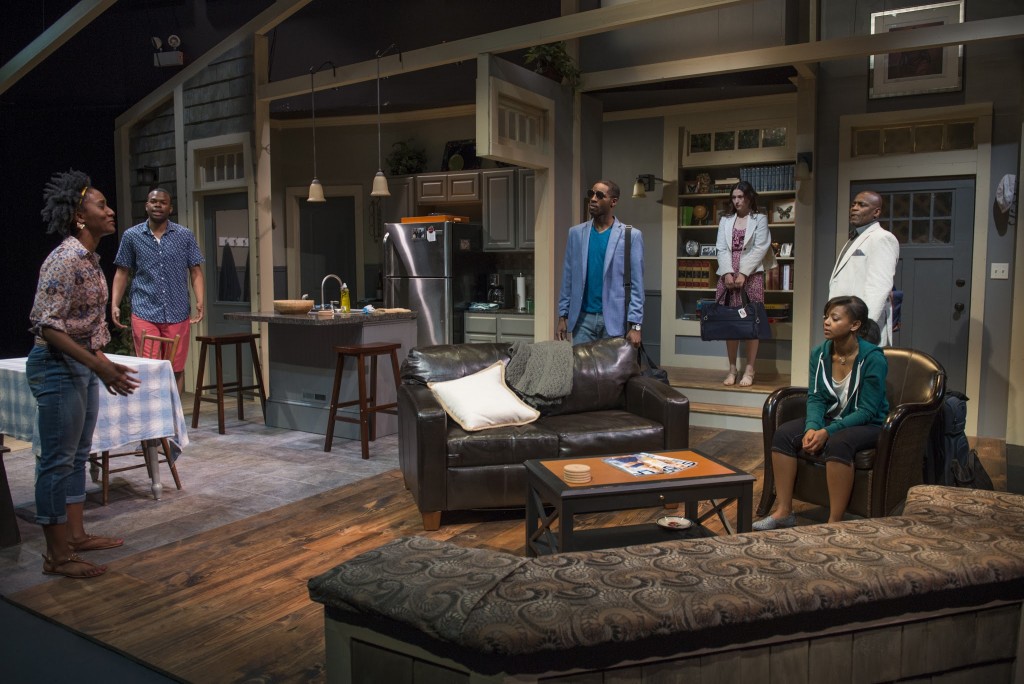 Don’t get too comfortable in the plush space of the new Windy City Playhouse. With the smooth jazz filling the air and comfy leather chairs that hug your body like a lover after a hard day’s work, it’s a hard task. Adding to the comfort, the kitchen and living room you see in front of you seamlessly fits in, to the point that you forget it’s a set designed by Jackie Penrod and not your own. Don’t be fooled. It’s all a part of the seduction to distract you from the chaos that lies ahead.

The LeVays are the epitome of the American Dream. Father of the family Joe (Phillip Edward Van Lear) is a neurosurgeon with two sons who are successful in their own right: Kent (Tyrone Phillips) is a budding novelist and Flip (Michael Pogue) is a plastic surgeon. They bring along the two women in their lives: Kent’s entomologist fiancé Taylor (Celeste Cooper) and Flip’s Italian (you’ll get the joke upon seeing the play) girlfriend Kimber (Kristen Magee). Rounding off the bunch is the family’s housekeeper’s daughter Cheryl (Paige Collins), making sure everything runs smoothly over this weekend in their Martha’s Vineyard home. And everything is going as planned, until their skeletons come crashing from their closet to the floor.

Under the direction of Chuck Smith, Lydia R. Diamond’s “Stick Fly” is a highly entertaining, often funny and beautifully messy family drama. It is not without its limitations, however. There is a lot of debate about race. And while some arguments are hits, such as Taylor’s experience of being an African-American woman dismissed by her colleagues of all races, and even by the men she loves. Others are misses, such as Dr. LeVay’s theory that to come up in the world you need white blood. There is plenty of evidence to the contrary.

Still, watching a family that uses intellectual genius to solve problems in the outside world, yet struggles to find answers to the problems within their own home, is a delight. (Loy Webb).