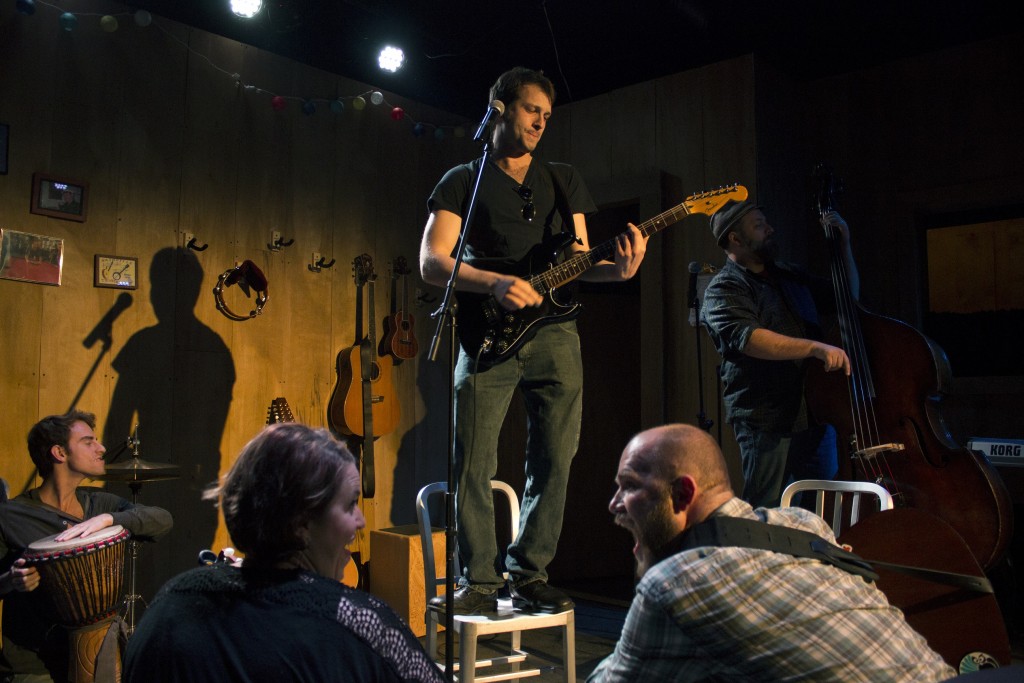 I have to hand it to Underscore Theatre Company; their world-premiere production of “Borderlands:  Three Chords and the Truth” is about as ambitious as it is long. And at more than two hours in length, that is quite a lot of ambition. Picture the characters of “Rent” reunited in a dive bar twenty years later, maybe a little more realistic in what they can accomplish, but still plugging away. And instead of hanging out in Manhattan, they are in Nashville, and their rock opera sensibilities have been traded in for a ukulele, a violin and a few other stringed instruments. If this sounds intriguing, it is, but produced as a full-length musical it lacks enough memorable music and enough character development to truly make it work.

Directed by Alex Higgin-Houser, this musical does have its share of highlights, including a trio of highly talented female voices (Julia Merchant, Sarah Beth Tanner and Dimokratia Michalopoulos) each more soulful than the next. When they’re singing, the audience pays attention. The cast as a group also gels well during the bigger numbers, and a few of the stories, told in open-mic fashion, are amusing enough (including a fanciful extended monologue concerning a feline with a murmur). But too many of the stories ramble on well beyond the interest point of most listeners. They also too often fail to live down to the “rancid layer of failure” established early on by a character when describing his own musical career. One exception to this is Marie’s (Michalopoulos) tragic ballad concerning the first time she had to visit a food pantry.

A musical focused on similar sacrifices made in the pursuit of one’s art might be riveting (again, it worked well for “Rent”). Also interesting would be characters who love and support one another (like they do here) but also possess a fair amount of jealousy and bitterness both toward each other and toward the music industry as a whole. Instead we are left with lovable, but not entirely believable, characters who connect well with one another, but not the audience. Last call here comes at least thirty minutes too late.  (Noel Schecter)