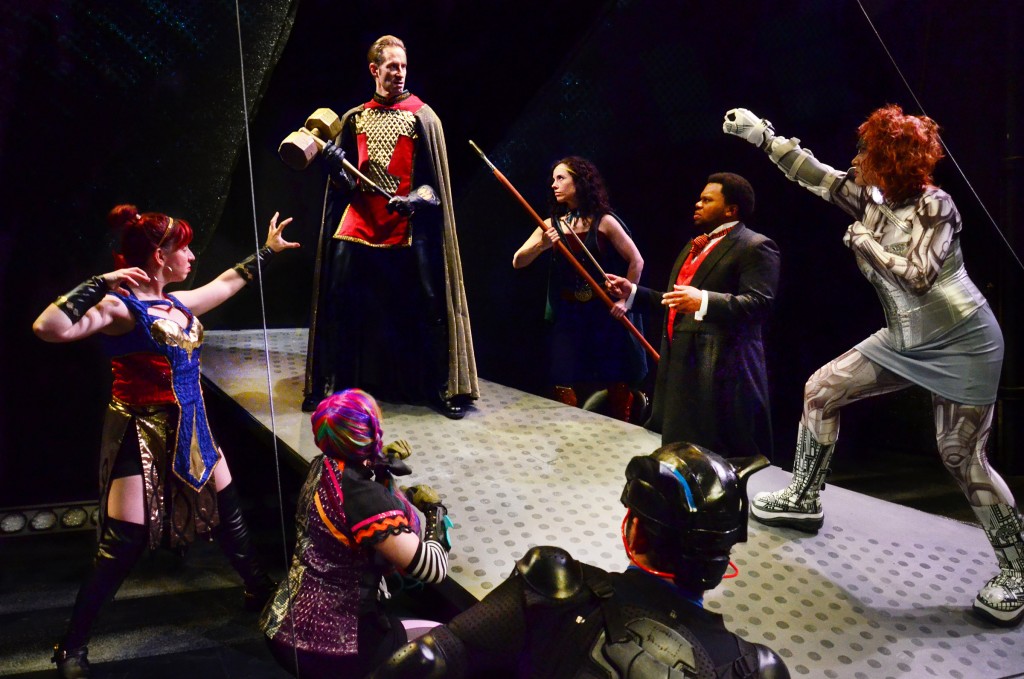 On paper, superheroes and stage musicals would seem like a natural fit. Both stories feature larger-than-life characters, bright shiny action and, more often than not, a syrupy core of sincerity. However the two most high profile superhero musicals to date, “It’s A Bird…It’s a Plane…It’s Superman” and Julie Taymor’s “Spider-Man: Turn Off The Dark” were both kludgy, ill-begotten flops. Unfortunately, Lifeline Theatre’s “Soon I Will Be Invincible” falls into this same category.

Adapted by Christopher M. Walsh from Austin Grossman’s 2007 novel of the same name, with music by Christopher Kriz, “Soon I Will Be Invincible” follows twin narrators Fatale (Christina Hall) and Dr. Impossible (Phil Timberlake). Fatale, an amnesiac cyborg, is the newest member of the New Champions, a team of earth’s mightiest heroes. Dr. Impossible, meanwhile, is their greatest foe. When Superman analogue CoreFire (Jason Kellerman) vanishes, Dr. Impossible breaks out of prison and launches a new plan for world domination. The New Champions, who have some secrets of their own, rush to stop him.

The characters here are neurotic, self-aware. Dr. Impossible admits that his flowing golden cape is a touch of “pure drama.” Fatale worries about her lack of an interesting origin story. Walsh’s script clearly wants to tweak superhero tropes as much as it wants to indulge in them, but Kriz’s music is not ironic in the slightest. It is eighties-style big-hearted cheese. As a result, the show often feels like it’s doing battle against itself. Kriz’s music is also at many times clunky and awkward and, on the whole, unmemorable.

That could also describe the staging of director Paul S. Holmquist who seems defeated by the story’s scope. The action scenes feel like aerobics videos, with characters kicking and punching at the air with the villain conveniently beyond the fourth wall.

The show’s best, most satisfying moments are the ones spent in the company of Dr. Impossible, who Timberlake embodies with the ideal mixture of grandiloquence, sympathy and all-out nerd rage. Between Dr. Impossible and “Dr Horrible’s Sing Along Blog” it seems that maybe supervillains and musicals are the better pairing. (Alex Huntsberger)