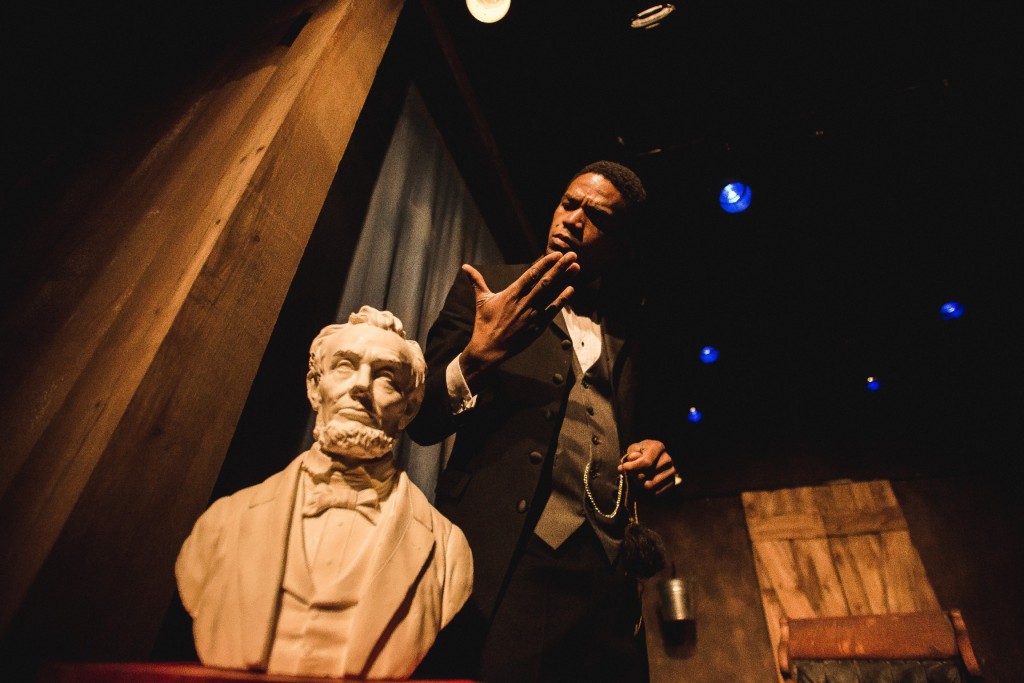 “The America Play” presented by Oracle Theatre is not for the faint of heart. Actually, scratch heart and insert the word mind. Playwright Suzan-Lori Parks demands of her audience what very few things, especially in an age of social media where news delivered in 140 characters is sufficient, demand: put our minds to use.

In fact, we almost use them to the point of mental exhaustion, as we scurry like mice in a maze trying during and after this non-linear, mind-boggling, eighty-minute drama, to get to the cheese, or in this case, the meaning of the play. But her point is to leave us confused (or at least to leave the interpretation up for grabs), to mimic what she grapples with in this play: history.

History often leaves us confused, with a multitude of interpretations and gaping holes, promising that if we dig hard enough we might be able to find clues to those—such as the protagonist in this play—that are often left out of history.

The Foundling Father (Travis Delgado), originally a gravedigger, has been repeatedly told that he bears a striking resemblance to Abraham Lincoln, although he is African American. Moved by this, he leaves his wife Lucy (Jessica Dean Turner), his son Brazil (Tony Santiago) and his profession behind to live out the rest of his life in a box impersonating Abraham Lincoln. There, various visitors (Havalah Grace and Rory Jobst) can pay a penny to reenact Lincoln’s assassination. In the second act we meet The Foundling Father’s wife and son at the old abandoned venue, where they search for signs of things he left behind.

Director Vanessa Stalling and her cast have not only tackled an extremely difficult work but conquered it. And the creative work on lighting (Eric Van Tassell), sound (Steve Labedz) and props (Emily Breyer) add much needed touches to this eerie theatrical experience.

Although it first premiered in 1994, “The America Play” has a freshness that leaves you partly befuddled, partly amused and thoroughly entertained. (Loy Webb)