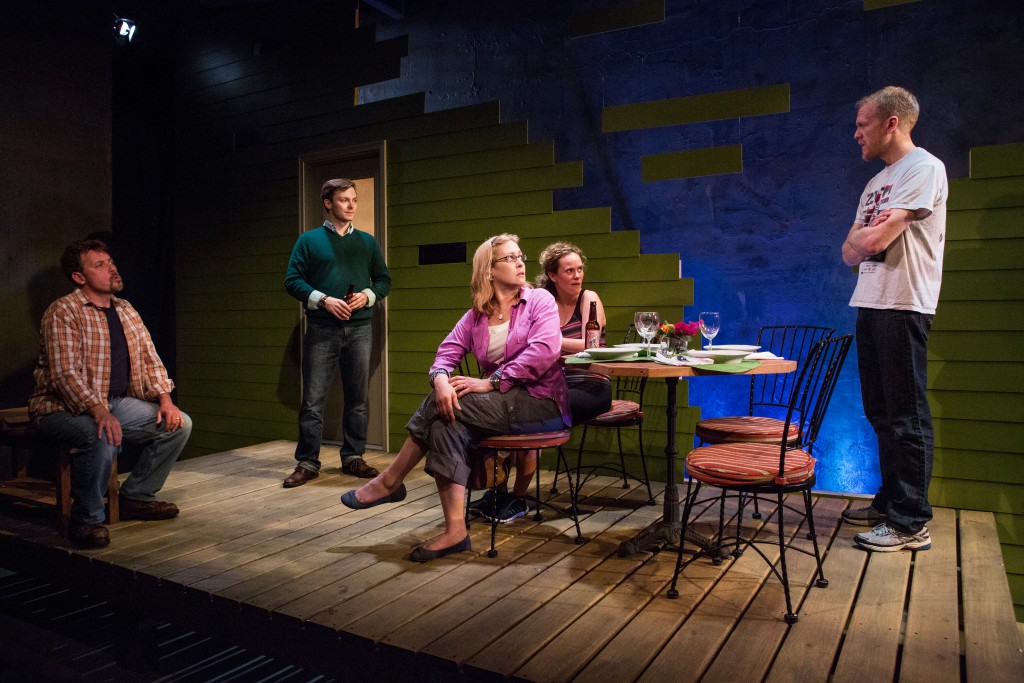 Priests are common characters in American storytelling but they are rarely ever protagonists. They often have a part to play, it’s just never in their own story. So it is refreshingly bracing when William Nedved’s “Body + Blood” gives audiences something rarely seen on the modern stage (or screen or Kindle, for that matter): a story about a man aspiring to become a priest that a) takes his faith in God seriously, b) has nothing to do with child abuse and c) allows this man to be a complete and total screw-up.

Directed by Marti Lyons in a world-premiere production at The Gift Theatre, “Body + Blood” begins with the first of many poor, or at least poorly timed, decisions made by Dan (Nicholas Harazin) in pursuit of priesthood. On a warm summer evening on the porch of the Chicago apartment that he shares with his girlfriend Leah (Cyd Blakewell), Dan informs her that he plans on joining the priesthood. This, of course, also means that the two of them are done. Since she was expecting a marriage proposal, Leah doesn’t take the news all that well. And when Dan’s big sister Monica (Lynda Newton) arrives with her lovable lug of a husband Mick (Stephen Spencer) she laughs him right out of the building. Too her, this is simply another example of Dan running away from commitment. Even Dan’s spiritual advisor Father Alex (Gabriel Franken) starts to have some serious questions as to what is really motivating this decision.

The play begins with a nervous comedic energy that the cast and the direction somewhat oversell. But as the play moves on from that initial evening and traces the fallout from Dan’s decision, the production gains steam. Dan’s myriad flaws threaten to take on a tragic dimension as Leah’s broken heart and his sister’s questioning of her own faith weigh heavier and heavier upon his shoulders. And though the play eventually arcs away from tragedy, it never forgets its humanity. Dan never stops being a loose cannon, but by evening’s end it looks like at least the muzzle is pointed in the right direction. (Alex Huntsberger)