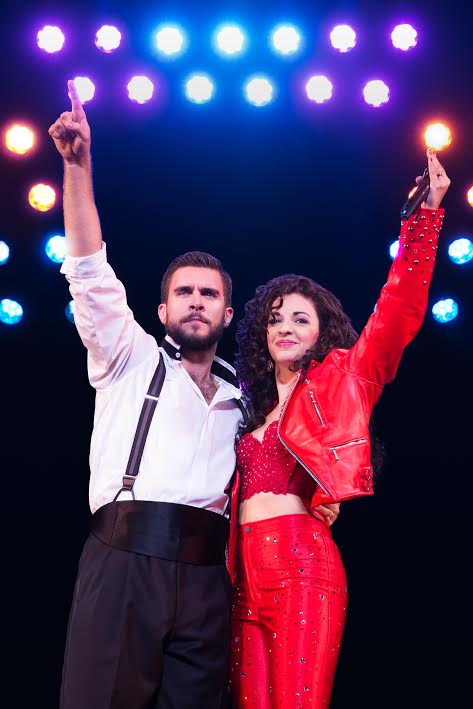 Seven Grammys. Over 100 million albums sold worldwide. A true-life story that so many can relate to in its triumph and tragedy. That’s the life of Emilio and Gloria Estefan and their incredible rise to fame, brilliantly captured in “On Your Feet! The Story of Emilio & Gloria Estefan,” now in its pre-Broadway world premiere here in Chicago.

From stunning costumes (designed by Emilio Sosa—who also did the costumes for “Motown: The Musical”), gorgeous sets, a phenomenal cast, a solid book and, of course, some really great music, this show is absolutely worthy of a Broadway stage.

The show begins as a show like this should—making the audience feel like they are at a concert. A full band is live on stage, colorful lights fill the room and, if you’re sitting close to the stage, you feel the beat of the drums in your chest as the hit “Rhythm Is Gonna Get You” begins to play.

Ana Villafañe not only has Gloria Estefan’s look, but she sounds similar to her as well. And Josh Segarra is wonderful as Emilio—charming, suave and strong in exactly the right moments. The youngest members of the cast, Alexandria Suarez (Little Gloria) and Eduardo Hernandez (Nayib/Little Emilio), are rising stars—a joy to watch and total show-stealers in the best possible ways whenever they are present. The ensemble is stellar as well. Each member is on point executing the stirring choreography and music.

Gloria and Emilio Estefan, their work with the Miami Sound Machine and what they went through early in their career—fighting to be cross-over artists in a time when no one else was—changed music as it is currently known. To accomplish all of that from humble beginnings, and to accomplish even more after a serious and life-changing event like the Estefan’s horrific bus accident in 1990—an accident that could have ended their careers—is not only inspiring, but it’s at the root of the often illusive American Dream. This show is about a diva and her loves, a diva everyone can all hope to be like and loves that can inspire anyone to reach a little higher. (Mary Kroeck)