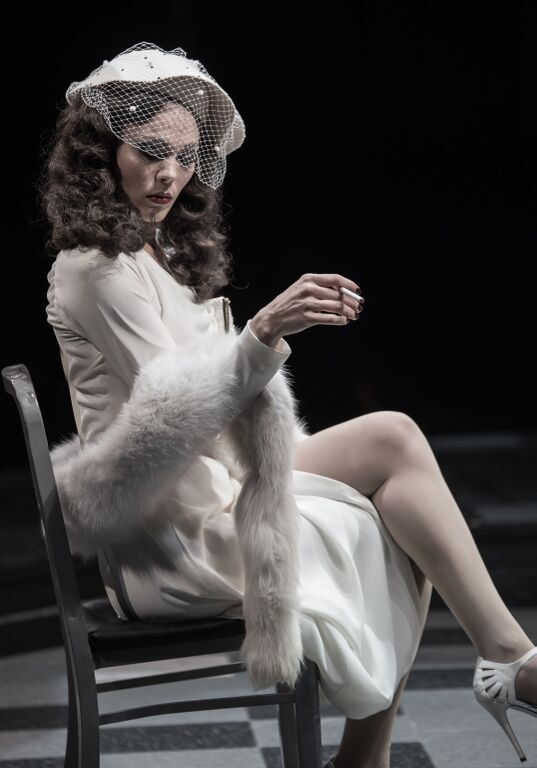 I thought a show where the colorful people stayed on one side of the stage while the colorless people stayed on the other, plot lines fizzled, and the leading players were a screenwriter and his alter ego but all the best tunes were given to three-and-a-half women was up against too many challenges. I didn’t see how it would have a life after Broadway. How to stage it? How to salve the wounded book? Eleven 1990 Tony nominations and six wins argued.

Marriott’s new production gave me comeuppance. As staged in-the-round by director Nick Bowling, a world of reality and another of cinema exist so closely and interchangeably that scene changes fly by, characters with counterparts in another world can be believably portrayed by one actor with the switch of a wig or a tablecloth, and these worlds can collide with élan. Thomas M. Ryan’s set, Jesse Klug’s lighting and Nancy Missimi’s costumes are beautifully to blame.

Rod Thomas’ scribe and Kevin Earley’s detective-counterpart are fully-fleshed; both performers possess great vocal chops, deserving of better material. Conversely, the ladies chew the scenery with a gusto fueled by terrific tunes. Danni Smith tears up the scorned wife/torch singer so we almost forget her character arcs are as limp as her voice is limpid. As the secretarial duo, Meghan Murphy’s smoky alto and deadpan line delivery recall Roz Russell on a tear, and Summer Naomi Smart’s femme fatales, creatures of everlasting legs, smoldering cigarettes and murderous lies, will make you forget she was ever a Mary Poppins.

Still a flawed piece of 1920s whimsy, Marriott offers a definitive production, filled with the finest-fitted singer-actors; the compositional disconnects blur as the saxophone and satin teddies seduce. (Aaron Hunt)