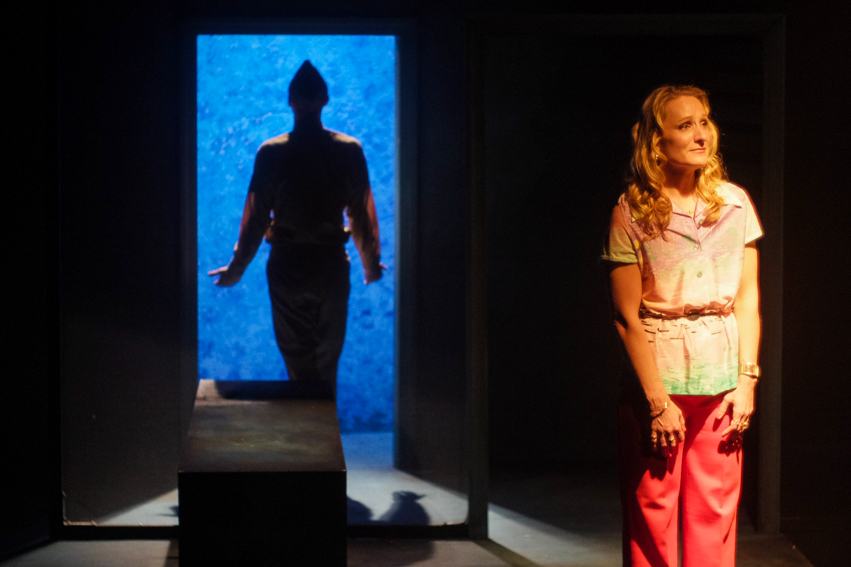 There could be many reasons to entitle a play “A Work of Art, ” but by doing so the author is either telling you that the play is about a piece of art, whether real or figurative, or the author has the hubris to declare their own work to be something significant and affecting. As there isn’t a piece of physical art seen or even mentioned within the text of Elaine Romero’s new opus, it is easy to infer that the playwright has made some gross assumptions about her piece.

Perhaps Romero intends the character of Sabrina (Jennifer Coombs) to be seen as tragically damaged in some beautiful way that would make her a living work of art. That would justify the title. However, what we get is a tale of a woman who has difficulty in dealing with the death of her brother, told in a disjointed manner that is difficult to follow and populated by individuals who are difficult to empathize with. This isn’t compelling art. It is what happens when the stream-of-consciousness path of ideation involved in playwriting is put down on paper verbatim. It is a mess, and not a beautiful one.

It is 1978 and Sabrina is still distraught ten years after her brother Kirk (Vic Kuligoski) died in Vietnam. Her mental anguish has led her to create alternate realities wherein she can visit her sibling constantly. Current reality and imagined pasts collide onstage over and over. Sabrina mentions that she doesn’t believe in “time.” This repeated reference serves as the forced justification for the play’s structure.

Regina Garcia’s scenic design, paired with Mike Durst’s lights, create a surreal venue for Sabrina’s stumbling, ranting existence. The resulting landscape is an effective surrogate for the confusingly structured mind of a woman who isn’t directly connected with the world around her anymore.

Were I able to care about Sabrina’s journey, or even to identify the journey itself, then I may agree that this is a work of art. As it currently stands, this show is more a rough sketch than a masterpiece. (Christopher Kidder-Mostrom)

The work of art in question is obviously the work of assembling memories. The play clearly makes the act of remembering to be, you know, similar to a work of art. Hence the heavy design and “stream of consciousness”. I find it hard to believe that any writer would be pretentious enough to deem their own work Art with a capital A. That, coupled with the actual content of the play, makes me think you’ve missed the point.