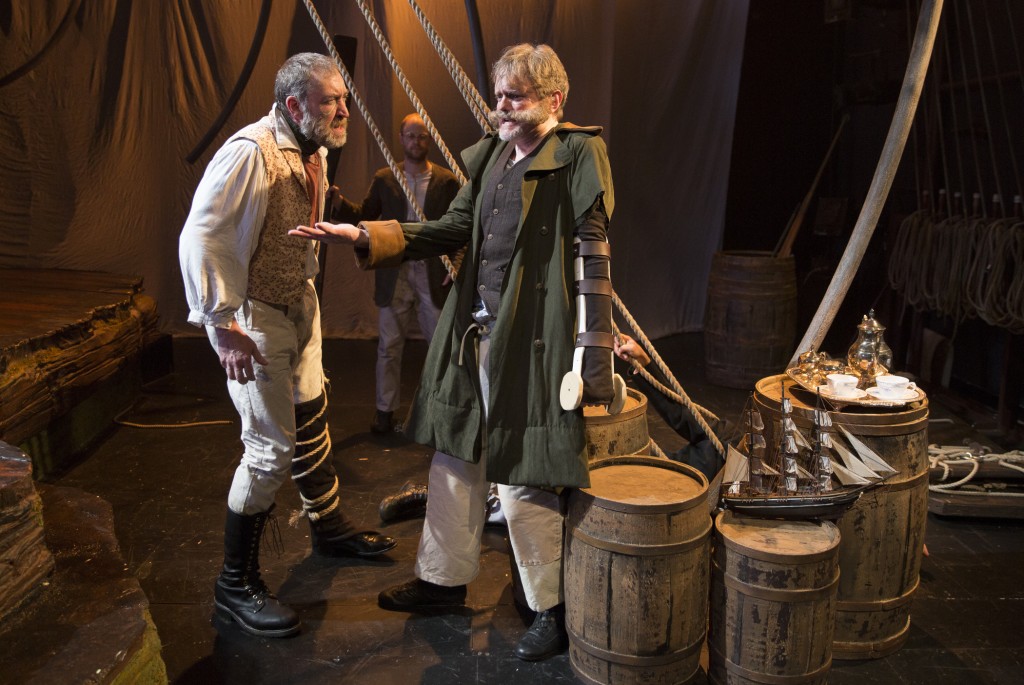 “Moby Dick” is the leviathan of American literature, diving deeper than any other work into the mysteries of human nature and destiny. Shakespearean in scope, biblical in flavor, Herman Melville’s nineteenth-century novel most memorably gave us the one-legged, lightning-scarred figure of Captain Ahab, whose mad quest for the white whale that “dismasted” him turns the voyage of the Pequod into a Jim Jones-style death cult.

Director-adapter David Catlin, fresh from his spectacular “Lookingglass Alice,” shows he is as comfortable with the sublime as the whimsical, crafting a gripping version of the novel that captures both its epic scale and sharp characterizations. In association with The Actors Gymnasium, Catlin and company have created a kinetic, circus-like theater space that engulfs the audience and makes Melville’s watery world come alive. Set, lighting and sound designers Courtney O’Neill, William C. Kirkham and Rick Sims deserve an ovation for their depiction of the sea’s moods, from tropical languor to typhoons that mirror Ahab’s inner turmoil.

Christopher Donahue is solid as Ahab, that “grand ungodly godlike man,” but lacks some of the original’s poetry and monumentality, and Kareem Bandealy as Starbuck hangs back in his life-or-death conflict with the captain he hates, fears, pities and ultimately obeys. Jamie Abelson is on target as Ishmael, who signs on to see the world and gets more than he bargained for. But it is Anthony Fleming III who really shines as Queequeg, the tattooed, harpoon-wielding “pagan” who is the work’s moral center. Fleming’s combination of strength, agility, grace and presence is nothing short of remarkable.

The show isn’t without issues. Accents waver, the billowing fabric “waves” are getting old, and the final confrontation between Ahab and Moby Dick leaves too little to the imagination. Melville’s Moby Dick is beyond comprehension, marking the boundary of human intellect and power. Catlin’s whale is demonic, a misinterpretation of its neutral whiteness, which reflects back Ahab’s demented—and very American—desire to defeat evil and save the world through violence.

Catlin and his gifted cast have wrought something tantalizingly close to a masterpiece. With a touch more dramatic buildup and a revised ending, this “Moby Dick” could become a staple, conveying Melville’s prophetic insights about authority and hubris to a world that needs to hear them. (Hugh Iglarsh)