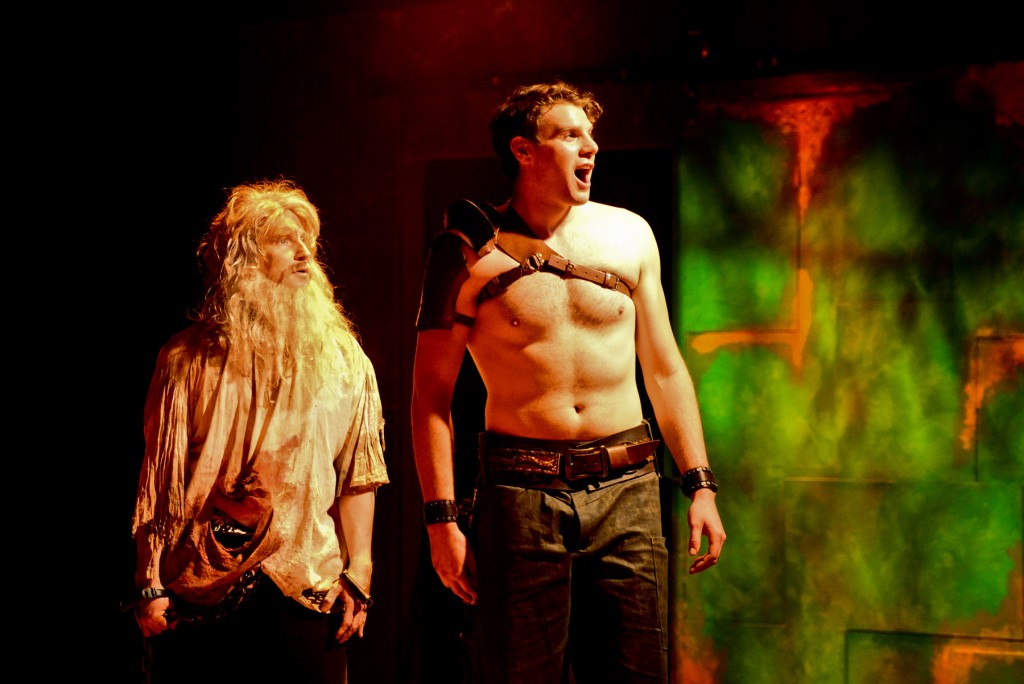 One might think that Sean Graney’s title for his play/adaptation/mashup/opus “All Our Tragic” is a bit of playful hyperbole. But nope. It’s all in there. From Prometheus on the rock to Herakles butchering his children to Oedipus and Troy and Orestes’ revenge on Klytaimnestra, “All Our Tragic” is an entire survey course in Greek tragedy crammed into a single twelve-hour play.

Oh yes, about that. It’s twelve hours long. And it is definitely worth it.

Adapted by Graney from all thirty-two surviving Greek tragedies, “All Our Tragic” is as liberal with its source material as it is with its blood effects. It isn’t necessarily meant to be an “accurate” adaptation of the classic tragedies—which were themselves a remixing of mythology, history and commentary. It treats the plays like raw ores that Graney melts down to then forge into something bigger, grander and truly epic.

And as much as the play is a never-ending parade of death and misery and woe, it is also shot through with irreverence. The play isn’t only alive, it is also keenly self-aware. And that’s good, because Greek tragedy is weird, man. Dragons and spear brides and witches, and… . But by allowing the play to laugh at itself, Graney pre-empts our own ironic detachment. We are allowed to laugh with the play, rather than at it. And then we cry with it too.

The play is broken into four sections: Prehistorics, Politics, Patriotics and Poetics. Prehistorics covers the age of the epic heroes like Prometheus, Herakles, Jason and Theseus; Politics concerns itself with the Theban tragedies, with Oedipus’ short but horrifyingly eventful reign serving as the act’s gooey, incesty center; Patriotics is, in short, the Trojan War; and Poetics focuses on Agamemnon and the house of Atreus.

The uniting plot point is seven sisters doomed in the play’s first hour to marry seven cyclops brothers but who, with the aid of Herakles (Walter Briggs), murder them instead. The cyclops’ father Eurystheus (Maximillian Lapine) curses the sisters so that they shall die violently in the order in which they were born. The sisters are Glauke (Tien Doman), Asterope (Erin Barlow), Alcestis (Lindsay Gavel), Creusa (Dana Omar), Thiba (Emily Casey), Klytaimnestra (Doman, again) and Helen (Casey). Glauke, the oldest, soon thereafter becomes betrothed to the dashingly douchey Jason (Breon Arzell) and dies quickly at the hands of Jason’s gothy ex, Medee (Omar). Other sisters, like Thiba, live much longer than that, but see enough death and destruction and pain to make a short life seem like a blessing. 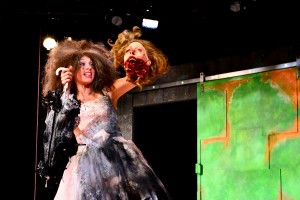 The cast all play multiple roles with the exception of Ann Delaney, Lauren Vogel and Kate Carson-Groner who play the Odd Job girls, “All Our Tragic”’s chipper musical chorus. (The role of Odd-Job Alice, played by Delaney, was played by Erin Myers in the original production last summer. Sadly, Myers died this May after a long struggle with colon cancer. Many of the cast bios contain touching dedications to her.) Briggs shows great range as Herakles, a bro-child aptly described as “like a really smart dog” and Agamemnon, a macho general who becomes the Trojan War’s de-facto villain. Zeke Sulkes is a near-constant presence throughout the show, playing the goat-legged, Oedipus’ put-upon brother-in-law Kreon and Neoptolemus, son of Achilles. Ryan Bourque is hilarious as Menelaus, all beta-male huffing and puffing, as is John Taflan as Pylades, the creepy friend of Orestes (Geoff Button). Taflan also plays Patroklus, husband to Achilles (Arzell) and one half of the play’s most functional couple, while Button memorably draws Eteokles, son of Oedipus, as a delightful cross between Napoleon and Wallace Shawn. Danny Goodman’s Philoktetes is another constant; a walking, talking pillar of moral thought who journeys with Herakles and lives long enough to see Troy burn.

Doman’s characters all exhibit an appropriate strain of womanly disbelief at the wrongs of men, culminating in Klytaimnestra’s bloody jag over the murder of her daughter, Iphigenia, who Gavel endows with a radiance that makes her loss the play’s most memorable one. Christine Stulik plays both a pretentious, entitled Jokasta—her death actually seems no great loss—as well as Kassandra, Troy’s lone, if somewhat looney, voice of reason. One wishes she would just off Helen, who Casey joyfully imbues with all the charm and self-regard of a z-list reality star; that thousands die on her behalf is only fitting.

Many of those deaths come courtesy of Bourque, pulling double duty as fight choreographer. The set, by Tom Burch, starts out looking like a swimming pool but ends up more like an abattoir. And yet, in its final moments, “All Our Tragic” turns away from death and embraces life. It celebrates the messy, awful, angry, passionate, broken people who all loved something they had no business loving. Like any good Greek tragedy, it achieves catharsis. (Alex Huntsberger)