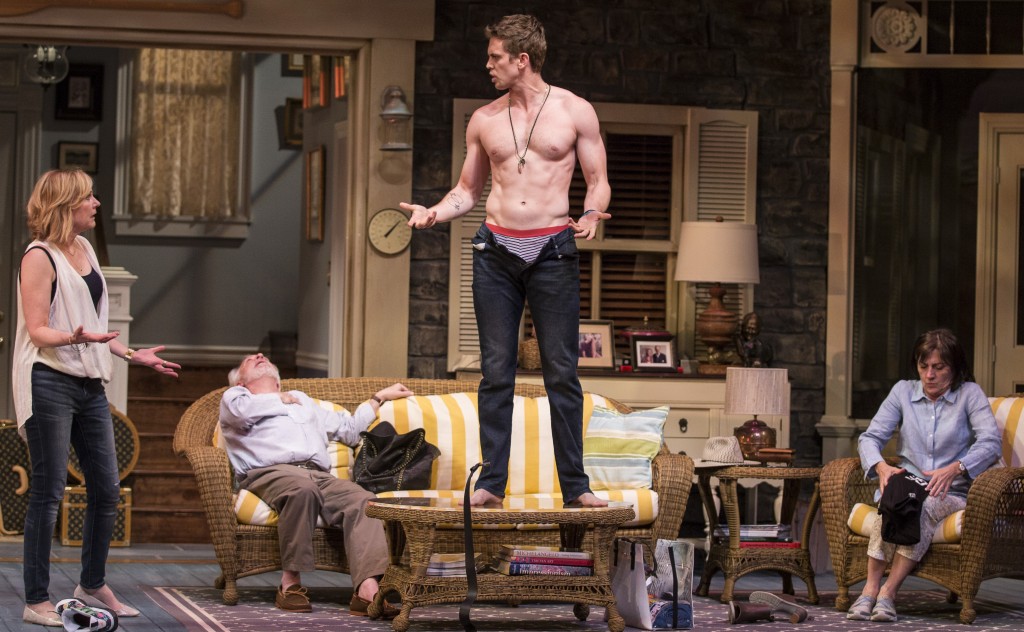 The opening moments of “Vanya and Sonia and Masha and Spike” are pure Chekhov. A brother and sister sit in their country home staring at a pond, hoping to see a blue heron and marinating in their regrets. Then the sister propositions her (adopted) brother, their Jamaican housekeeper shows up shouting disturbing prophecies and pretty soon a half-naked movie actor is dancing around for all to see. That’s when you remember that this isn’t Chekhov. This is Christopher Durang doing Chekhov. Instead of “I’m a seagull,” it’s “I’m a wild turkey.”

Directed by Steve Scott, the Goodman’s production features Goodman mainstay Mary Beth Fisher as Masha, a bitterly aging movie starlet who has returned home to inform her much more withdrawn siblings, Vanya (Ross Lehman) and Sonia (Janet Ulrich Brooks), that she is selling the family home in which the pair currently reside. Masha’s much-younger boyfriend Spike (Jordan Brown) is also in tow. He’s an up-and-coming actor but already a master idiot. Masha feels threatened by Spike’s attraction to Nina (Rebecca Buller), the neighbor girl who is herself an aspiring actress. Sonia and Vanya feel threatened by pretty much everything. The housekeeper, Cassandra, takes after her namesake and practices voodoo; if it weren’t for the utter commitment of actress E. Faye Butler, the character would feel just as problematic as she actually is.

Fisher’s Masha is equal parts elegance, pretension and blinding fear. She is funny and sympathetic while still being quite cruel. Ulrich Brooks meanwhile channels all of Masha’s constant anxiety into delightful slapstick while Lehman underplays Vanya to great effect. The three are hilarious, sad, and oftentimes hilariously sad.

While the play’s plot is, clearly, a Chekhovian melange, it is very much a Durang play: Vanya’s climatic meltdown here involves long digressions on Ozzie and Harriet, stamp-licking and “Old Yeller” star Tommy Kirk. But all these Baby-Boomerisms do serve a point. Durang has taken the vast social changes sweeping Russia in Chekhov’s time and substituted in his own frettings about technology, climate change and the death of the monoculture. The result is a play that is specific in its references, but universal in its neuroses. (Alex Huntsberger)