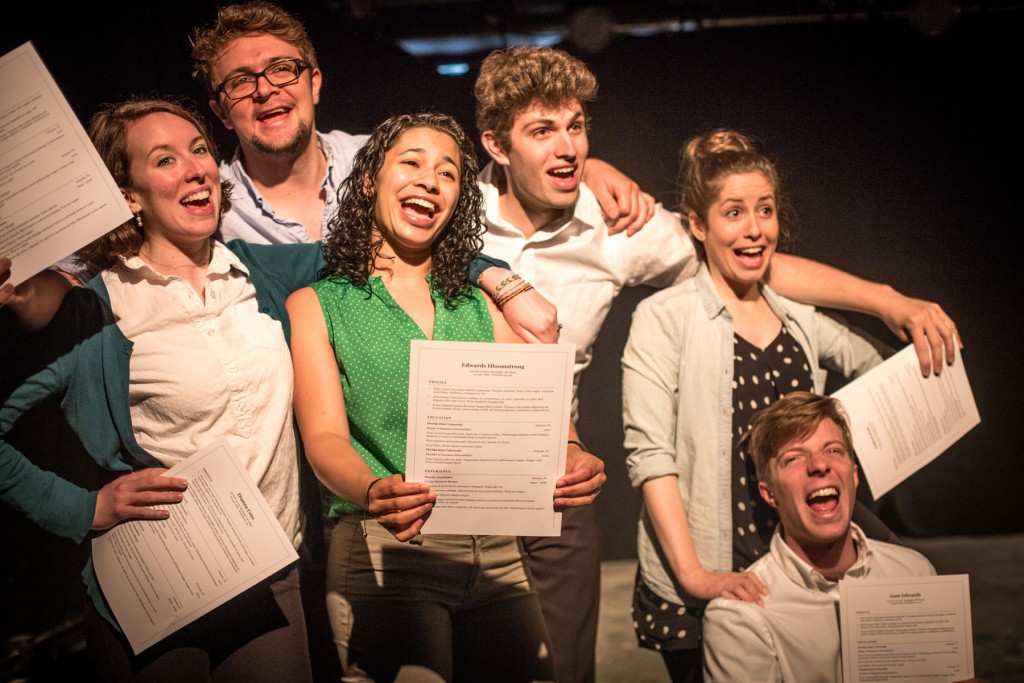 How To Run For Mayor

The Chicago Musical Theatre Festival provides an important birthing-space for Chicago-connected, nascent musical theater to access our city’s storefront-ethos, where new plays are frequently produced and honed. Despite the temptation to praise the sheer effort of the production team, adding music to words, vice-versa, or in combination, and of the performers to stretch themselves by quickly learning new material, and reworking it in a workshop situation, it is incumbent upon the reviewer to present a significant opinion of the offerings and their champions, in service to all involved. In the case of “How To Run For Mayor,” playwright Gilbert Tanner and composer/lyricist Aaron Aptaker (who also directs) enjoy this opportunity.

A one-act play, despite its expectedly quick-moving structure, nevertheless requires a plot that begins with a premise, presents a conflict and concludes. “How To Run For Mayor” has, in its growth, yet to answer those qualifications. Seeming to rely heavily on the structure of sketch comedy, and borrowing unfortunately from the surprises of Theatre of the Absurd, the piece introduces the characters unwisely, produces a conflict of character-conscience, and attempts to resolve itself by stomping through a pool of self-pity, with the slightest and most obvious lesson.

Trent Eisfeller gives a compelling portrait of a handsome and quite insane incumbent mayor, with really terrific hair. The creators introduce this character, the antagonist, first, which isn’t the strongest choice, as the story seems to begin with the protagonist’s entrance. Eisfeller is left to set the tone with a bizarre monologue, where exposition might better serve. Eisfeller’s pretty, lyrical voice is taxed by the histrionic screaming as written and/or directed, perhaps funny at first, falling flat before the finale.

Grace Palmer’s accidental protagonist, who finds herself running a hopeless mayoral race, is played with great heart; theatrically and emotionally, Palmer is exactly right for the role. Unfortunately, Palmer’s naturally attractive voice lacks the vocal training to answer even the trivial qualification asked of her by Aptaker’s octave-chord-chord, childish score.

“How to Run For Mayor,” in its current incarnation, is a lightly constructed series of skits, not a one-act musical. (Aaron Hunt) 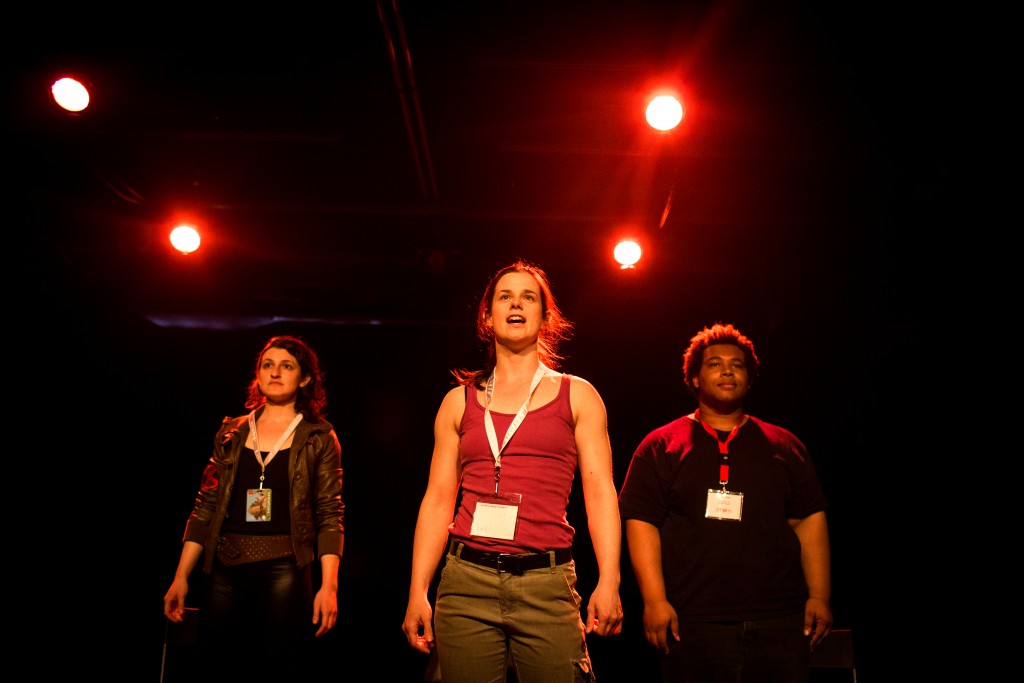 Far and away the best of the three festival pieces I had a chance to observe, “Fanatical” had the advantage of support from another theater company. With a book by Reina Hardy and music and lyrics by Matt Board, the “Fan” portion of the title refers to the sci-fi/comic-book geeks flocking to a convention where the keynote speaker is the writer of a favorite television show.

Director Kate Staiger’s well-cast ensemble members throw themselves at the material with total commitment. Kat Evans may be physically and vocally unlikely as the stereotypically drawn, driven dyke, and maybe that is part of the magic she weaves, with her petite figure and sparkly soprano voice. Stephen Garrett beautifully understates the male romantic interest, and Rory Leahy appropriately buffaloes his way through the writer’s character arc. Charlotte Ostrow holds the storyline together with her beautifully sung portrait of an open-hearted fan on a journey to wholeness, rather than compartmentalization.

Still needed is a more solid way into the musical for the uninitiated. The piece could be made more universal with an expositional musical number that would more fully explain the world of the sci-fi geek. The discovery toward the end of the piece of the bifurcated lives led by these characters isn’t a useful surprise; this insight would have greatly served at the top of the show.

It is almost impossible to write music and lyrics for the American musical without composing something that can be accused of being derivative. Americans created the art form and have, perhaps, expanded it as far as we can at this time, without extensive revisionism. Board does a terrific job of creating music and lyrics where the numbers feel related to each other, of a single piece, yet freshly change from one-to-another in form, meter and harmonic structure. However, toward the end of the show, Board veers off into Stephen Schwartz-land, with predictably constructed ballads; he is better than that, and needs to revisit this departure from his effusive style. If we heard a number that sounds like Sondheim, followed by a number that feels like Jerry Herman is in the house, this is the fault of the medium’s progression, and not of fledgling composer/lyricists.

“Fanatical” needs more workshopping, but it is well on its way toward a quirky, off-Broadway type of show. (Aaron Hunt) 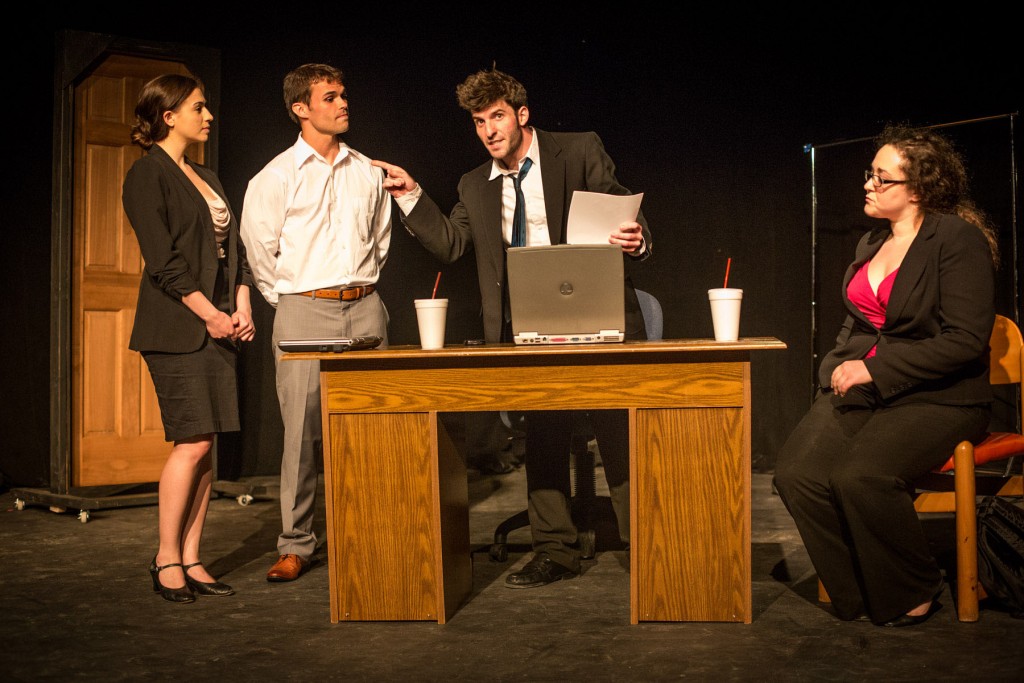 Underscore chose “American Smoothie” as one of the two pieces to include in their mentorship program. I find this surprising, as this play is the least likely to be transportable to an independent production of the three pieces I have seen.

Nick Jester’s book and lyrics create a situation, not a play; there is nothing new about a story of a mistreated, runt-of-the-litter office worker. The characters are predictable, and we spend altogether too much time in their office test-tube, in vitro, hoping for fertilization. David von Kampen’s unsophisticated score proves impotent.

Brian Elliot plays the beleaguered, unappreciated IT technician; the writing of his character is a flaccid reworking of Finch, the protagonist in “How To Succeed In Business Without Really Trying.” Despite this obstacle, Elliot creates a lovable schlep of a discounted everyman. Endowed with an appealing singing voice, Elliot deserves better opportunities.

Michael Palmenderi’s boss is as gloriously over-the-top as the script insists upon, and Cami Rene Philgreen’s office manager is as off-puttingly enigmatic as director Emma Couling seems to request and condone. Katy Fattaleh, as the office bombshell-cum-CIA agent, searches for the keys to her musical numbers in vain. Jonathan Wilson’s pretty-boy marketing manager sings and dances beautifully and (thankfully) takes his shirt off twice for absolutely no apparent reason.

If the writers went back to the table, cut the character of Brian’s roommate, enlarged the part of John Grisham (played marvelously by an uncredited, constantly sunglassed actress), and built a solid thriller plot, seeded at the top of the show, there might be reason to begin anew. (Aaron Hunt)