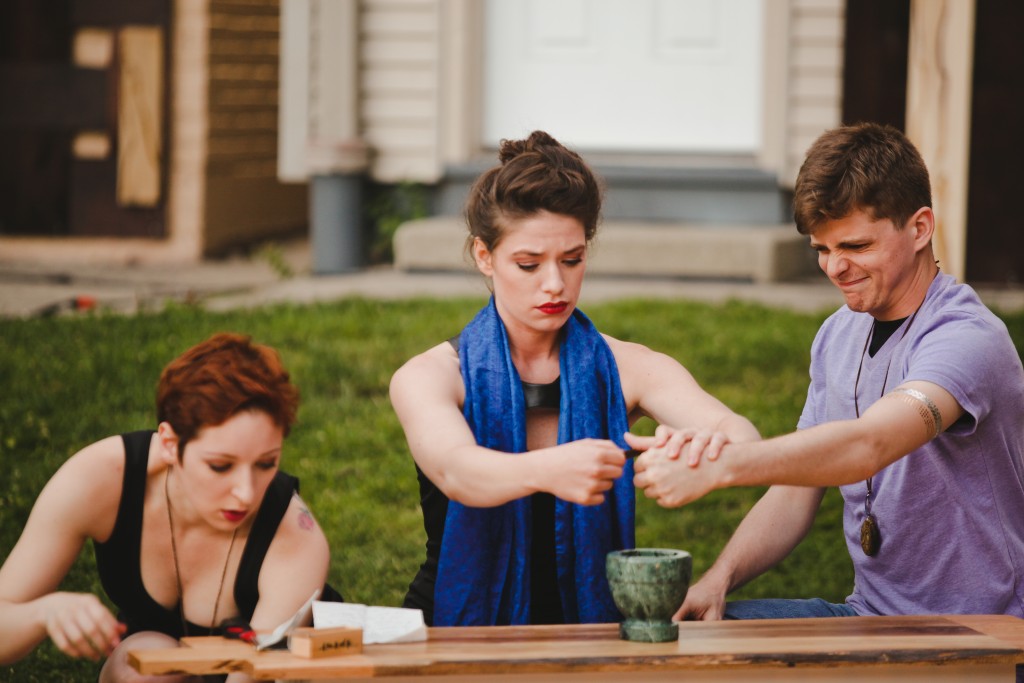 The show opens beautifully, with the witches translated into chic young hipsters who, perhaps having tired of yoga, are now into necromancy. They fuss about with rune stones and patchouli oil as the audience settles in, chatting quietly with each other, so that one doesn’t know the play has begun until it’s several minutes under way. The effect in the cozy outdoor setting is magical … until director Mark Boergers strides onto the bare stage and asks us to turn off our cell phones, thus killing the vibe deader than Banquo’s ghost. (Memo to directors: This sort of thing happens way too often.)

But the weird sisters—better, weird siblings, as winsome witches Chelsea David and Lana Smithner are joined by the appealingly gawky warlock Daniel Mozurkewich—recover from the faux pas. Their carefully staged encounter with Scottish lairds Macbeth (Joe Flynn) and Banquo (Andy Fleischer) is devilishly good theater. The spooky trio’s dramatic but equivocal pronouncements about Macbeth’s destiny fire his ambition while banking his conscience, setting the scene for murder and madness.

“Macbeth” is the sort of show one doesn’t expect on a summer evening in the park, and maybe that’s why it works so well. The specialty of the house is gore by the gallon, and the troupe has found the right vehicle for bloody spectacle. Banquo’s posthumous party-crashing is shockingly, uncampily nightmarish, as is Lady Macbeth’s (Natalie Sallee) mad scene, in which cleansing water turns, presto chango, into damning blood.

Overall, the youthful cast performs with clarity and vigor. Particularly worthy of note are David Meldman’s vengeance-charged Macduff and Lana Smithner’s Lady Macduff, who is the picture of wronged innocence, giving the play its tragic shading.

On the down side, the bard’s language is not always done full justice, especially by the leads, and the biker gang look proves once again that black leather and blank verse don’t mix. But these are quibbles. The Arc Theatre deserves applause for offering a free dose of Shakespeare at his fiercest and most bracing. His tale of the literally diabolical pursuit of total power is particularly relevant as the election season approaches, raising a question that never goes away: How can those who wish to be king be trusted to rule? (Hugh Iglarsh)