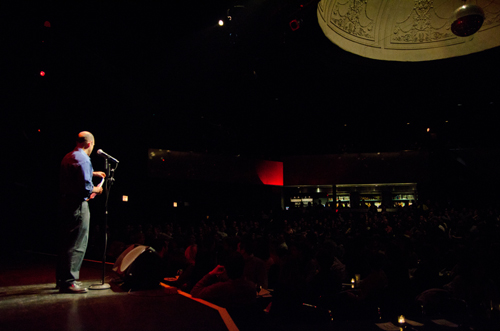 The Moth GrandSLAM 1: Into the Wild

Starting a show by making audacious promises to the audience—you will laugh, you will be amazed, etc.—is usually a misguided path to disaster. But host/MC Don Hall came off as more soothsayer than bloviator as The Moth Chicago GrandSLAM delivered on all accounts. The Moth storytelling series is a well-known mainstay to the Chicago area, with shows every couple weeks at Martyrs and Haymarket. The format is fairly simple: story tellers put their name in a hat, and those drawn get five minutes to tell a story compatible with that evening’s theme. But the GrandSLAM serves as a special event held a few times throughout the year, with the purpose of pitting ten Moth winners against each other for the grand prize of bragging rights. Three sets of judges—including a group of former Moth GrandSLAM winners, members from local LGBTQ storytellers OUTspoken and a randomly selected crew of audience members—scored each story on unspecified criteria. The theme was “Mea Culpa.”

As a whole, these stories delivered, which is remarkable when you think about how many bad stories you’ve heard in your life. The stories aren’t written down and the performers aren’t aided by notes; it’s just a microphone and a memory. Some memories are hilarious, like Archy Jamjun’s impression of his mother’s explanation of the problem with American cats. Some memories serve as homage to past demons, like Moran Cerf’s attempt to understand square roots. And some, like Nestor Gomez’ reveal of just how strong his daughter is, render the heart broken.

Other stories contained elements of love, loss, disability, culture shock and, of course, pyromania. The range of ideas and styles kept the entire night fresh, never dropping the pace. At the conclusion of each story, Hall would dig in a batch of audience-submitted confessions of occasions when “it was my fault” which bought the judges time to tally their scores and filled Park West with laughter. Creative and smart stalling.

Pay attention to when the next GrandSLAM takes place and buy tickets ahead of time. This is one of those quintessential Chicago experiences, an absolute must. (Logan West)