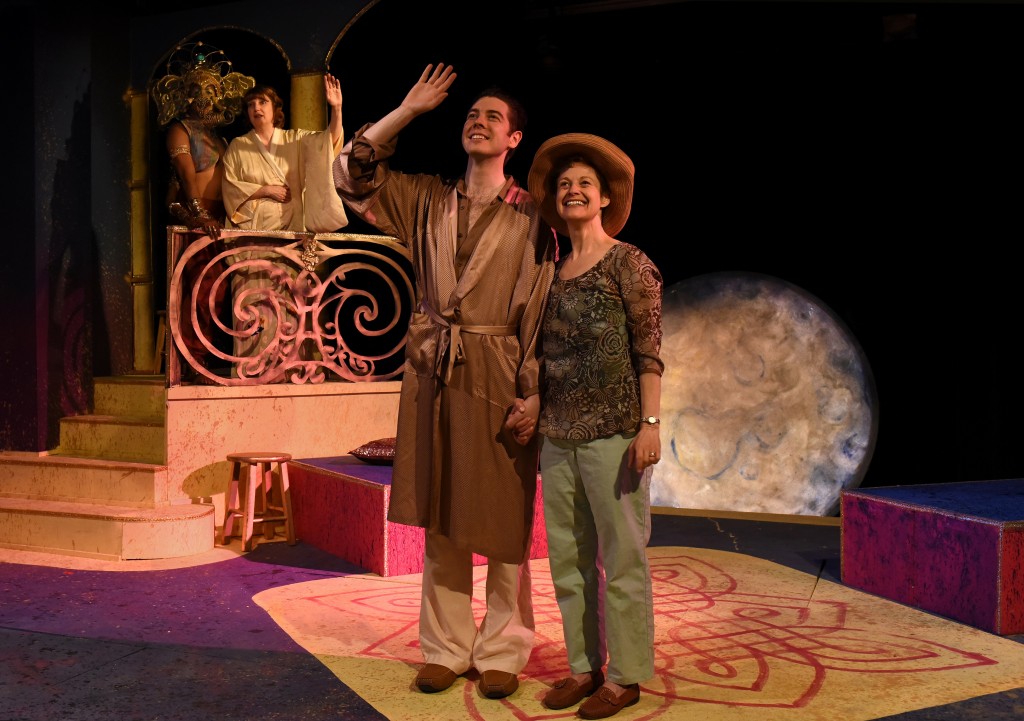 Rarely in my experience has a play that starts so well gone so flat by the end. The opening scenes of “A Perfect Ganesh” are perfectly hilarious, from the moment old friends Kitty (Jeannie Affelder) and Margaret (Elaine Carlson) arrive at the airport, ready to ditch their dull suburban lives for a two-week jaunt to India. They have a common, semi-concealed motive for the trip: to find healing in the land of the River Ganges for the pain and guilt each feels for a son who has died.

Terrence McNally’s formidable wit flies thick and fast in the exchanges between the bubblingly enthusiastic Kitty and phobically negative Margaret, two very different New England matrons with a Felix and Oscar chemistry. It helps that Affelder and Carlson are consummate pros, effortlessly conveying their characters’ mutual irritation and ennui.

On their flight to India, they encounter turbulence, foreshadowing the jolts awaiting them. But it’s the play and not the plane that crashes and burns, as it shifts from the initial satirical mode to a cloying, melodramatic sentimentality. McNally, who penned this 1993 play, spoils his well-meaning messages about acceptance, tolerance and understanding by delivering them in a smug, self-righteous manner.

Director Steven Fedoruk would need to shorten the script by a good forty-five minutes to maintain any momentum. As it stands, the play meanders for nearly three hours, with periodic pseudo-revelations taking the place of plot movement and character development. Failing to move things along is the narrator, the elephant-headed god Ganesha (a too-cute Michael Harris), who embodies the essence of India, which here seems to exist only as a salve for the wounded souls of privileged Western pilgrims.

The numerous Indians (all played by either Harris or Phil Higgins, underscoring their interchangeability) are extras in the white characters’ psycho-dramas. And while the concept of Ganesha—the playful, benevolent Destroyer of Obstacles—as chorus is an interesting one, McNally’s execution is less than divine, failing to connect the shape-changing narrator to the key subplot, the death of Kitty’s son at the hands of gay-bashers.

But while many things happen in “A Perfect Ganesh,” nothing really connects, grows or changes. The fine leads deserve better than this passage to India turned sour, tedious guilt trip. (Hugh Iglarsh)