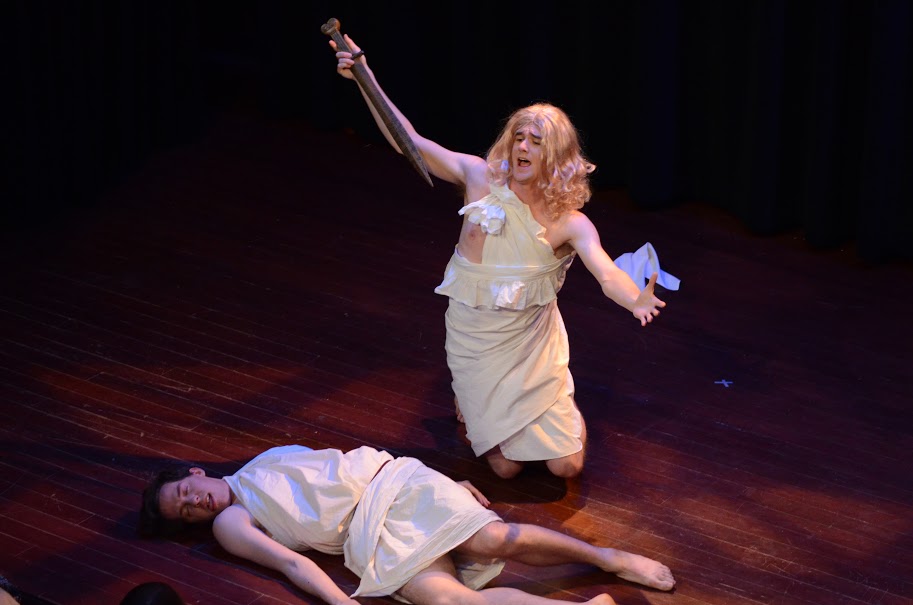 Chicago Summer Opera advertises itself as another of our city’s startup, storefront, non-profit operatic enterprises; its title promises a spoonful of gastronomical respite as Chicago’s opera gluttons starve their way through Chicago’s heat and humidity to the cooling, autumnal beginnings of the seasons of Lyric Opera of Chicago and Chicago Opera Theater. Its offerings must be considered in those terms.

Yet, a closer look at Chicago Summer Opera’s mission statement proves that it is primarily a training ground for young artists. In fact, Chicago Summer Opera’s singers are all “aspiring” opera singers, with no one among their ranks having made an “important” operatic debut, and further examination finds that, with the exception of some performers who may have been granted a scholarship, these young singers are paying tuition for classes in repertoire, acting, audition technique and diction. Each singer is promised a role in one performance of one of the company’s operas at the completion of their season’s tutelage. In the industry, this financial arrangement is called “pay for play,” and incurs all the potential positives and negatives implied.

As a part of these singers’ experience is public performance under the auspices of a nonprofit opera company, it is incumbent upon those in a position to make public commentary on their work to speak their minds fully, as it is incumbent upon these young singers to consider carefully the proffered instruction, keep what speaks to them and use it for further guidance, and throw the rest in the slop bucket. Thus endeth the disclaimer.

In their third summer, Chicago Summer Opera chose Puccini’s “Suor Angelica,” Gian-Carlo’s “The Medium,” and Benjamin Britten’s gorgeously complex, “A Midsummer Night’s Dream.” I had the pleasure of attending the final performance of “Midsummer,” which was the finale of their season, given at The Mayne Stage, in the Rogers Park neighborhood.

The Mayne Stage was constructed as a performance space for comics, bands and other un-operatic offerings, although Chicago’s Haymarket Opera, specializing in neglected Baroque operas which employ smaller casts, lighter orchestration, and perhaps necessitate less running and jumping than flying fairies and bumbling mechanicals might require, has used the space to great success. Mayne enjoys a toilet-bowl-shape, the balcony at the rim, row of banquettes in each of the next two levels toward the drain, and a flat area at the bottom where chairs can be moved to accommodate the needs of the performing artists. Director Rod Gomez answers the challenge of Mayne Stage’s petite, shallow playing space by taking over the entire theater as fair game, using little of the actual stage, and sparingly. What seems like a terrific idea, however, creates a challenge for the audience, some wallowing in buttock-contentment in Mayne’s banquette seating, happily guzzling drinks and mauling kale burgers, or the few perched at bar tables on the main floor, (they have their cocktails, too), seated directly behind music director Codrut Birsan’s orchestra (which is taking up almost half of the potential “orchestra seat”), precariously close to the percussion section that spills out of the central seating, taking out several banquettes in the process.

Gomez has blocked his singers on the ground floor, within smelling distance of the audience, walking about those banquettes at close enough range to steal a sweet-potato fry, and in the one-chair-deep upper balcony. There was nowhere in the hall where every scene could be viewed. (I grow pale when I imagine a tragedy played in this space while waitstaff walk within feet of the stage, delivering another round.)

Birsan’s orchestra is no doubt offering as fully a version of Britten’s orchestrations as possible. They tremolo’d and scraped and slid prettily, giving full rein to the colors that the composer has created for each group of players, (fairies, lovers, mechanicals and royals), accompanying Britten and Peter Pears’ adaptation of Shakespeare’s beloved comedy. Nevertheless, in such a small space, and with so little room at Gomez’s disposal, there is argument to be made for a less-effulgent orchestral experience.

Sadly for countertenor Patrick Terry, the opera opens with the feud between Oberon and Tytania. Normally hyper-sympathetic to the needs of singers, Britten scores this duet as if he had two fully lyric-coloraturas at his disposal, the vocal lines veer too closely, and expectation for balance is unrealistic; Terry’s vocal compatriot David Daniels couldn’t be heard during these pages at Chicago Lyric in the fall of 2010, either. Elsewhere, Terry made some warm, round sounds, although these clouded his words. Terry was the first of many who neglected to imbue his singing with sufficient diction. Shakespeare’s words, with music composed specifically for them, must be given full sway. Terry’s dramatic choice for Oberon seemed to be chilly distance, from everyone, and nothing more, insufficient for the playing.

Mizuho Takeshita proved herself less than collegial when her Tytania vocally obliterated her Oberon. She lost an opportunity to color phrases with multiple meanings and longings, rather than employing sheer volume. Diction would have been her friend. Takeshita is possessed of an outstanding instrument and solid technique. But Tytania is earth-mother, warrior-goddess, and to make loud sounds to the dissolution of this multifaceted creation is unacceptable.

Tytania’s fairies, Cobweb (Kateri Gormley), Mustard Seed (Ellen McMullin), Peaseblossom (Amber Monroe), and Moth (Samantha Farmilant), appeared comfortable in their bodies, executed their choreography well, and seem possessed of terrific voices. It was impossible to distinguish them, as they sing mostly in unison. This is because the roles were conceived for boy sopranos, and Britten’s vocal writing and orchestration echo this choice. With four adult women singing these roles, the effect is less choirboys and more Wagnerian Rhinemaidens. Regardless, all four must come in on the first beat of their entrances. At their decibel, an entrance by only two, with the second two jumping in when they have collected themselves, was readily discernible.

The casting of soprano Kristin Hagan in the speaking part of Puck is questionable. While Hagan enjoys an amiable stage presence and an attractive speaking voice, the casting of a classically trained male actor with a joyously free physicality might have done much to throw down an acting gauntlet for the company, not to mention the possibility of adding homoerotic tension between Puck and the Fairy King. Hagan also plays against the memory-residue of Esteban Andres Cruz’s 2010 unequivocal triumph in the role at Lyric. Hagan might have fared better had there been any space for her to race about for forty minutes, girdling the earth.

Britten poured out a throbbing lyricism for Shakespeare’s quartet of lovers, and Chicago Summer Opera’s foursome met that challenge with varying levels of success. Brian Fimoff’s (Lysander) attractive tenor is a good match for his physicality and stage presence; his entrance was particularly full-throated, and he possessed the best acting chops. Sean Sullivan (Demetrius) is good-looking, free in his body, and the baritone’s technique seems in place for his instrument to grow in size and color. Christine Roberts (Hermia), pushed her mezzo-soprano to the point of wobble at the beginning of the evening, and was frequently unheard thereafter. More attention to the words would have helped, and Roberts might explore one of several acting techniques that would help her release the body tension that might be inhibiting her singing. Roberts might also reexamine her choice to pursue a career in her current Fach. As Helena, Melody Joy Rubin made insufficient use of her character’s Shakespeare-given, wildly comedic opportunities. A greater attention to diction would have helped Rubin to color her text.

I posit that Britten loved the mechanicals the best, ladling their music with a bucolic, folky quality, and Shakespeare seems to dote on them as well, giving them both warm hearts and riotously funny spirits. Bass-baritone Timothy Madden essayed a terrific Bottom, both vocally and theatrically, and obtained the largest laughs of the evening by playing Bottom’s transformation into an ass for truth, rather than parody; I suspect his current voice classification will lose the “bass” qualifier ere long. William Ottow’s Flute (a role originally sung by Pears), spun a lovely lament as Thisbe, and Ottow added just the right amount of mince to the pie. Jack Cotaling (Quince), Joshua Poucher (Snug), Jonathon Joseph Larson (Snout), and Zico Shaker (Starveling) all acquitted themselves very well.

I have yet to appreciate the music Britten composed for Shakespeare’s royals, either in the study of the score or in the hearing. Jessica Gonzalez-Rodriguez (Hippolyta) and Yunpeng Jiang (Theseus) were saddled with the saggiest part of the evening, and triumphed against the odds. The fault lies somewhere between Benjamin and me, and is not that of these young singers, both strong of technique and elegant of presence.

And now I turn my critique from the mottled-success of an opera company to the wild flowering of a training ground for youthful singers. Moving away from commentary on the unfortunate acoustics of the space, Gomez gave his singers a theatrical experience which encased them within their audiences. If they were ever accustomed to a park-and-bark sort of stage etiquette, with their faces always forward and abusing their stage partners, they had no choice here but to open up, and engage each other particularly; what a wonderful lesson. If Birsan’s orchestra took up too much room, and created a greater challenge by expecting his young charges to carry over the instrumentation, the singers were given an opportunity to meet that expectation with professional-level technique, challenging themselves only against their own best efforts, and to create characters emblazoned by Britten’s vibrant, orchestral coloring. And Chicago Summer Opera has provided an opportunity for these aspiring opera singers to add a role to their resume in an opera that has entered the standard repertoire, which they could conceivably be called upon to sing in the future.

Finally, will Chicago Summer Opera be able to reconcile the perception of their standing as a full member of Chicago’s opera-producing community, with their play-for-pay status? We will watch with happy expectation.