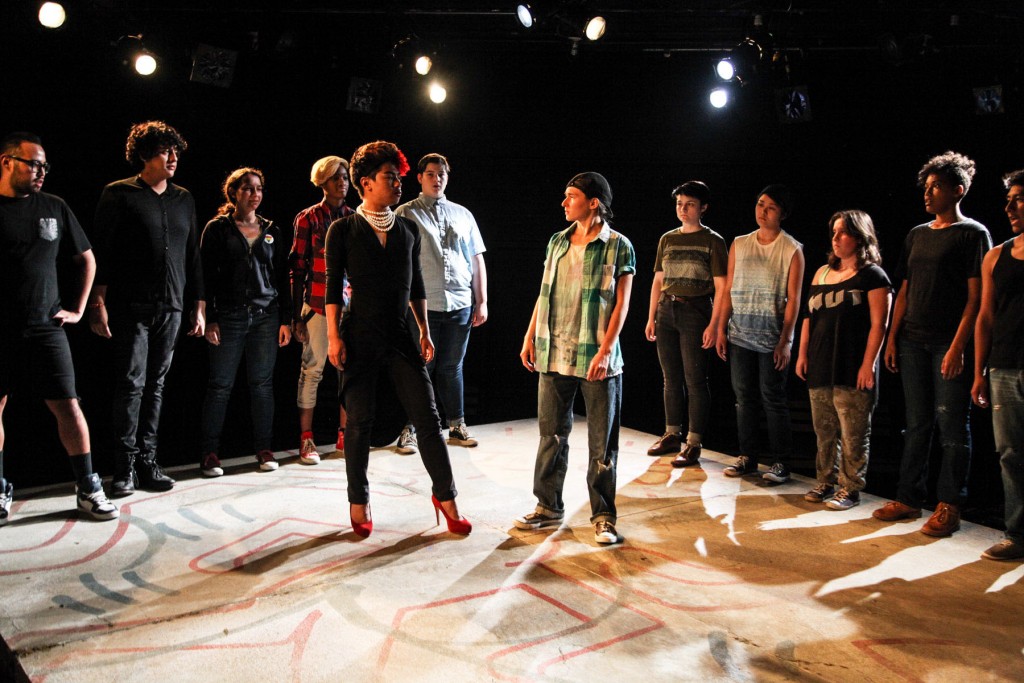 “To be yourself in a world that is constantly trying to make you something else is the greatest accomplishment.” Ralph Waldo Emerson’s words sum up life’s most difficult struggle and it is precisely what is at the heart of About Face Youth Theatre Ensemble’s production of “15 BREATHS.”

Through the eyes of nineteen-year-old Harold, we are taken on a journey of his quest for self-determination. He is forced to leave his small town in Texas for the much bigger city of Chicago after it is revealed that he is gay. We encounter a litany of characters that both impede and advance his quest.

Ali Hoefnagel and the ensemble have created a vibrant piece that celebrates the identities of those who too often are pushed to the margins. Still, the piece is not without its limitations. Several actors play the same roles, some crossing genders. This is certainly okay, but when Harold is initially introduced he is played by a young woman. Although he is referred to as a boy, knowing the focus of the play is on queer people, I initially presumed that the young lady was possibly transgendered. Later on when Harold tells his story the script revealed that she was in fact not transgendered, but playing a boy. However, the older woman he meets is referred to as she, but she is in fact transgendered. The script eventually clears this up, but it happens a little too late.

There are also moments where the piece presumes the audience knows certain dynamics of the queer community, for example, the role of a “Mother”—which the older transgendered woman is referred to—or a “Sugar Daddy” and how these impact the community.

With something as sensitive and misunderstood as queer identity, it is important to clarify and educate those who are not a part of the community as much as possible. There are so many misconceptions, making it even more important not to leave things up to interpretation. Leave no blurred lines.

Still, despite its limitations, “15 BREATHS” is worth the watch. (Loy Webb).