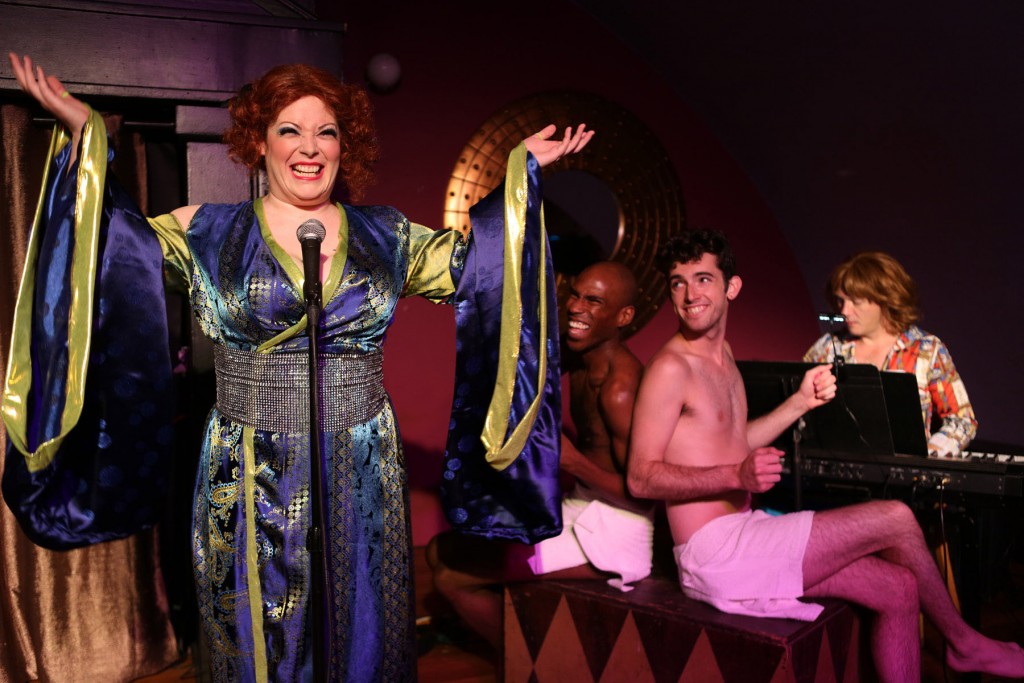 Ever the crowdpleasers, the folks at Hell in a Handbag follow the touchy and pushy “Miracle!” with a loving tribute to Bette Midler, a longtime ally and prominent cultural icon in the gay community. Less openly transgressive than “Miracle!,” “Bette: Live at the Continental Baths” nevertheless contains Handbag’s characteristic mix of tenderness and camp.

The weight of the production rests on the shoulders—and, I suppose, chest—of ensemble member Caitlin Jackson, who captures Midler’s bawdy humor as well as the underlying pathos that guided her to the Continental Baths in the first place. Jackson makes you feel as though you’ve known her, and by extension Midler herself, for decades. Even when the material doesn’t land—and some of it will not for younger audiences—it still works thanks to her confident presence and preternatural delivery.

While it’s one thing to tell Midler’s jokes, it’s another to sing her songs. Jackson’s remarkable ability to transition between raucously sexual, emphatically approachable and deeply melancholy makes it possible to hear “Mambo Italiano” within the same show as “I Shall Be Released” and be roused by both. Tickling the ivory and filling out Handbag’s wig budget is Jeremy Ramey as Barry Manilow. When they are not supplying backup vocals or catcalls, T.J. Crawford and Will Wilhelm provide twinky anecdotes and a couple of bubbly, fun numbers, which allow Jackson time for a costume change or two, or, to borrow Crawford’s words: “to get her tits into the dress.”

While the baths declined in popularity by the end of the seventies due to the clientele beginning to feel like set dressing for an increasingly heterocentric audience, the affection for The Divine Miss M never waned. Since then, Midler has come to represent a modern performer who balances the giddiness of the past with the “heaviness” of the present. Like her real life counterpart, this entire production radiates humor and grace even at its most openly and deliciously depraved. If it perhaps does not offer any titillating surprises, “Bette: Live at the Continental Baths” still succeeds in delightin’. (Kevin Greene)