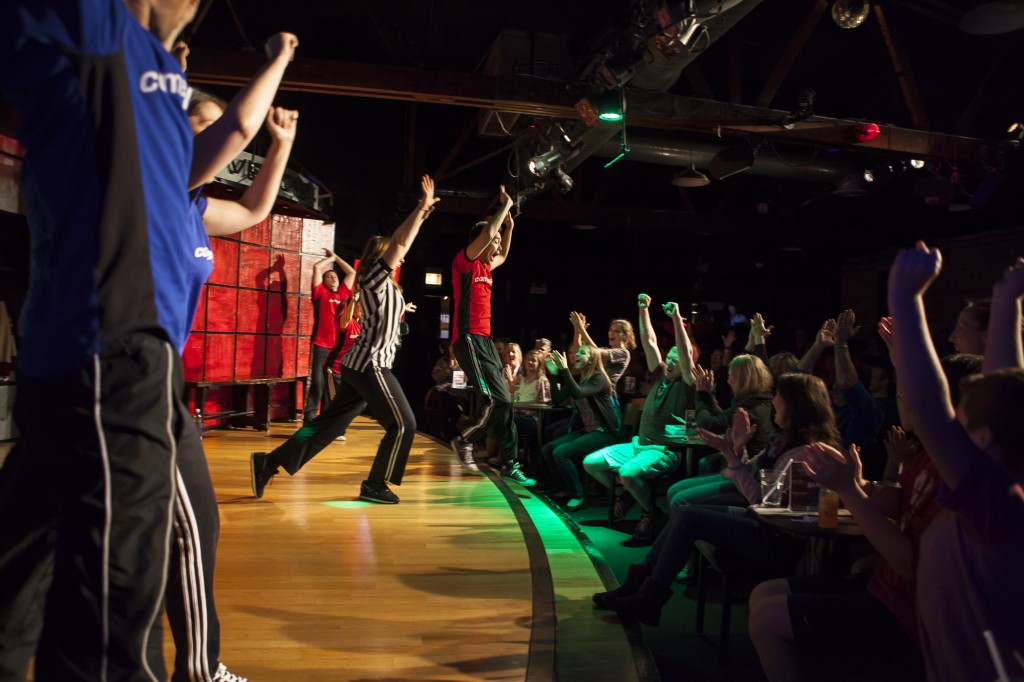 A brand since 1984, in Chicago since 1987 and in their current digs on Belmont since 2007, ComedySportz has clearly hit on a winning formula, proudly maintaining the title of longest-running short-form-improv comedy show in Chicago and extending that run every week. And short form it is, with quick, fast-paced games (most familiar to anyone with a little exposure to improv) making up the majority of the ninety-minute running time, which plays out as a competition between a blue home team (the Chicago Bosses) and a red visiting team (the Lyle Lovetts on the night I attended).

The lovely hardwood stage looks like a cross between a locker room, a performance space and a basketball court, with each team of three jerseyed players given a bench and a television screen to track their ongoing score. Points are awarded based on the success of improv games and there’s an announcer, a referee, an Applause-o-meter and… much like the show itself, which spends a solid ten minutes on introductory information, I’ve already used up a good deal of real estate explaining the premise. Suffice it to say that there is improv, there is competition and there is comedy.

There is also a very important line drawn regarding “taste.” Notably, this is a show for all ages, with improvisers working to deliver “smart, clean comedy,” a goal that helps explain the broad age range of audience members at the eight o’clock show I saw. And with so much audience input required to move a show like this along (seriously, so much!), this becomes a major bonus, as young children throw out some of the best suggestions and certainly make for the best audience volunteers. It’s a fast-paced, consistently positive show, almost to a fault (call me cynical), but the rotating cast of performers knows their audience and how to win them over. If you’re looking for off-color, envelope-pushing comedy, this is not the place (though the ComedySportz Theatre does have other, adult entertainment), but if you want to order a beer while watching your six-year old laughing because her suggestion was used, congratulations, this is it. But I’m making too much of that clean rule—this is still funny for you dirty-minded audience members as well. (Zach Freeman)