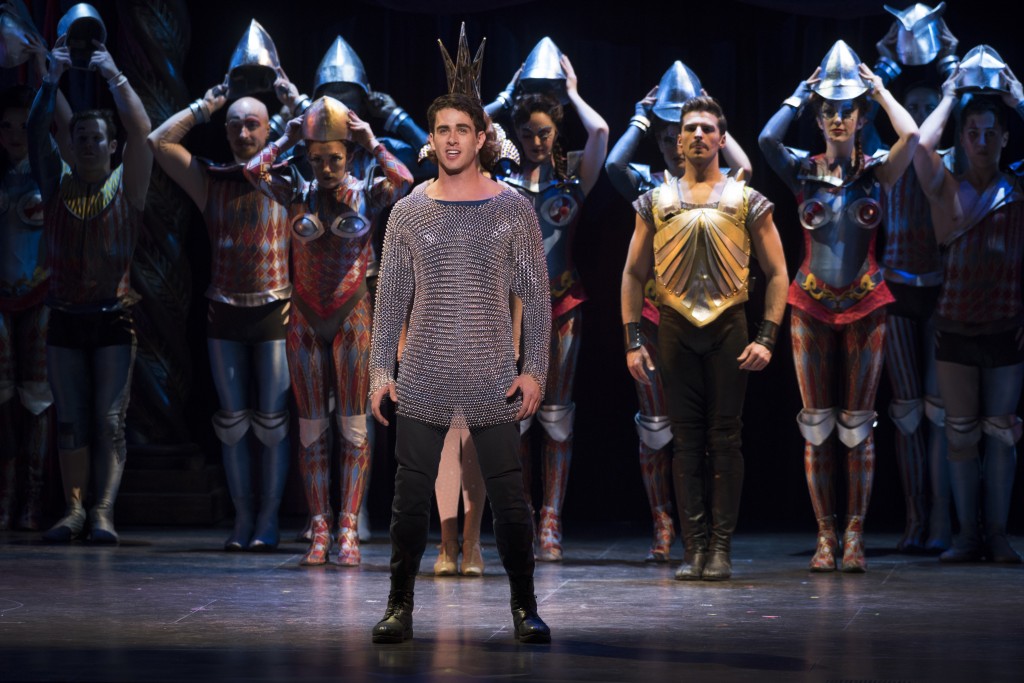 Mind-numbing with its soft-rocky up-tempo songs and pop-ish ballads, the 1973 and 2013 Tony Award-winning “Pippin” continues to charm all save the occasional music lover. If any song in “Pippin” can be interpolated into any other Stephen Schwartz musical and vice-versa, the fascinating characters and the universal truth of this storyline authorizes this circus-cantata’s continuance in the canon.

John Rubinstein, here seen as Charlemagne, originated the role of Pippin. Rubinstein’s fluty delivery of “Corner of the Sky,” the best-known number in the score, caused every musical theater kid in the 1970s to attempt to imitate him (for most of us, to no avail), which is shocking when one compares the sandpapered, death-rattling vocals of Rubinstein’s King. Either he has such a solid technique that he can make that sound, and have vocal cords to rub together at the end of the week, or he is using the ruination of his instrument for employment perpetuation. His characterization recalls that of Terrence Mann, the King of the Broadway remounting, to the point of suspicion.

As Pippin’s grandmother Berthe, Adrienne Barbeau proves why her star continues to burn; her gift for combining the dirty twinkle with a little-girl innocence still charms. She still has the body of death, and can sing upside-down, suspended in mid-air.

Sasha Allen was vocally unintelligible as The Leading Player when I attended, and Kristine Reese’s Catherine was too goofy to create the disturbance that the unveiling of her manipulation should offer. But hunky Erik Altemus’ Lewis is hysterically sexy-dumb, and Sabrina Harper’s Fastrada is all legs and wicked-witchery.

If there is too little of the expected Fosse, even when it is attempted, the real circus performers bring magic to the otherwise intimate story that is worth the price of the ticket. (Aaron Hunt)