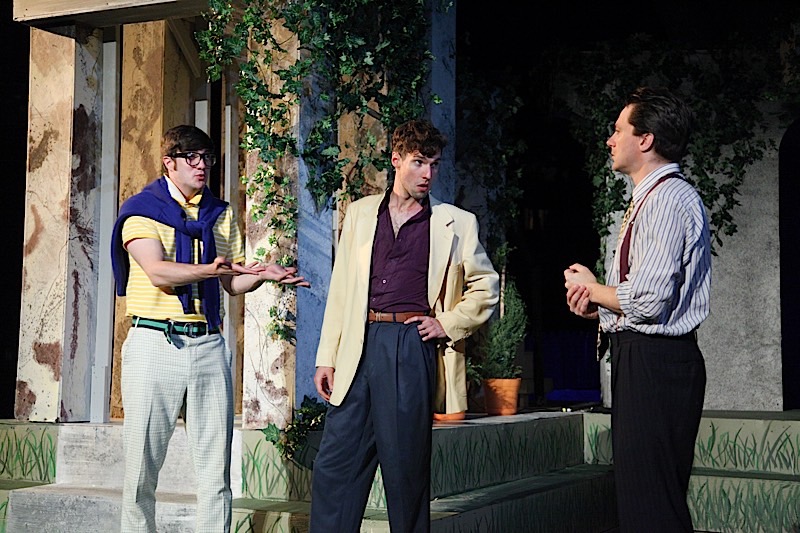 Is there a more appropriate way to pass the dog days than with Shakespeare’s canine comedy? This early, patchy and problematic work—whose dramatic summit is the appearance of Crab, the melancholic mutt—is essentially a two-and-a-half-hour warm-up exercise for the career to come. Its glimpses of genius in training are scattered within a plot that lurches rather than flows and ends without delivering a dose of poetic justice. To succeed on stage, “Verona” must be played as a pure farce, distracting us from the script’s dropped stitches. It shouldn’t just be the dog that chews the scenery.

Director Lavina Jadhwani—together with costumer Emily McConnell—sets the action circa 1983, with doltish suitor Thurio (Tim Martin) done up “Preppy Handbook” style, and everyone else bringing back long-repressed memories of the Brat Pack and “Beverly Hills 90210.” Maybe it’s meant to link the feudal arrogance of Verona’s privileged gentlefolk with the consumerist excesses of the Reagan era. Or maybe the troupe is just having a little retro fun. Unfortunately, the silliness is only skin deep, plastered atop a sometimes sticky earnestness. The result is a show that’s serviceable and intermittently entertaining, but which never achieves a consistent tone or point of view.

The storyline—a convoluted bromance involving saucy servants, jilted lovers, tyrant fathers and oddly cooperative bandits—isn’t worth going into. The real drama is in the relationship between leads Proteus (David Keohane) and Valentine (Michael Pogue), as they move from friendship to secret rivalry, and from betrayal to a spurious forgiveness and reconciliation, achieved at the expense of female characters Silvia (Sigrid Sutter) and Julia (Vahishta Vafadari). The play’s sexism is the proverbial turd in the punchbowl, and director Jadhwani fails to confront or subvert it.

The good news is that Keohane’s and Pogue’s chemistry gives a sparkle to the script’s glibness and compensates for the stiffness of other performers, including Vafadari, an appealing young actress not yet ready to take on her shifting and demanding part.

With its stock characters and contrived plot, “Verona” comes off as a spoof of Elizabethan pop culture. This production has its moments of mirth, but in the end feels more like an eighties nostalgia fest than a satirical poke at our own follies and clichés. (Hugh Iglarsh)