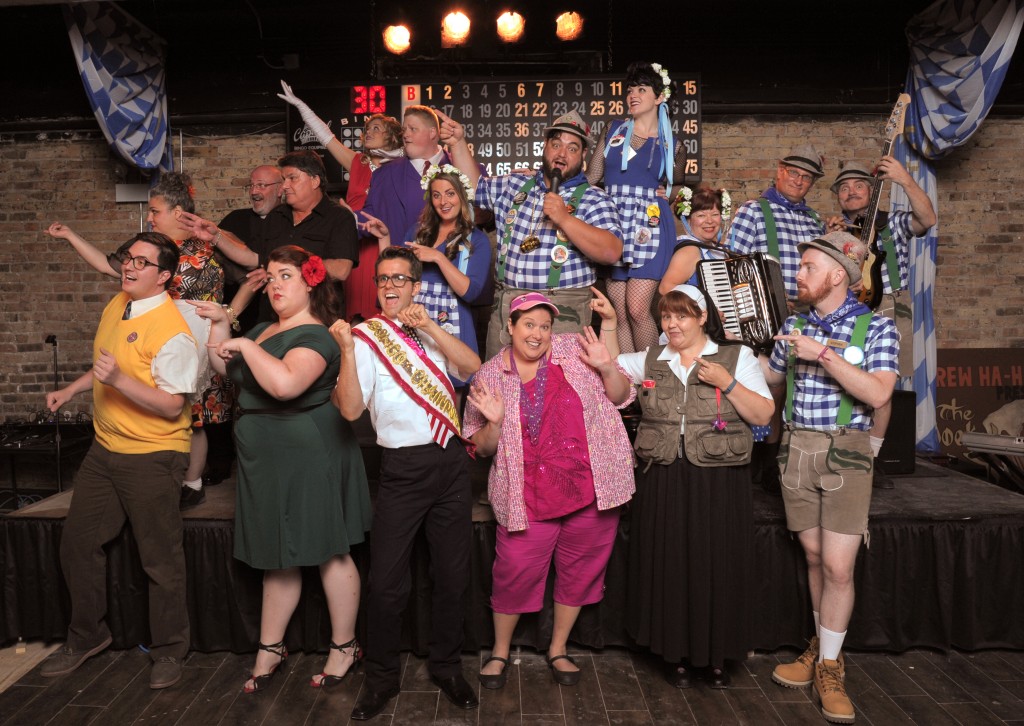 With the rowdy interactive dinner theater show “We Gotta Bingo, ” Chicago Theater Works throws itself into the Belmont theater district with gusto, launching a new space (near Stage 773 and Theater Wit) and a new show in that space at the same time. The space is charmingly retro and worn in, done up for “Bingo” as German brewpub “Der Brew-Ha-Ha,” a fictional venue not unlike Lincoln Square’s Chicago Brauhaus. As you enter to grab your table for the evening, a polka band is churning out pop covers and a menagerie of overly exuberant caricatures are making the rounds glad-handing their hearts out. As one cast member-in-character informed me: “There’s a lot going on!!!”

And over the course of this show-cum-dinner-cum-bingo extravaganza a lot does go on. The general storyline is that two rival parishes—one Irish, one Italian (yes, every stereotype you can think of for either is thrown out here)—have gathered in this German pub (don’t forget German stereotypes too!) for a charity bingo tournament that will raise money for a merger. Only maybe the leaders of the two parishes aren’t so hip to merge, seeking alternately brotherly love toward and one-upmanship over each other from their followers (the audience).

Despite all the buoyancy and drive that moves director Ross Young’s show happily along, it’s a bit too meandering and unfocused to maintain the kind of momentum it seeks to deliver for two-and-a-half hours. For every moment that works—every time Jane Allyson-D’Arienzo’s Rosa declares “That’s a good prize!” in regard to the various thrift-shop wonders that Bingo winners are awarded throughout the night, it hits—there are just as many moments that fall flat or go unheard.

But hey, there’s singing, dancing and bingo, all with heavy doses of audience participation. There’s also constant crowd work and individual exchanges. If you’re the type of audience member who hopes to remain unmolested during an interactive show, you’re liable to fail here—the cast is large, friendly and dedicated to their jobs. If you like to drink and yell things at performers while they gamely yell back at you, you’ll likely find this bingo night exhilarating. (Zach Freeman)