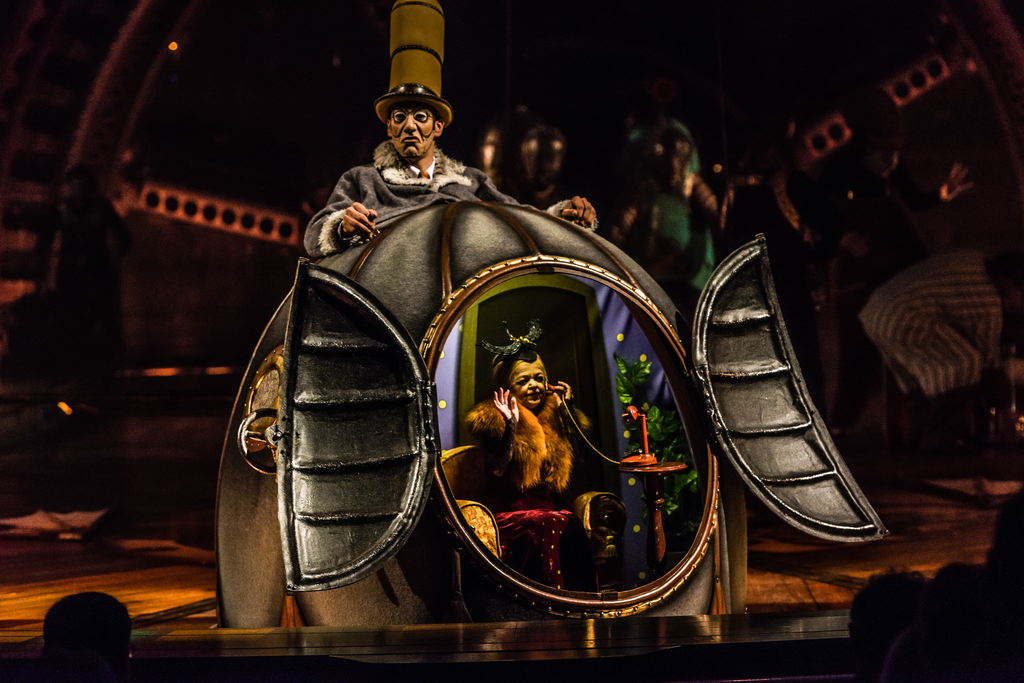 To some extent, every Cirque du Soleil show is dreamlike. Writer/director Michel Laprise’s “Kurios—Cabinet of Curiosities” is the first I have seen that makes that scenario explicit. Though ostensibly set in “an alternate yet familiar past”—embodied by a set (Stéphane Roy) and costumes (Philippe Guillotel) that steampunk fans will flip for—the show features a wide-eyed character called the Seeker who climbs into a gigantic wooden chair for a rest at the start of the show with a clock behind him stuck at 11:11 and returns to it at the end to open his eyes just as that clock trips over to 11:12. Since everything that happens in between is purely fantastical, the book ending is apt.

Throughout its two-hour running time—including a twenty-five minute intermission, which only seems long until you see the lines for the bathrooms—“Kurios” delivers. This may be a pop-up show in a parking lot of the United Center, but it’s the full Cirque experience. As soon as you enter the temporary Big Top structure you’re engulfed: with Cirque merchandise, concession stands and costumed actors, among other things. And the space itself is large enough for an actual circus; the true height of the ceiling is repeatedly explored in the high-energy acts that fill the Seeker’s imagination.

There’s a woman who performs acrobatics while riding a bike upside-down through the air, a quartet of contortionists on a monstrous hand pointing at the audience and a chair-balancing act that starts out impressive but becomes mind-blowing when you realize that the identical scene is unfolding from the ceiling down, with a chair-balancer stacking chairs heading toward the ground. “Kurios” even goes beyond dreamland and into Lynchian territory when a character named Mr. Microcosmos opens his orb-like belly to reveal Mini Lili—a little woman who apparently lives in elegant chambers in his midsection.

The show is best at its most nonsensical and a scene where bearded, rain-coated dudes parade across the stage only to transform into fishlike creatures that then bounce off clouds and a stage-wide trampoline is the apex of a consistently jaw-dropping night. Leaving the tent you’ll feel like you must have dreamed half of this. (Zach Freeman)