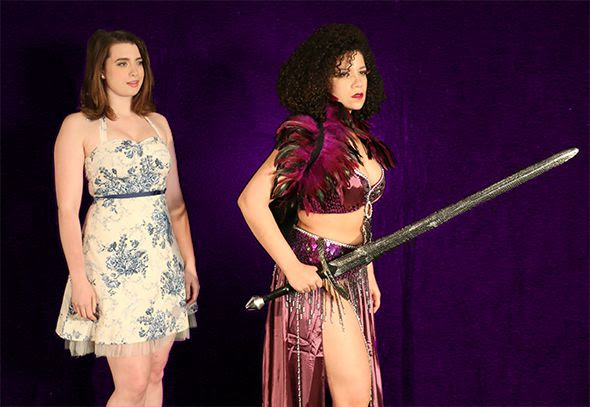 Before the performance of “In Love and Warcraft” began on Sunday night, one of the show’s actors explained Halcyon Theatre’s philosophy of radical hospitality: the cast, crew and company bend over backwards to make the audience feel at home in their shows. This includes leaving free seats available for people who can’t afford to see the show otherwise, talking to audience members before and after the show, and working with the local community outside of the production. This attitude permeates the play itself; taking place in Christ Evangelical Lutheran Church’s basement, it almost feels like you are in the comfortable living room of a kind-of-religious friend who also likes nerdy plays. It helps that the show’s material, a story of… well… love and Warcraft, is refreshingly approachable and relatable.

Evie Malone, played with delightful energy by Siobhan Reddy-Best, has a complicated relationship with the massively-multiplayer online role-playing game Warcraft and an equally complicated relationship with romantic love and sex. It’s rare to see a “nerd” character in a play not being treated as a joke or a stereotype, and Evie truly feels like a fully realized human being. In fact, Madhuri Shekar’s script treats each of its characters, including Evie, her sex-addicted roommate Kitty (Claire Reinhart, who owns the stage every time she’s in a scene), and her love interests—Raul (Kroydell Galima) and Ryan (Brian Bradford) like real, fully formed people… some of whom just happen to spend time going on raids with their level thirty-four Night Elf Hunters.

Shekar’s script feels very much like a typical Hollywood romantic comedy in some ways—girl meets boy, they fall in love, disaster, they get back together (maybe)—but director Tlaloc Rivas has formed it into something that feels unique. This show stands out in that it takes these tropes, mixes them with a heavy dose of geekery and then proceeds to evolve into an animal all its own. “In Love and Warcraft” is fun, funny and, by the end, deeply touching. (Sean Kelley)