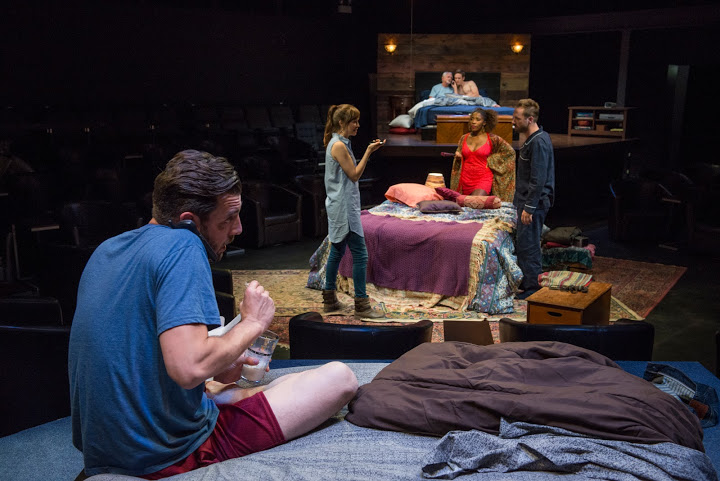 Earlier this year Newcity ran a story about the opening of the Windy City Playhouse and the launch of their first season. In it, artistic director Amy Rubenstein called it “the gateway theater,” saying she hoped that people who don’t typically see theater would check them out—with their full bar, club-like setting and high-quality escapist productions—and be inspired to see more theater. Though we reviewed their first two shows favorably, I hadn’t been to the space yet myself. After seeing “Things You Shouldn’t Say Past Midnight”—a quick-moving, lighthearted, sometimes circuitous and slightly dated, but always entertaining production—I’m happy to say that this theater is delivering on their ambitious plan.

With Kevin Depinet’s three distinctive bedroom sets cutting a diagonal through the playing space, and black leather chairs spread around the room (with individual side tables for drinks), the initial impression is almost of a classy strip club. Given the subject matter of playwright Peter Ackerman’s six-character romp—sex, insecurity and… sex—it’s an appropriate vibe.

The show starts out with a sex scene between Nancy (Emily Tate, both forward and furtive) and Ben (Peter Meadows, who needs to scale down his performance for this intimate space), a scene that climaxes (literally) with her calling him something blatantly offensive as they both orgasm. This sets off the rest of the show, sending Nancy to seek guidance from her friend Grace (a powerfully sultry but comedically gifted Patrese McClain). But Grace is in the middle of her own relationship struggles, as she attempts to get hitman Gene (an endearingly mopey and playful Shane Kenyon) to focus less on his feelings and more on her body.

As the action travels from set piece to set piece, director William Brown builds the comic pressure up skillfully, pushing through Ackerman’s more repetitive dialogue and slowing down for the punchlines. When the third bedroom is added to the mix—Gene’s therapist brother Mark (Chris Sheard, eye candy in a speedo) and his latest lover Mr. Abramson (a scene-stealing Robert Spencer)—the show really hits its stride. There’s something in here about the fear of rejection and political correctness stifling our emotional instincts, but Windy City Playhouse wasn’t created to dwell on those themes. They want you to laugh. And maybe have a cocktail. This show deftly facilitates both. (Zach Freeman)