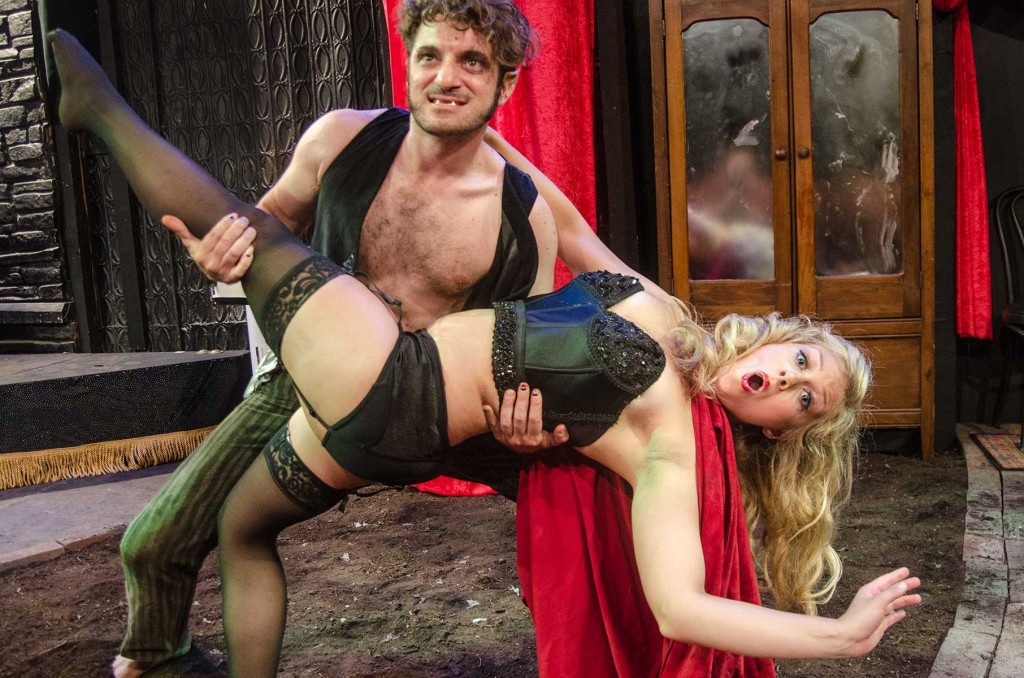 I’d like to offer an analogy that I think Joan Schenkar, the rare American playwright at the European-leaning Trap Door Theatre, would approve of: “The Universal Wolf” is theater as ouroboros. Insistent on “deconstructing”—a French term for taking the piss, apparently—at every potential dramatic impasse, “The Universal Wolf” consumes itself until its potential for being revelatory has been completely absorbed by its unrelenting need to be referential.

The play has all the hallmarks of a collegiate work. It applies linguistic, philosophical and psychological terms with little regard for their actual usage, leeches on to pre-established mythical structures while simultaneously attempting to break them down, and possesses a grating, indulgent cockiness. All of which causes this already incomprehensible work to border on being distasteful. And not in the way Schenkar likely intended with her broad use of burlesque sexuality and dusty macabre humor. Named for a line from one of Shakespeare’s most ambiguous and—notably—under-produced works, “The Universal Wolf” reeks of half-baked intellectualism’s cheap cologne.

Which is honestly quite a shame since Trap Door has fostered real talent, especially when it comes to design. Richard Norwood’s lighting is impressively expressive given the theater’s limited space. Similarly, Nicholas Jackson makes good use of Trap Door’s unique floor plan with a set that is appropriately surreal and surprisingly adaptive. Emily Lotspeich embodies the spirit of the storefront as the play’s prop and makeup designer as well as its director. The multi-talented cast possesses enthusiasm bordering on real joy, though they can only do so much within the constraints of Schenkar’s pretensions.

At its outset the play promises to make the audience feel alive. Perhaps glad to be so at its conclusion, but no more so than if you’d spent the evening at home on the couch. While Trap Door’s mission of resuscitating lesser-known works has a certain kind of nobility, I can see little reason why “The Universal Wolf” could not have been left ensconced in the tomb of mediocre theater. (Kevin Greene)