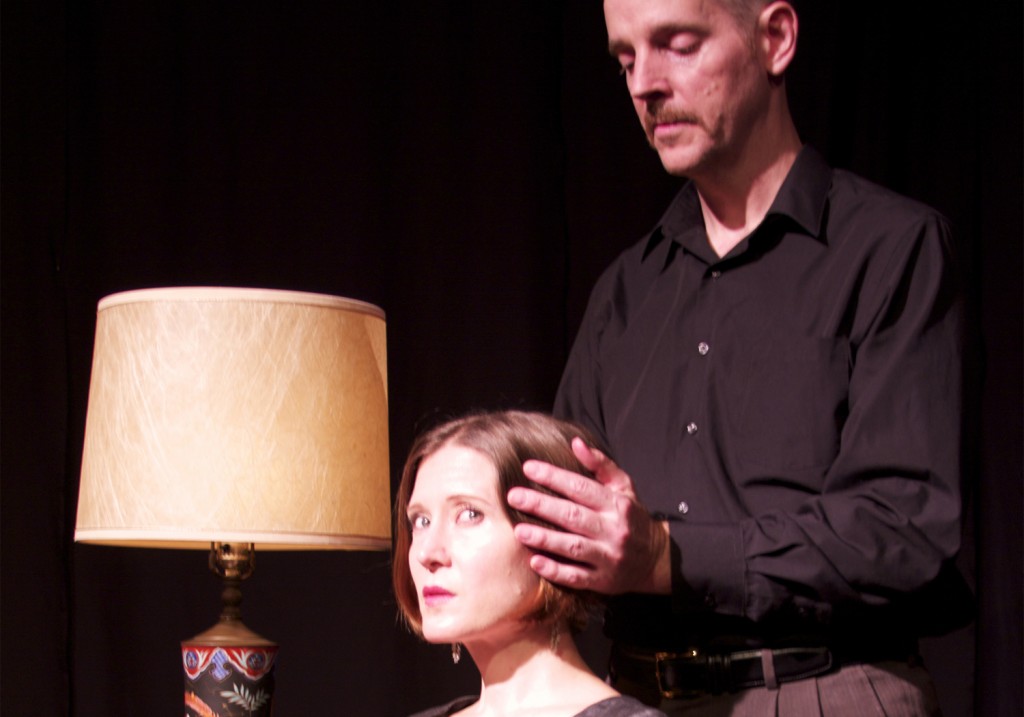 Harold Pinter’s plays often seem longer than they are thanks to the fact that he intentionally calls for prolonged pauses and silences within his scripts. Because of this, those who attend “Ashes to Ashes” at INTUIT: The Center for Intuitive and Outsider Art, may feel that they have witnessed an epic piece of theater, although they’ve only been seated for about fifty minutes.  Thanks to the topics within the play, no matter how brief the duration, it remains a piece of epic proportions.

The two-person cast of Mike Driscoll and Simone Jubyna bring to life Pinter’s married couple, Devlin and Rebecca, respectively. The two sit in two chairs with two lamps nearby. Jubyna never rises from her seated position, while Driscoll occasionally paces, stares at a piece of art on the wall, and returns to his chair. The action is obviously simple. The concepts and issues being addressed are not. On its surface the play is about a man interrogating his wife about a love affair, a potential infidelity. At a deeper and more satisfying level it is about being a survivor, about one woman’s attraction to the darker side of our natures, about PTSD and how the families of its sufferers struggle to understand.

One of the major challenges of producing a Pinter work is to make sure that each pause and silence means something, that the quiet on the stage is filled with the same intensity as the words. Or, ideally, with more intensity than the spoken lines. Driscoll is especially good at this aspect of the performance. If you could edit together a video of just his silent segments, I would watch it happily.

Jubyna plays Rebecca with a cold outward demeanor that at first appears to be stuffy British pretension at its stereotypical best, but as the play progresses, she is clearly putting on a front that hides her pain, horror and suffering.

As a companion piece to INTUIT’s current exhibition of the works of Badaskhan Zakoian, a survivor of the Armenian Genocide, this production works perfectly. (Christopher Kidder-Mostrom)