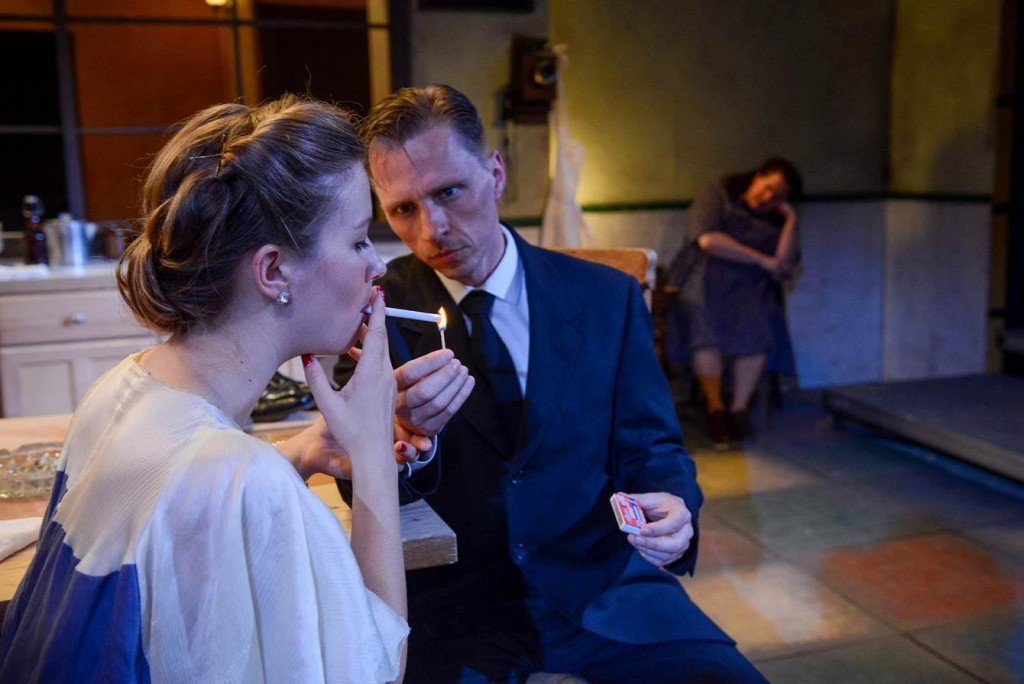 Strawdog Theatre Company lives up to the theme of their twenty-eighth season, “The Tipping Point, ” by thrusting audiences into the basement kitchen of an English aristocrat just before the UK’s 1945 general elections, the elections that would finish Churchill and his conservatives in favor of the Labour Party. This production of Patrick Marber’s “After Miss Julie,” a modern take on August Strindberg’s 1888 classic, firmly reminds us of the countless filaments of personal struggle that light the way to tipping points, confusing, along the way, individual desires with social mandates and larger national movements.

The production is a swift eighty-five minutes and exposition is thankfully minimal in Marber’s script. As Christine the cook (Anita Deely), John the chauffeur (John Henry Roberts) and the titular aristocrat’s daughter (Maggie Scrantom), the cast does well in filling out their characters with strong acting in lieu of too much background. As the play unfolds, we witness the unstable Miss Julie undoing herself and her sex/love interest, John, as they swing from the bars of the strangely poetic jungle gym of mistress/servant power dynamics. Christine, once engaged to John (who initially appears very committed to her, his serving in the war having been the reason for the broken engagement), patiently observes John and Miss Julie’s coupling, falling under no illusions that the encroaching tides of social change will lend any extra freedom to her and John’s lives.

Daringly drawn-out silences, filled with the compelling motions of smoking and the less compelling motions of kitchen clean-up, give the audience enough time to process the roller coaster of Miss Julie’s tempestuousness. They also give the audience enough time to appreciate the period set design (Mike Mroch) and costume design (Brittany Dee Bodley). Ideally, in these drawn-out silences, you’ll be wondering about the tipping points of our own moment (GOP identity crisis and how on earth it’s going to play out next year, anyone?) and walking away from the theater, maybe you’ll be inspired to attempt disentangling your own tipping point narrative from that of the nation’s, even though John and Miss Julie ultimately fail to do so. (Joy Miller)