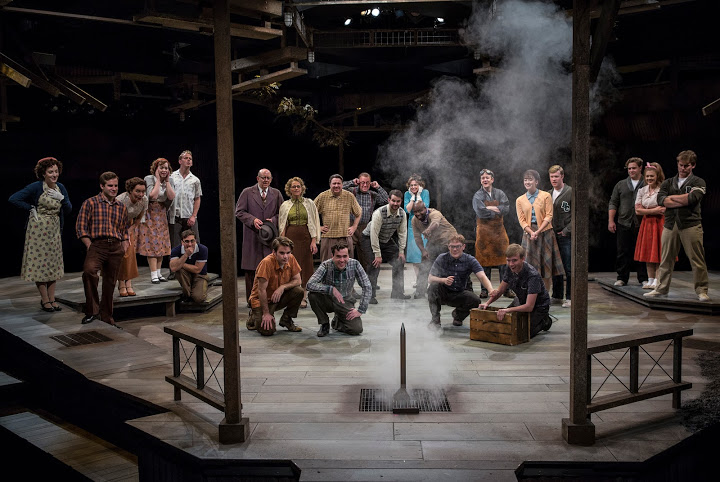 From Homer J. Hickam’s memoir, to a Universal Studios film, comes a musical retelling of an ageless, American story of the right, and the ability to rise above one’s circumstances through a vision bred of curiosity, hard work and determination, and the support of families, large and small. “October Sky,” with a book by Aaron Thielen, music and lyrics by Michael Mahler, and directed by Rachel Rockwell, makes its world premiere at Marriott.

Musicals have awkward births; stories of second acts that didn’t work, beloved songs discarded and lost for decades, and directorial revolving doors are myriad. “October Sky” is an exception that proves that rule. Thielen’s book is perfectly paced, focusing on the characters that drive the central arc, granting others a fond resonance while keeping them in supporting positions. Mahler works a compositional miracle here, dipping into Appalachian folk music, bluegrass and rockabilly, all informed by the contemporary musical theater idiom; the result is a mixture of uptempo gems and the type of soaring ballads that weds the Great American Songbook to popular music. Rockwell’s direction is subtle, drawing performances from her ensemble that delicately suggest an era and destination; from the accents to the intentions, she opens the story’s lens.

David Hess, as the father-foil, makes much of a difficult assignment, allowing us to desire a father/son reconciliation while singing in fine voice. Johanna McKenzie Miller’s teacher is a study in harmonious strength and vulnerability, her beautiful voice reinforcing the delineation. Chicago-treasure Susan Moniz’s mother is a delight; Moniz can say a paragraph with an eyelash-blink and lay down a tune with the first inhalation, and she does.

As Americans prepare for another vitriolic presidential election, “October Sky” is a salve, reminding us of the familial nature of our collective journey. (Aaron Hunt)