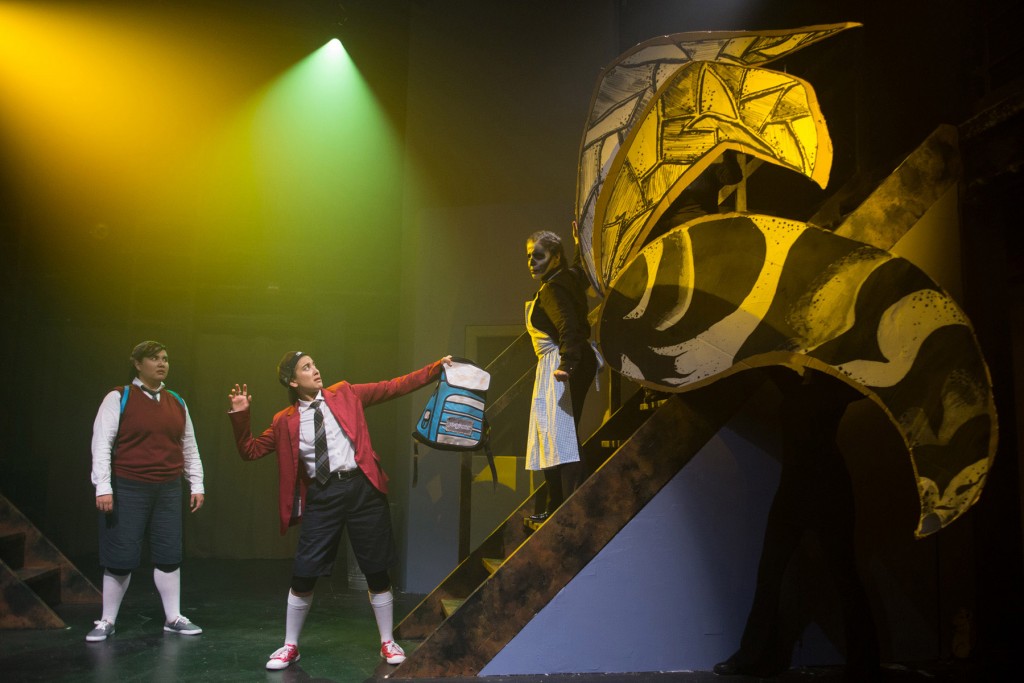 In the world premiere of Juan Francisco Villa’s “Don Chipotle” it’s difficult to distinguish between the real and the fantastical. And while that may work for Cervantes in “Don Quixote, ” it is mostly bewildering in this production. The circumstances surrounding eleven year-old Celestino, who (thanks to Angelica Roque’s theatrical chops) slips comically in and out of his alter-ego Don Chipotle, are a little too horrible to be subjected to the episodic parodies that ensue.

Through an overwhelming use of multimedia (think: children’s choir, video/animation art, rap/musical numbers, xylophone…) we witness Celestino/Don Chipotle come to terms with the fact that his uncles are gangsters, that he has been deceived throughout his childhood about the bloody acts that keep his family afloat. Celestino’s discovery of a couple of bricks of cocaine in his mailbox kicks off his knightly adventures as he runs away to hide the contraband.

The many nods to “Don Quixote” are easy to take for granted, given that one could point to literally anything (a windmill!), call it a giant and then claim it as a Cervantes reference. And so it goes in “Don Chipotle.” Trains become dragons, a prostitute doesn’t become a fine lady like in Cervantes but instead becomes a “Hansel and Gretel” kind of witch who feeds Don Chipotle and his friend, Octavio (Karen Rodriguez) a “magical” cookie. One of the more unnecessary elements in the show is the religiosity, stressed in instances such as the “scripture-off” between Don Chipotle and the prostitute. This biblical jousting is oddly ended when the prostitute cheats to win with a Tom Waits verse (“I’m close to heaven/Crushed at the gate/They sharpen their knives/On my mistakes”).

In Cervantes’ “Don Quixote,” much of the humor comes at the expense of protagonist Alonso Quixano, who prefers the chivalrous fantasies of romances to his life of lower nobility. But the use of Cervantes in this DCASE Storefront Theater production often seems bizarrely inappropriate, as much of its humor also comes at the expense of its protagonist who, unlike Don Quixote, is a boy without the comforts of lower nobility, preferring to escape reality with fantasy. (Joy Miller)

terraNOVA Collective and The Playground Theater at the DCASE Storefront Theater, 66 East Randolph, terranovacollective.org, $15. Through September 27.