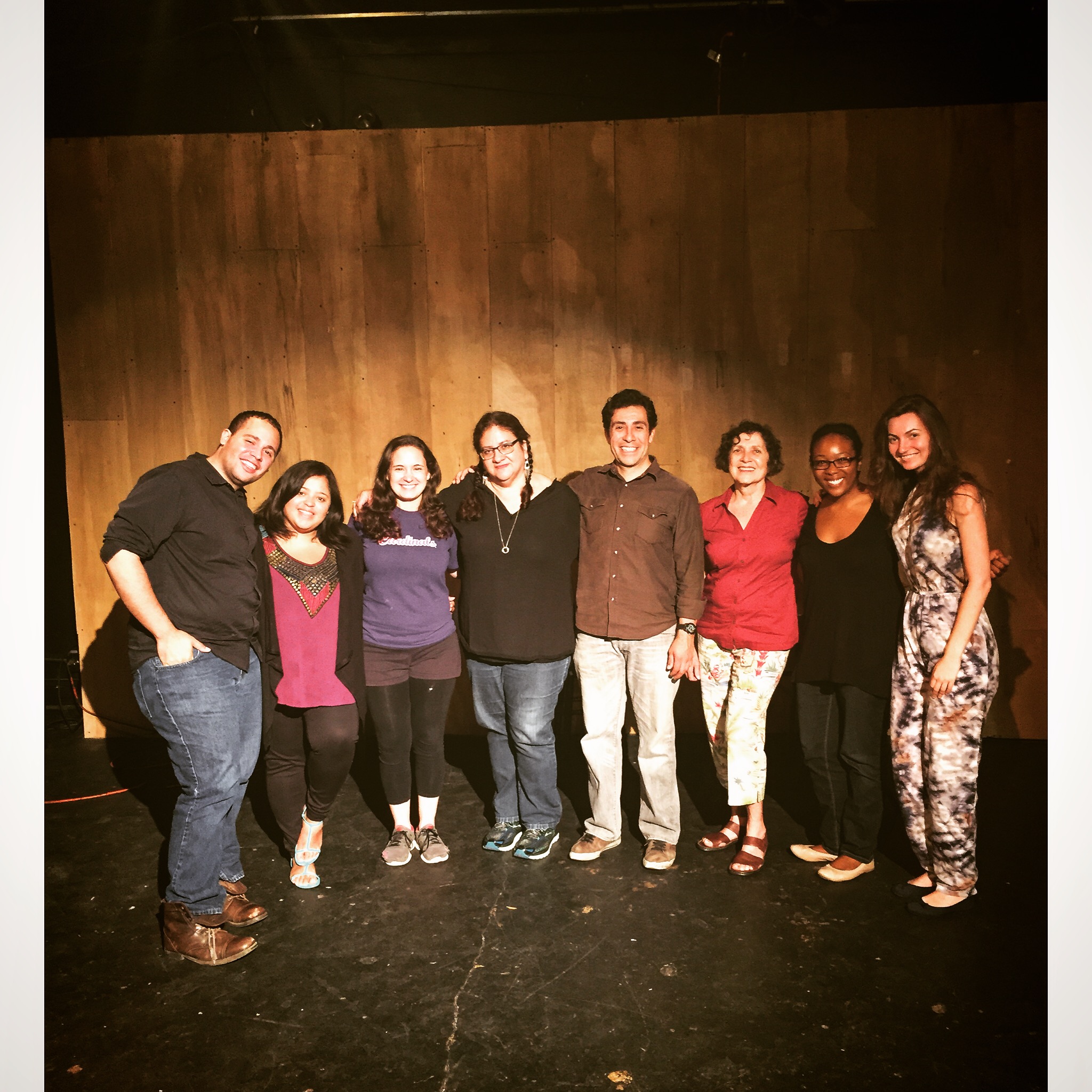 Playwright Migdalia Cruz and the Cast of “Yellow Eyes”

On a warm, sunny Tuesday night, the founders of a new theater company have retreated into the cool, dark Jackalope Theatre in Edgewater. The large storefront windows are covered with black material and rows of chairs cluster around a small stage. It is the second week of rehearsals for Visión Latino Theatre Company’s inaugural play and the show’s actors will arrive soon.

Xavier M. Custodio, Yajaira Custodio and Johnathan Nieves—the founders of Visión Latino—sit around a table onstage and tell how the company began. Their passion for the venture is palpable—all lit-up eyes and fast talking.

Each founder has a background in theater. Xavier is an actor, director and musician and is the current fine and performing arts department chair at South Shore International College Prep. Yajaira, Xavier’s sister, is an actor and attended The American Musical and Dramatic Academy in both New York and Los Angeles. And Johnathan studied at Second City and Actors Studio Chicago and has appeared both onstage and on television.

The idea for Visión Latino or Latins with a Vision came about in August 2014. The company’s goal is to bring awareness to Latinos past, present and future through storytelling.

“We need a theater that tells what it’s like as Latino artists,” Xavier says.

“We felt like we weren’t connecting with the stories we were seeing,” Yajaira adds. “We didn’t see ourselves onstage.” Through Visión Latino, they want to create a voice that people can connect with, she says. 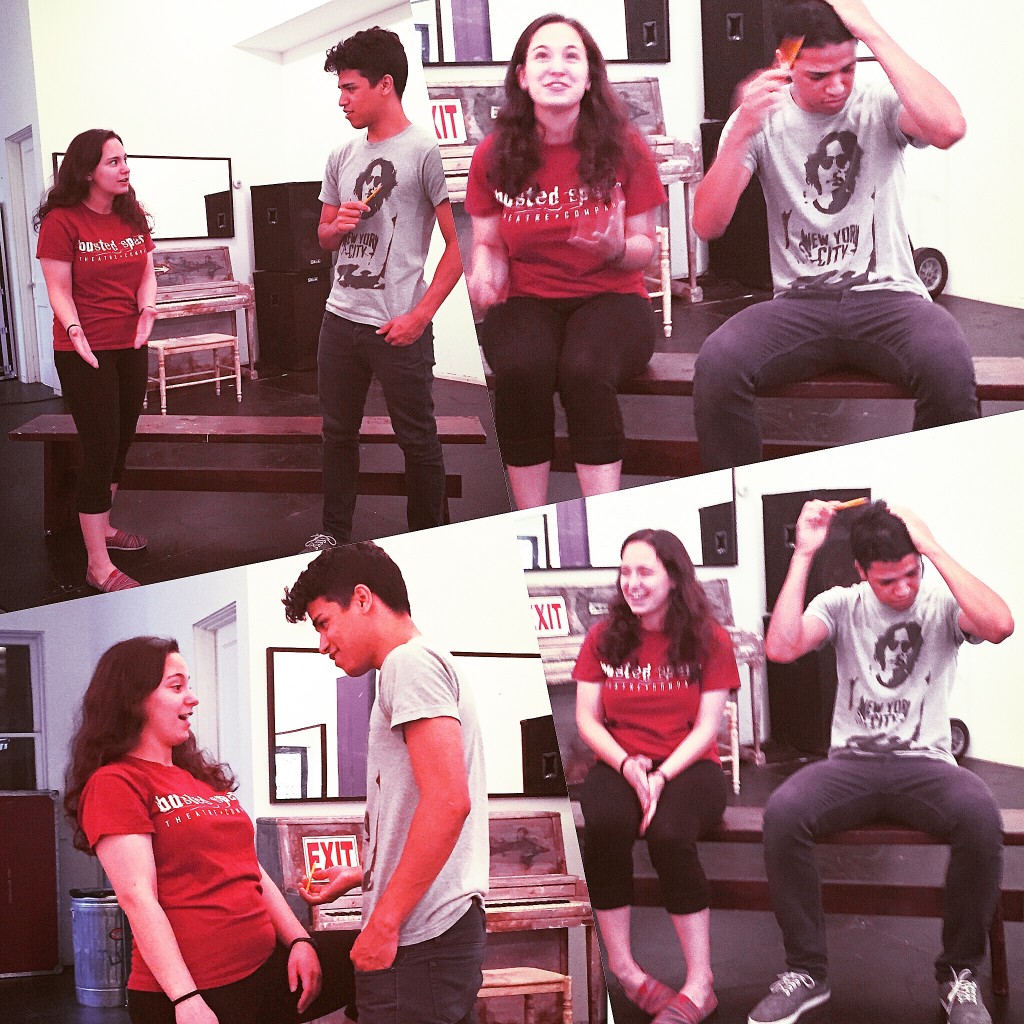 Not just Latinos either. While the company’s official mission applies to bringing awareness to Latino artists and their stories, all three founders say they will be inclusive.

“I love sharing my culture with everybody,” Xavier says. “We want to be able to balance our audience”—young, old, Latino, not Latino—“we want to be open.”

“That’s the cool thing about this first show,” Xavier continues. “It’s all about identity.”

The inaugural show he’s referring to is the Midwest premiere of Migdalia Cruz’s “Yellow Eyes,” which will run in September at Chicago Dramatists. Xavier is directing while Yajaira and Johnathan are part of the cast.

“Yellow Eyes” tells the story of Isabel, a girl living in the South Bronx, encountering danger and racial tension. She finds a safe place at her great grandfather’s home, where she learns about her diverse cultural heritage. This new knowledge helps her find her true identity and navigate her racially-mixed circle of friends.

“‘Yellow Eyes’ really matches with our mission and what we stand for,” Xavier says. “It is cool to see Isabel find out where she fits.”

For Yajaira, Isabel’s story resonates with her own and those of her peers.

Johnathan believes the play’s material ultimately transcends race. The characters use “finding out who they are and where they fit in their culture and stuff like that to almost discover their humanity,” he says.

“Today, in society, people just want to be human,” Yajaira says, whether they’re black, white, Latino, gay, straight, transgender, male, female, whatever. “And at the end of everything, that’s what ‘Yellow Eyes’ is about.”

The play’s author Migdalia Cruz has been immensely helpful, Xavier says. She’s provided extensive insight into the play and its characters, even going so far as sending an essay on her own great grandfather, which was the basis for the play. Cruz will visit rehearsals tomorrow, which Xavier, Yajaira and Johnathan say they are really looking forward to.

Cruz’s help is just one example of the support Visión Latino has received since it began. All three founders emphasize how much encouragement and assistance they’ve received from both their Latino community—they hail from Hermosa and Humboldt Park—and from their theater one.

For “Yellow Eyes,” they’ve had friends volunteer their services to do costumes and lighting free of charge because they believe in Visión Latino’s mission. Fundraising, however, has been their biggest challenge, Xavier says. They’ve learned not to beat around the bush and instead just come out and ask for the money. And perhaps most importantly, to not let the “nos” get them down.

As for next steps, Visión Latino won’t put on another play right after “Yellow Eyes.” Instead, they’ll focus on becoming an official nonprofit organization. After that, they have big goals, which are all part of a ten-year plan. They want to expand, have their own building, include an education component for children and be a bilingual theater company. They also want to put on their own original productions in addition to established plays.

They hope these original works will tackle a variety of issues.

“Immigration is a big one,” Xavier says. But also the stories of “people who have done great things in the world and haven’t been recognized.”

Mostly, they want to be a big voice in the city.

“Chicago’s known as one of the most segregated cities anywhere,” Yajaira says. “We want to be able to break down those barriers.”