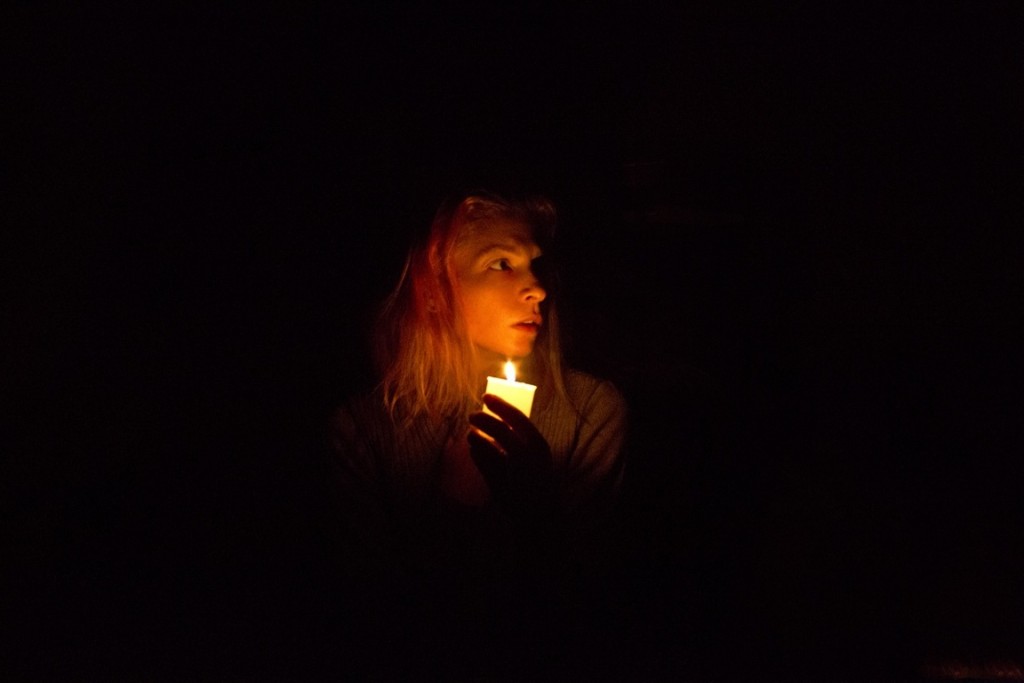 More scary than conventional horror is the play that preys upon its audience with an almost plausible storyline, framed by the believable extremism that lurks in the  margins of America. “Anna, in the Darkness” is a quick forty-five minutes of terror, portraying a teacher demonized by her small community for her sinful teaching methods (she wanted to teach kids how to want to learn to read, rather than just how to read). That… and she may or may not have killed her students.

Megan Merrill crafts a deliciously ambiguous Anna: are Anna’s demons real or imagined? Does she deserve the community’s damnation or is their harassment unjust? Anna keeps promising to tell us what really happened, what she actually did to her students, but the longer she withholds this confession, the more likely it seems that she is guilty of something unimaginably atrocious.

Claustrophobia is made contagious by Merrill’s one-woman performance: she is constantly crouching, clinging to pvc pipe out of defense, pressing herself up against the wall on a tiny perch or squeezing in and out of a fireplace passage blockaded with suitcases and bricks (the suitcases left over from thwarted escapes; the bricks scrawled with messages like “Satan’s Whore; we’re coming for you”). She also manages to squeeze several personalities into her performance, seamlessly depicting conversations with her father, her brother, the dreadful Mr. Orange or others from her town. The flawless alternation between these voices and Anna’s own makes the audience entirely unsure about her sanity.

Unanticipated screams, bricks crashing through windows, sudden blackouts, and threatening voices coming from the darkness (“I’m on the first step… I’m on the second step now Anna… I’m coming to get you”): these conventional scare tactics layer upon the psychological thrills of this play, quickening your pulse and keeping you on the edge of your seat for the entire duration. My only complaint about the show, other than the over-simplified social formula drawn by Jeremy Menekseoglu’s script (Christian conservatives equal bad; liberal educators equal good), is that there is only one more showing left, next Saturday, so get your tickets now. (Joy Miller)