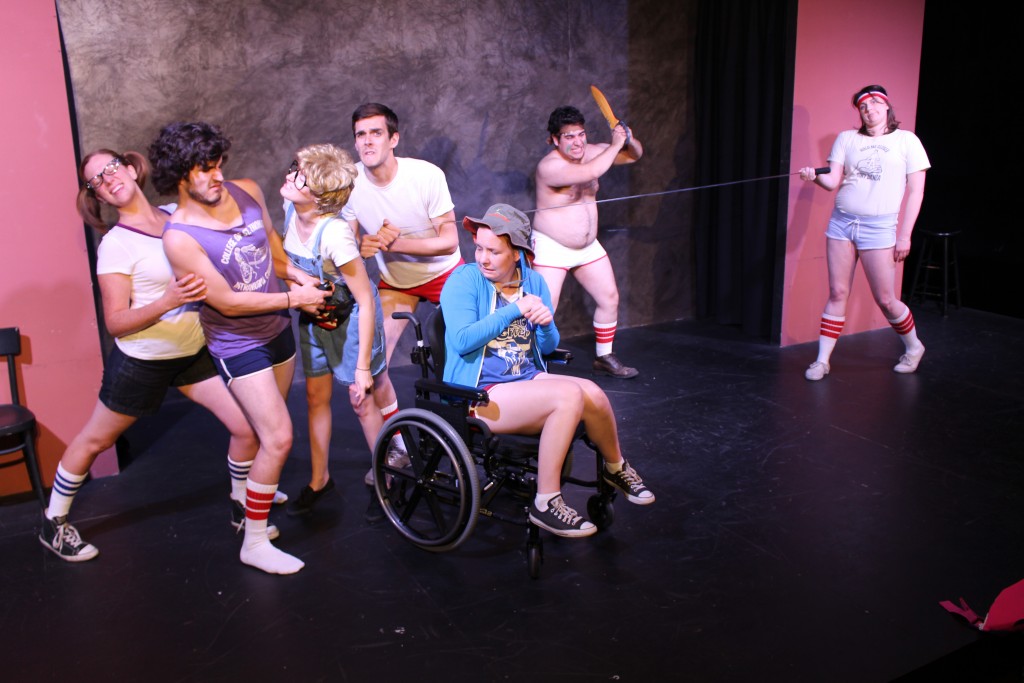 Regardless of what comes next, I want to say this: Under The Gun’s “Camp Tree Top” is Chicago’s premier onstage exhibition of short shorts. Bar none. Critics talk about “courage” onstage, but real courage is just four vertical inches of vintage rayon between you and the audience. That part of the show is downright heroic.

As for the rest? Welllll…

“Camp Tree Top” follows a group of Indiana campers and counselors as the summer winds down. They’re acting on feelings for each other while they face horror movie danger and urban legends. Mostly, the story plays background to a couple dozen short scenes stitched together with the skill of Ted Levine in “Silence of the Lambs.”

The show is written and performed by people trained in and familiar with the city’s improv norms and rhythms. And really, it’s all you can see onstage. You see it in the whip-fast scene changes, under-baked plotting, and random, unfunny outbursts of song. The underlying architecture is there (Murderers! Camp! Short shorts!), but the execution isn’t in the slightest. You can give a fashion design student a Marc Jacobs pattern, but those seams are going to stand out anyway.

“Camp Tree Top” mistakes volume for humor. You can’t make a joke that’s a “two” louder and hope it turns into a “ten.” When a theater features thumping bass from the bar downstairs (“The Humpty Dance” when I attended, if you must know) and the familiar rattle of the El just outside, the last thing you expect to think is “Well, this grating material is entirely too loud for the room.” Yet here we are.

Likewise, mild vulgarity is substituted for punchlines. Dick. Vagina. Did you just laugh really hard? Twice? If you didn’t, you’re not going to have much fun with the interplay between Heath and Samantha. Those are their verbatim punchlines. And they’re both written as thirteen-year-olds who want to have sex (it’s spelled out in the script). And he keeps calling her by the wrong name. If your idea of humor is an Amber Alert notification on your phone, you’re in luck. And I should inform you—the authorities are already on their way. (John Carruthers)