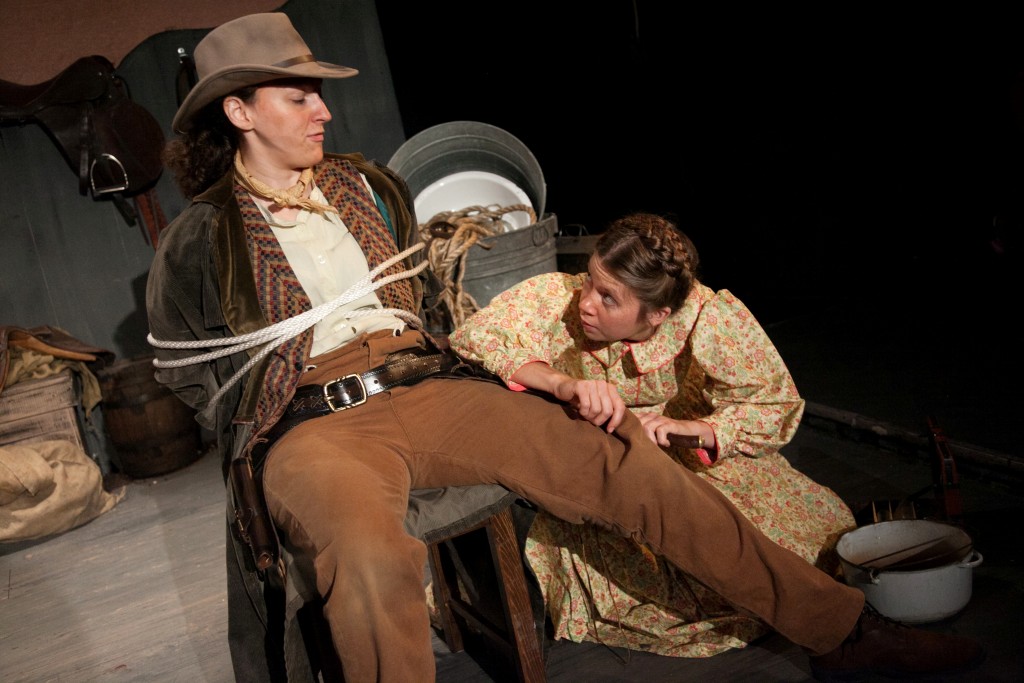 There are a substantial number of reasons why I should enjoy “Patchwork Drifter,” Jennifer L. Mickelson’s new work that opens Babes With Blades’ eighteenth season: it’s an all-female cast—always worthy of celebration; it’s a Western—a genre rarely seen in storefront theater; performances are, across the board, not bad—special mentions to Meredith Rae Lyons’ cautious Emmy and Zoe Shiman’s youthful Abigail. At eighty intermission-less minutes, it could be a punchy, energetic gallop through the West.

But there’s something off in the show’s atmosphere, beyond the obvious gunsmoke. The narrative about a drifter (Lyons) meeting a mother, Harriet (Delia Ford), and her two daughters (Eliza Rose Fichter and Shiman), slowly revealing secrets and catalyzing the daughters to rebel, takes a whiplash-inducing tonal shift in its final third. Suddenly, tragic backstories are everywhere, and with most of them delivered through dialogue, it rapidly clutters what was a simple story. Perhaps, though it would expand the show’s run time, the play would be better served by showing the backstories, cutting to flashback scenes with Harriet and her sister rather than spending a good five minutes of the play relaying them verbally, at gunpoint.

Of course, doing so might have caused me to label the whole backstory, which would inevitably mirror the present narrative, too obvious in its parallels. The daughter wants to marry the man with no future, and the mother worries about the daughter because of similar mistakes, but it’s true love, and so on. But that’s only a subplot. The larger plot is tangled up in the rapid-fire backstories, which, culminating with a somewhat unclear final scene, I had a hard time unpacking well enough to really get invested in the story.

That said, I respect Mickelson’s decision not to do “the obvious… put women in traditionally male roles” to fit an “overwhelmingly masculine genre.” Indeed, the intimate relationships of these Wyoming women are interesting enough to watch. I’d love to see where Abigail’s grasp of math leads—but it’s interrupted by gunfire. Maybe that’s why Westerns are so rare in storefronts; there’s no room for riding into the sunset. (Zach Barr)