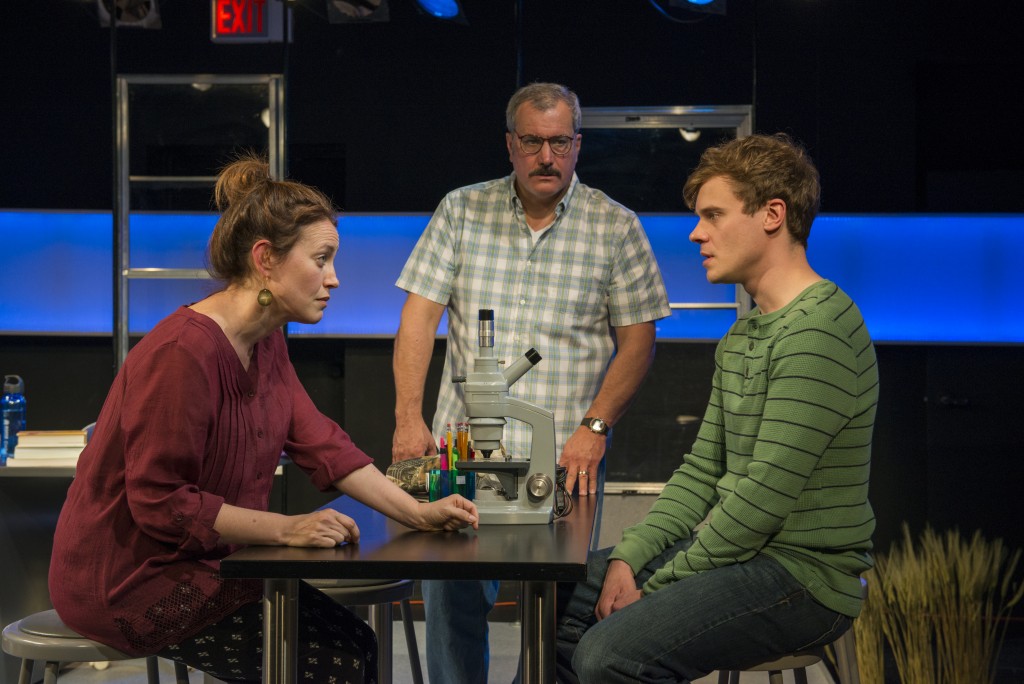 More than ever before, we are capable of surrounding ourselves with people who validate our belief systems. Sometimes it seems that the only way we will listen to those who don’t share our convictions is by isolating ourselves among them. And even then, would such a move bring about mutual understanding or deeper entrenchment? With this idea firmly in mind, Catherine Trieschmann’s “How the World Began,” a small play with hefty themes, pushes the seemingly irreconcilable differences of religion and reason to their breaking point.

Director Keira Fromm expertly guides this tensely contentious and profoundly uncomfortable play toward its wrenching finale with an all-star cast in tow. Fresh off his exhilarating turn in Steep’s “Brilliant Adventures,” Curtis Edward Jackson is proving to be one of Chicago’s most promising young actors. As Micah, Jackson is a quiet but imposing force capable of communicating great anguish with the clench of a fist or a furrow of the brow. Though his entire performance is worth savoring, when he finally allows his character’s inner torment to unfurl the results are truly devastating.

Providing contrast to Jackson’s sullen Micah, Keith Kupferer is pitch perfect as the neighborly Gene. As an actor, Kupferer transcends the textual bounds of character, imparting a full sense of life and history with the smallest, most humane of gestures. And as the tortured teacher in the crosshairs of this play’s “little misunderstanding,” Rebecca Spence is a talent not to be contested. On stage she is ferocious and wiry, looking as though she might bite the head off a rattlesnake without a moment’s hesitation.

Trieschmann’s dramatic focus shifts from one character to another in triangulated patterns such that any moment of unity is illusory. Each individual character is constantly dealing with two people they cannot possibly fathom. It’s a gutsy technique, one that pushes audiences to the edge of discomfort. By the time the play concluded, I felt as though I hadn’t taken a full breath in nearly ninety minutes. “How the World Began” is the kind of play that you will want to run away from but one you’ll be so glad you didn’t. (Kevin Greene)