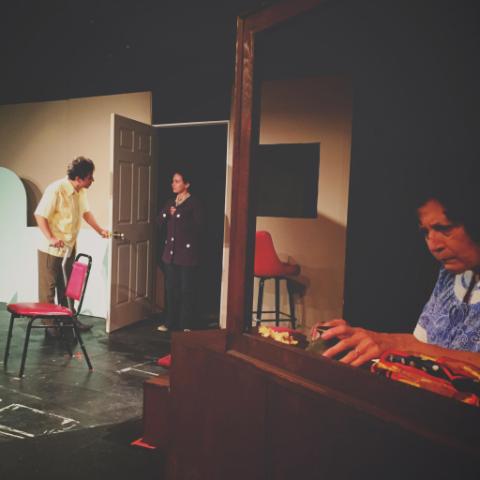 Storefront theaters vary wildly in professionalism from place to place, and when a curtain call concludes with the director getting onstage and introducing his mother, grandparents and music teacher—all present in the audience—there are two routes a critic can take. The first would be to dismiss the display as amateur, drawing a connection between the nervous curtain speech and the ramshackle set design to form an opinion on the production. The second would be to take in the context: this is the first production by the newly formed Visión Latino Theatre Company, the speaker is artistic director and co-founder Xavier Custodio, and the play in question is his child, of sorts.

Making its first steps, Visión Latino has its focus in the right place. Like any good play, the performances in “Yellow Eyes” are what carry the audience through, rather than the immense production values the company doesn’t have—or, arguably, need. Migdalia Cruz’s script, about a mixed-race girl named Isabel (Jackie Seijo) relating to her friends and great-grandparents, has a clearer plot in its second act, but by then the audience has invested enough in the distressfully realistic characters that any new action feels like payoff. At times, the direction from Custodio places characters in long, immobile conversations around tables or on benches that might benefit from more motion, but, like the script, this also improves in Act II.

In short, “Yellow Eyes” does feel like a first production—how could it not? The other two co-founders, Johnathan Nieves and Yajaira Custodio, are members of the cast. Bari Fleischer’s set, minimal but effective, has visible seams between flats in the back wall. The lighting, especially in one of the best scenes between Isabel and Sharon (Tara Marie Smith), is often unnecessarily shadowy. At times, the script is a touch overlong in performance. But even when nothing happens, I still watched with intrigue, wondering what could. I return to the performances, delicately navigating the tightrope between the play’s serious and comedic moments. All of which is a good omen for productions from Visión Latino in the future. (Zach Barr)