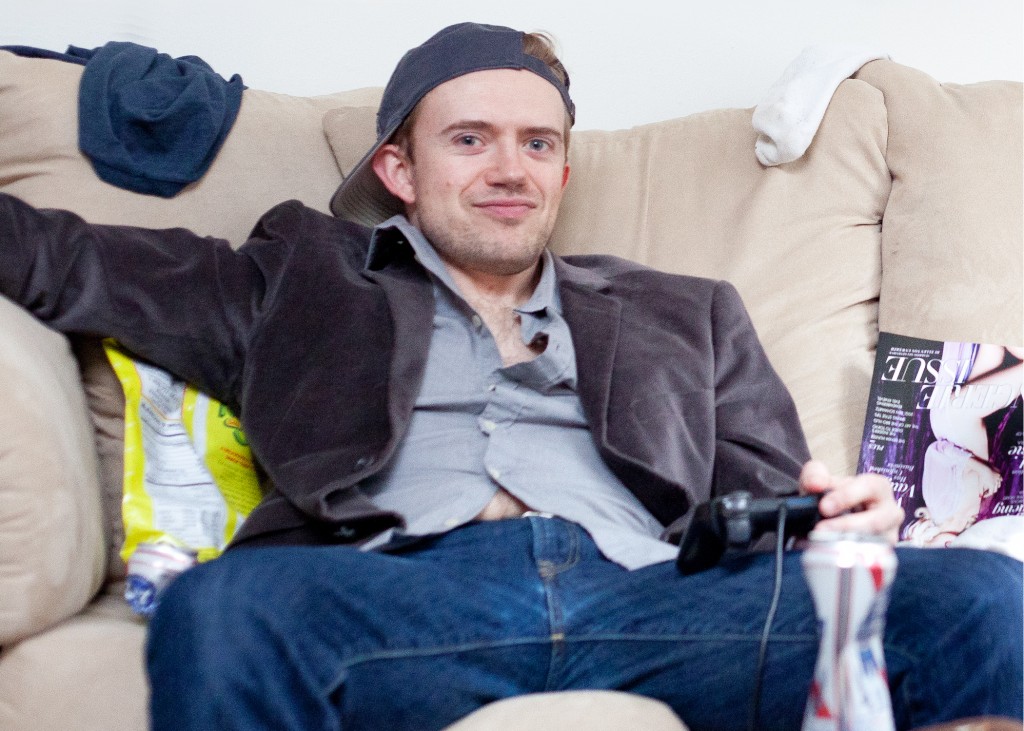 Scot Moore of “Men Will Be Boys”/Photo: Heidi Garrido

The Chicago Fringe Festival philosophy is one of minimal interference. There is little that suggests a policy of enforcement beyond the occasional presence of a Fringe staffer making sure audiences and performers vacate in a timely manner. And while this mentality gives opportunities to artists for whom Fringe represents a kind of be-all-end-all, I began to wonder if this hands off approach is ultimately detrimental to the overall quality of the Fringe experience. You can make the argument—and plenty of people have—that there is charm in the Fringe way of doing things. But charm and pleasure are different things and during my third day of the festival I found myself wondering if a little guidance wouldn’t be beneficial. Occasionally I even had cause to wonder if the performances I was witnessing constituted theater at all.

I began considering this potential policy shift after witnessing “Turn That Thing Around: A Manic Narrator’s Longest Ride,” a narcissistic and indulgent mess that eventually devolved into a cacophony of incoherence. Very obviously a labor of love—with emphasis on the labor—the play exhibited a common characteristic of young, underdeveloped work: the playwright’s inability to put critical distance between their experiences and their art. When I say young, I don’t necessarily mean it in reference to age but rather the artistic maturation process that allows a writer/performer to turn their view of the world into something communicable and relatable.

Case in point, former professional basketball player Terri Mateer, who obviously has had quite a bit more life experience than the twenty-somethings of “Turn That Thing Around,” yet nevertheless could not translate her authentic experience into a meaningful story. While Mateer might be a decent, if a little self-involved, motivational speaker, “A Kind Shot” lacked any kind of dramatic movement, physical or emotional. She employed a tone of relentless flippancy, recounting moments of sexual exploitation as if they were no more or less interesting than any other part of her life. Her conclusion that life is not like an officiated sport failed to recognize the flaws inherent in professional sports, which she herself clearly experienced regularly.

Between these two frustrating performances was a trio of insightful, humorous and engaging works, albeit ones that still posed problems for anyone seeking to define the character of Fringe. Bringing a play as established as Rajiv Joseph’s “Gruesome Playground Injuries” to Fringe might seem like poor taste given the festival’s emphasis on original content. Yet Grace House Productions’ version survived this scrutiny on the basis of pure acting grit. But while I found the performances in “Gruesome Playground Injuries” satisfying, the production itself lacked personality. Luckily, it was followed immediately by “Ankle Boots: Absurd Miniature Memoirs,” a delightful set of satirical Neo-Futurist-like sketches with strong feminist overtones. Predicated on a hold-nothing-back attitude, “Ankle Boots” proved one of the most inspiring and genuinely enjoyable hours I’d spent thus far at Fringe.

“Ankle Boots” dovetailed nicely with “Men Will Be Boys,” which ditched the former’s exaggerated expressionism for a more nuanced approach to the issue of sexism in our culture. In its attempt to be palatable to its characteristically liberal audience, “Men Will Be Boys” occasionally undermined potentially controversial viewpoints such as the psychological pressures put on men to be “manly.” The transformation actor Scot Moore undergoes as he navigates a series of increasingly likeable and well-rounded characters feels profoundly personal. There is the unshakeable sense that “Men Will Be Boys” is not only a well-sculpted work of art but one that allowed the artists working on it to come to terms with their own faults rather than presenting themselves as flawless ambassadors of higher reason.

The most satisfying works I’ve seen at the Chicago Fringe Festival have been highly intimate and dramatically inventive. It is helpful to think about these two qualities as being the poles where many Fringe performances land while the more rigorous and inspired among them fall somewhere in between. Yet in that very metaphor lays the indissoluble nature of Fringe. The very lack of standards that permits the insidious in turn also encourages the virtuous.

Fringe is a trust exercise; one that sometimes lets you fall backwards off the tree stump but other times wraps you up in its embrace. To offer a mixed metaphor, perhaps the real question is not whether the festival is obliged to separate the cream from the milk but rather, as a participant in this unpredictable process, is the elation of being caught worth the risk of the fall? (Kevin Greene)