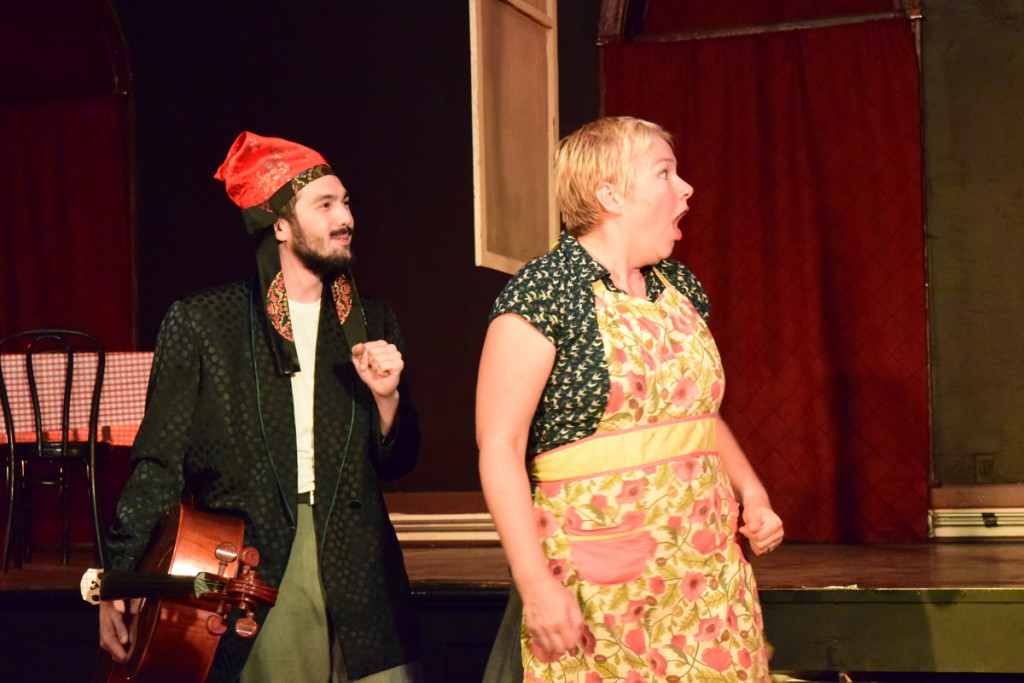 If you consider yourself a true theater aficionado; if you like collecting shows you’ve seen and theaters you’ve been to; if you don’t mind some nonsense; if you enjoy shows that are well-crafted and thrifty; if you haven’t seen any theater south of the Loop (not counting The Court) this year or ever; if you’ve never read or heard of Mac Wellman or his “The Hyacinth Macaw, ” then get thee to The Bridge tout de suite.

Directed by Kestutis Nakas, “The Hyacinth Macaw” has an inherently loose narrative. In the town of Gradual, Susannah (Kasey O’Brien) has a ninety-nine-year contract to take care of the neighbors’ enormous cats; the moon is dying and must be buried; Susannah’s father, Ray (Robert L. Oakes), discovers that he is “a duplicate” and must return to Mimbreland, the land of evening; a mysterious black-suited man (Brian Grey) shows up with an obtuse letter regarding Ray’s duplication, tantalum and tarbooches. As Ray explains, it is a letter “whose basic meaning comes down to ‘your soul has spontaneously combusted.’”

Obviously, the language loses itself in delicious play throughout the show (“I should watch my behavior.”—“Your behavior should watch itself! Leave it alone!”). But, despite the linguistic acrobatics, the actors seem to know precisely what they are saying, all of the time, save for when they’re supposed to not know what it is that they’re saying. In the way they deliver their lines—with ease, with crescendos and decrescendos, with urgency, leisure, with melody—they manage to convince the audience to course along with them on their soliloquies, arguments and toasts, paying attention to the sensuality of the language more than the sense.

A few soliloquies wax a little too poetic for a little too long. Otherwise, a generous viewer is granted a quirky gift for sitting through this two-hour-and-fifteen-minute production. If you want to feel poetic, if you want to feel a bit odd, or if you already feel a little odd and want some good company, then, head to the church (the First Trinity Lutheran auditorium) and see “The Hyacinth Macaw.” (Joy Miller)