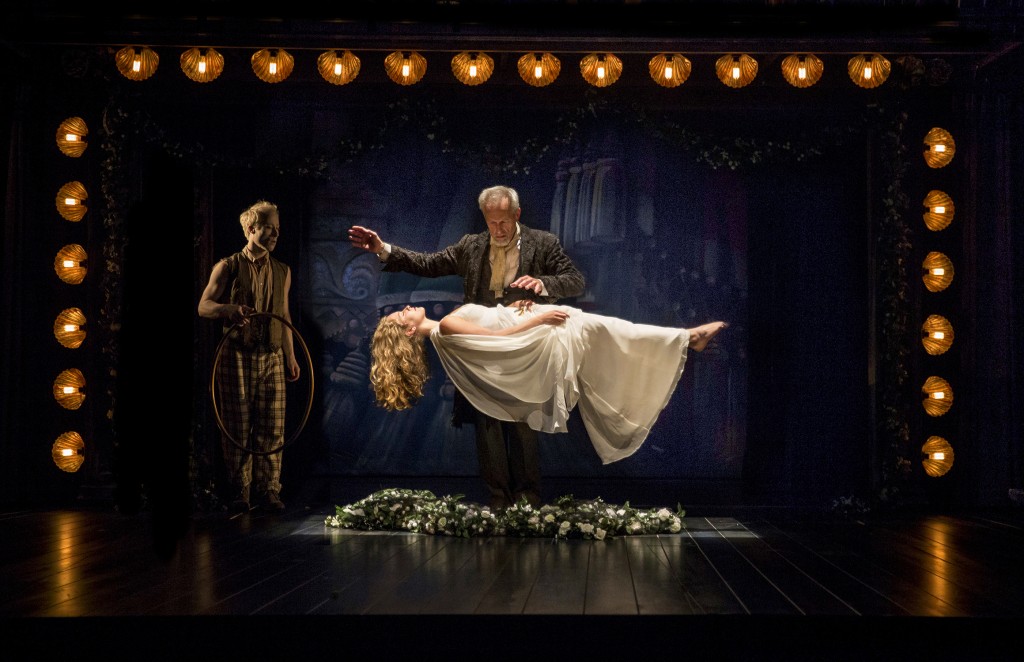 With all the magic in Shakespeare’s plays, “The Tempest” still stands out for its wizardry, with the magician Prospero using supernatural forces to both seek revenge and achieve closure for past wrongs done to him. So it makes a piquant kind of sense for world-renowned magician Teller (the silent half of the Penn & Teller duo) to choose to co-adapt/direct (along with Aaron Posner) this particular show by the bard.

And it’s clear from the start, with an impressively mind-boggling staging of young Ferdinand’s apparent drowning in a storm, how seamlessly acts of magic can be incorporated into this story. Add to this a soundtrack of atmospheric Tom Waits music performed and sung by live musicians and the bizarrely innovative choreography from modern dance collective Pilobolus (as personified by Zach Eisenstat and Manelich Minniefee, the two-person Caliban is captivating) and Chicago Shakespeare has got a truly Shakespearean spectacle on their hands.

The cast delivers as well, with Lawrence Grimm as the dastardly Antonio and Luigi Sottile as the earnest Ferdinand standing out in the supporting cast. If I were to quarrel with anything, it’s the decision to give the musician Stephano (Chicago stalwart Ron E. Rains) a strong Southern accent and have him and Adam Wesley Brown’s Trinculo interact with the audience. It’s sufficiently distracting to warrant some toning down.

I saw a previous incarnation of this show (with some of the same actors, including the topnotch actor/magician Nate Dendy as a doleful Ariel) in Boston last year, but this production stands above that one, not least of all because of the thrust stage at Chicago Shakespeare that brings a good deal of the action (though not much of the magic—sightlines are pretty important to these illusions) out into the audience. This production also has the benefit of veteran Chicago actor Larry Yando as Prospero, endowing the elder magician with an exhaustive sense of purpose and anger that makes his granting of forgiveness all the more affecting. When Yando delivers the line “We are such stuff as dreams are made on; and our little life is rounded with a sleep” there’s as much spine-tingling magic in that delivery as in the rest of the show. (Zach Freeman)