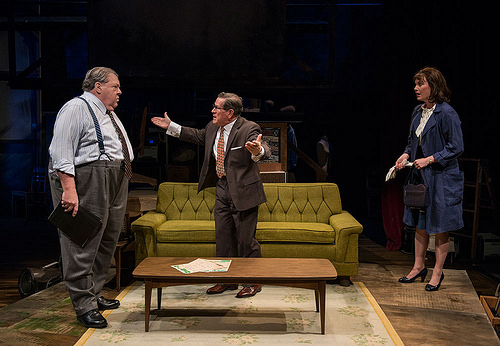 Comedy gets very little respect, considering how difficult it is to perform. As a comic like Chick Sherman, the suffering, titular funnyman in Bruce Graham’s new play at Northlight, will attest, there’s more to it than simply telling jokes. There’s an art to establishing a scenario, perfectly building up the audience’s expectations, and finishing it off with the perfectly timed payoff. If any moment misses, the piece falls flat.

Of course, “Funnyman” is not a comedy, strictly speaking, though comedic moments do occur. Centrally, the play concerns Chick’s return to the stage, after forty years in Broadway comedies and a lucrative-if-exploitative commercial deal, in an off-Broadway absurdist play that he barely understands. Much of the play’s success rests on the shoulders of its leading man, played deftly and powerfully by George Wendt. As he wrestles with the script, the audience slowly discovers the man within the comic—the man who did impressions in restaurants for children and then returned to ignore his daughter Katharine (Amanda Drinkall).

Katharine’s skills as an archivist drive the play’s subplot, concerning her efforts to finally learn more about her father’s past and her deceased mother. She is assisted, or bothered (take your pick), by Nathan Wise (Michael Perez), a coworker whose romantic interest in her becomes another subplot—one that the play could probably do without. Katharine’s search leads her to Chick’s agent, Milt “Junior” Karp (Tim Kazurinsky), who has many clippings on Chick’s history, almost distractingly easily accessible.

Naturally, Chick’s past begins to catch up with him, and Wendt’s performance is well worth a viewing. But, tying back to comic constructions, the payoff isn’t as grand as one would expect. Say the play began with Chick wheeling out a large cake emblazoned with the words “do not fall into.” After plenty of antics around the cake, narrowly avoiding it, Chick trips and softly lands in it. It’s a payoff, yes—even the payoff we wanted—but wouldn’t there be more misery (and thus more comedy) if he went flying into the side of the cake, splattering frosting and crumbs all over the room? (Zach Barr)