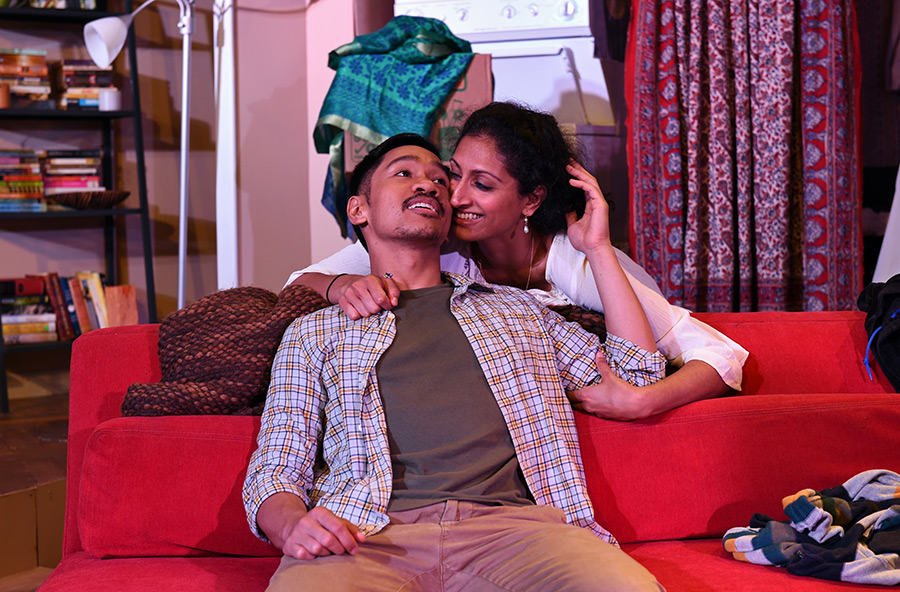 “An Asian actress?” A character in Nandita Shenoy’s “Washer/Dryer” laughs in utter disbelief that such a thing could exist. It is that mindset coupled with the lack of diversity seen on Chicago stages that birthed Rasaka Theatre Company, with its focus on South Asian artists and South Asian stories. How refreshing to see that these artists and experiences are not as unlikely as the character would believe, but a tangible reality seen in “Washer/Dryer.”

The play follows a day in the life of multicultural newlyweds Sonya (Rasika Ranganathan) and Michael Lee (Bryan Bosque). They’ve got their rings and now they have moved in together. There’s one problem—Sonya’s apartment is “single occupancy only,” which will most definitely put her at odds with her by-the-book co-op president  Wendee (Erika Napoletano).

The couple’s troubles don’t end there—what would a “perfect day” be without a visit from Michael’s overbearing and judgmental mother Dr. Lee (Cheryl Hamada), who is not a fan of his new wife? Add their nosy flamboyant neighbor Sam (Omer Abbas Salem, who steals the show with charisma and comic timing) in the mix, and an already great day just gets better.

“Washer/Dryer” is a lighthearted comedy that may take a while to heat up, but is highly entertaining once it does. However, the play is not without problems, principally staging. At times it can be difficult to see; audience members next to me leaned forward at one point to make out what was in a bag characters were looking in and holding up, because only those in the front could see clearly.

Sightlines aside, “Washer/Dryer” makes for a fun night out. (Loy Webb)