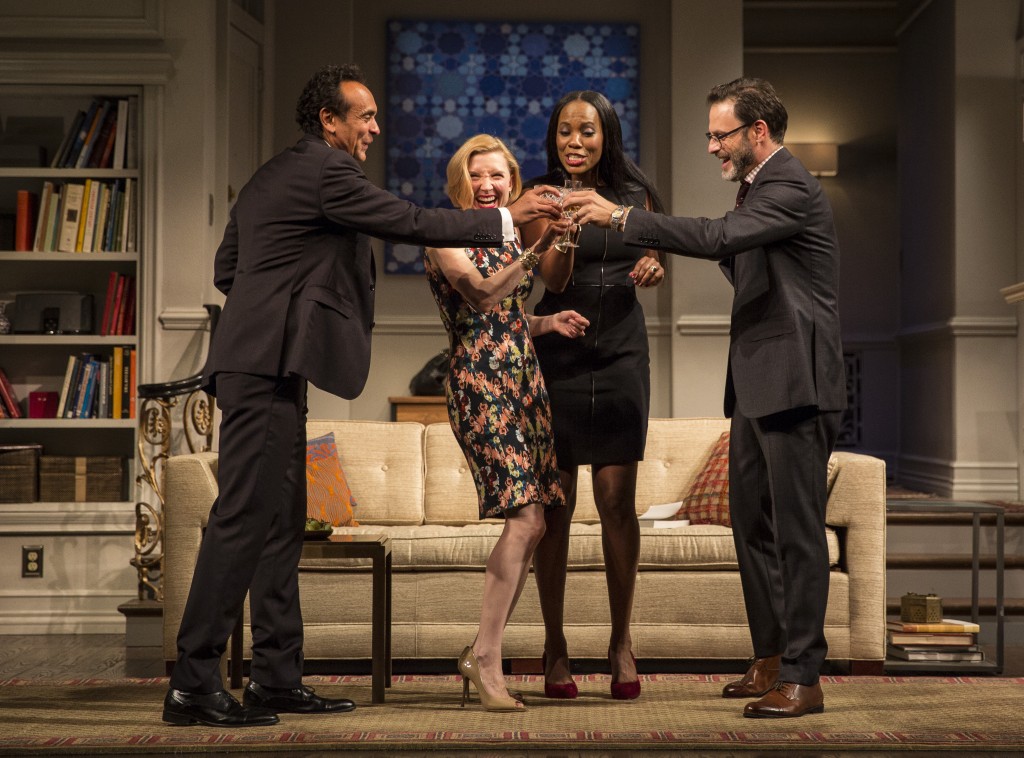 The setup is that of a globalized, post-modernized update of “Who’s Afraid of Virginia Woolf?,” as two culturally upscale couples get together for an evening that goes very, very bad. Later on, Ayad Akhtar’s “Disgraced” seems more a latter-day take on “Othello,” as its dark-skinned protagonist sees his success-kissed dream of a life with his blonde American wife and Charvet shirts go kaboom, the victim of social prejudice and inner insecurity.

It’s a story that could pack a wallop, shedding light on the purulent xenophobia that threatens to define the Age of Trump. But the work fails as tragedy because its core character, the swaggering corporate lawyer Amir Kapoor (Bernard White), lacks stature and insight, so that his fate evokes not so much terror and pity as grim satisfaction and a touch of relief.

The play—with its Pakistani protagonist, his WASPy artist spouse, the Jewish curator planning to showcase her painting, and his African-American lawyer wife—is all about tribalism, as the various relationships fissure under pressure along the lines of race, religion, ethnicity. But underneath director Kimberly Senior’s overheated conflicts is the depressing truth that these squabbling careerists are all members of one clan, that of the Narcissistic One Percenters, their similarities outweighing their petty differences.

Spouting lawyerly bile and artsy blather (“The Islamic tile tradition is a doorway to freedom,” says Emily of her painting, which would look better in linoleum), the foursome reveal themselves as capable of serious group negativity. Leading the hate parade is Amir, the apostate Muslim who reviles his own heritage. He is trapped in the Groucho Marx paradox of being unwilling to join any club that would have him as a member.

Bernard White plays the existentially shaky Amir as one big clenched muscle, while Nisi Sturgis’ rushed, breathy performance as his wife also shows more effort than grace. J. Anthony Crane as the curator and Zakiya Young as his sassy, teasing wife provide the play’s only taste of normal affection and connection, which will be tested during the evening.

But Akhtar’s heavy-handed, button-pushing script makes it difficult to care about any of these characters. In the end, the playwright’s inspiration seems to be neither Albee nor Shakespeare, but rather Jerry Springer, moralizing smugly from on high about the human weakness, aggression and paranoia that are his bread and butter. (Hugh Iglarsh)