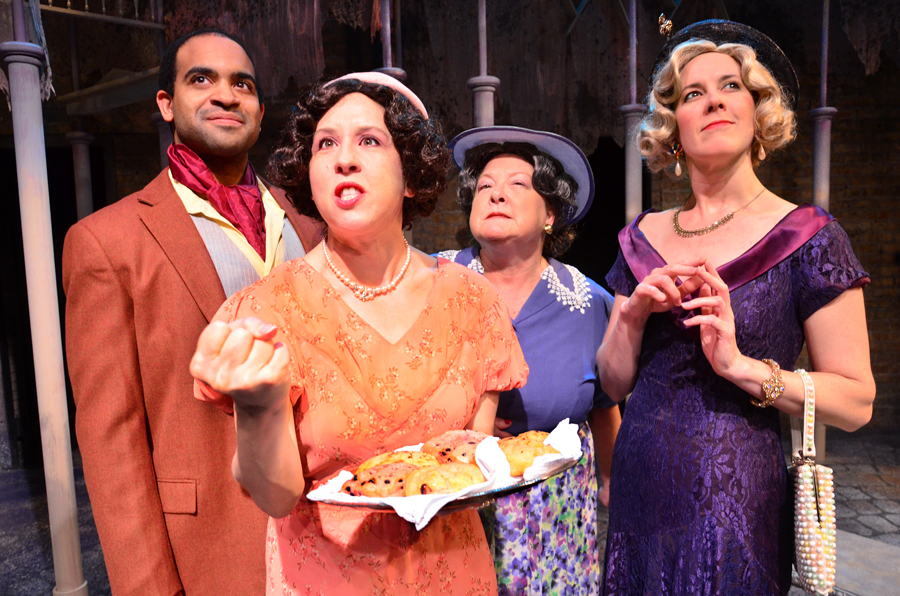 With only three months left in 2015, I am pretty sure that I can safely dub “Miss Buncle’s Book” at Lifeline Theatre one of my favorite plays of the year. I cannot be sure it will remain on top as there are about 100 days left before 2016, but it is a safe bet that it will remain in my personal top five.

The show has charm, wit and a protagonist that gains your support the moment you meet her. The small and mousy Barbara Buncle (Jenifer Tyler) has written a fictional exposé of her hometown of Silverstream, England. Her book becomes wildly popular, which is not particularly appreciated by the people of her village. It is a good thing she wrote her book under a pen name, for some of the villagers are out for blood. You see, the book points out how terrible the people of the town are, and at the same time suggests ways that they can become better. Some of them actually adopt the suggestions within Miss Buncle’s book, others fight progress tooth and nail.

Katie McLean Hainsworth takes a stellar turn as the town’s vicious busybody and former chorus girl, Mrs. Featherstone Hogg. While Miss Buncle is the hero of the story, much of the action is driven by the efforts of Hainsworth’s character. Two additional standouts are Sean Sinitski and Tiffany Oglesby as Col. Weatherhead and his beloved Dorothea Bold, respectively. Their briefly portrayed romance gives a sense of magic to the goings on, as they are the first people to be positively influenced by Miss Buncle’s controversial work. Oglesby also appears as one of the strongest characters in the play as Miss Buncle’s only local friend, Sarah Walker.

Director Dorothy Milne’s cast is consistently solid and each actor makes changes in character and costume appear seamless. As they struggle with what to do about having their lives put forth for all the world to see, the citizens of Silverstream show themselves to be highly entertaining, even in their darkest moments and especially in their brightest. (Christopher Kidder-Mostrom)