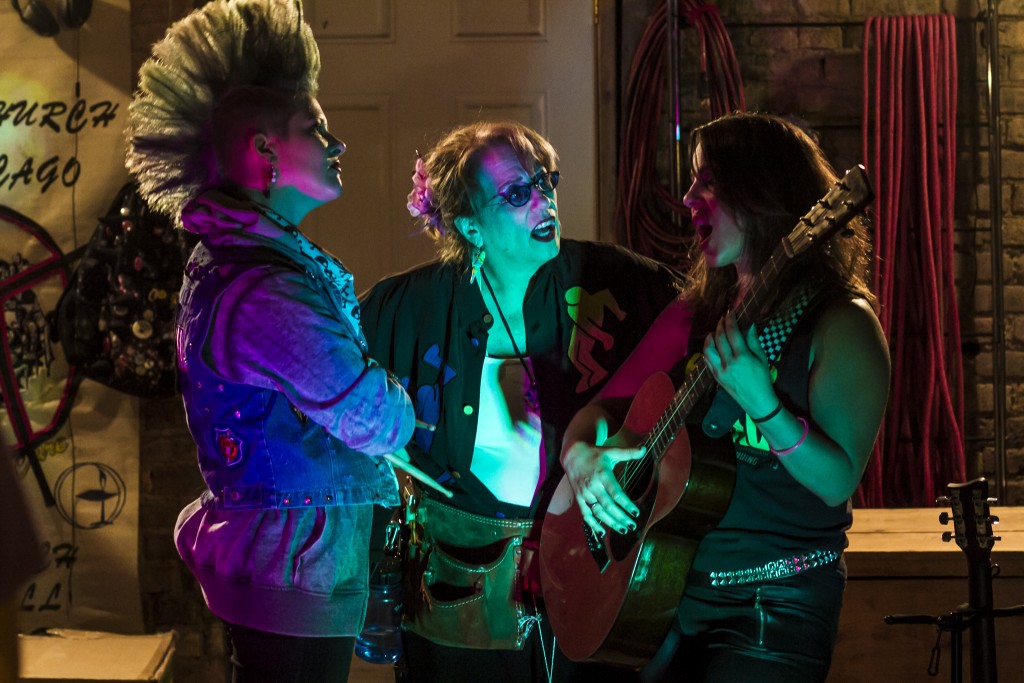 The promises of punk are freedom and acceptance, which are, in the abstract, opposites. Punk is no stranger to contradiction. For decades, the iconic imagery of youthful rebellion has been channeled into outlet malls and music festivals sponsored by Anheuser Busch. These days what looks like punk usually isn’t. To point: while there may be plenty of fishnet shirts, denim jackets, patches, buttons, and fast, angry music in Nothing Without a Company’s premiere of “Punk Punk,” there is little that constitutes the actual spirit of punk.

At first it seems like playwright Hannah Ii-Epstein and company are in on the joke. Punk isn’t dead, it’s on sabbatical. There are some good jabs at Riot Fest and several sharp observations regarding the current state of corporate music culture. But “Punk Punk” quickly loses the thread of satire. While the play’s music (written by Ii-Epstein and credited to Birthday Cake, the play’s fictional band) suggests a kind of tongue-in-cheek critical distance—the image-obsessed young band desperately trying to look the part without possessing any of the necessary inspiration or talent—the songs themselves lack anything that proves this theory. In fact, much of the play seems to closely resemble the very thing it is attempting to satirize. Perhaps this is the point. Even so, the lack of clarity in terms of intention negatively affects the entire production.

All of which is a shame since the play’s image of female camaraderie is actually quite touching. There is real chemistry between Anna Rose Ii-Epstein and Caroline Wright that is wasted on blown lines—in both senses—and crushed beers. The DIY aspect of the play, which takes place at a secret location, promises titillating returns but, as an unrefined space, doesn’t succeed in being anymore raw or stimulating than what is readily available at the comparatively ritzy storefronts around town. Like its two would-be stars, dreaming of punk celebrity on their own terms, “Punk Punk” gets lost in the murky middle ground between what it is and what it wants to be. (Kevin Greene)

Nothing Without a Company, Fat Cat Bar, 4840 North Broadway, nothingwithoutacompany.org, $5-$30. Through October 10.